This survey by YouGov gives  a clear insight into Labour’s problems: young voters backed Labour, but when they turned 39 most had left the party.

Another point: class was not an issue. Education was. The majority of those with little education voted Conservative (58%) while those with a degree voted Labour (43% against 29% who voted Tory).

Age is still the biggest dividing line in British politics

In the EU referendum and again in 2017 age was a new dividing line in British politics. The data indicates that little has changed on this front over the past two years, with Labour still winning a majority of younger voters and the Conservatives miles ahead among older Britons. 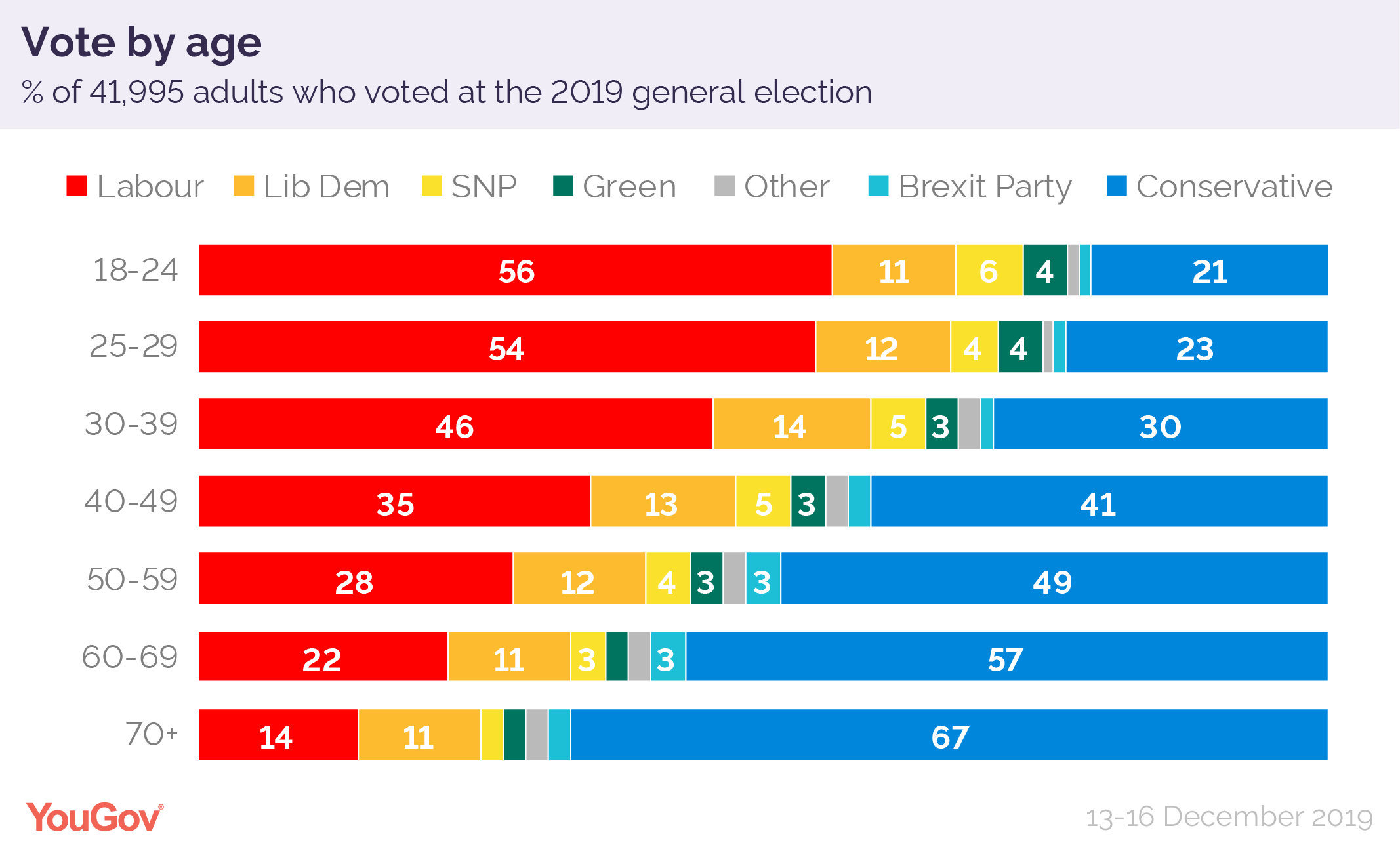 In fact, for every 10 years older a voter is, their chance of voting Tory increases by around nine points, and the chance of them voting Labour decreases by eight points.

The tipping point – the age at which a voter is more likely to have voted Conservative than Labour – is now 39, down from 47 at the last election. 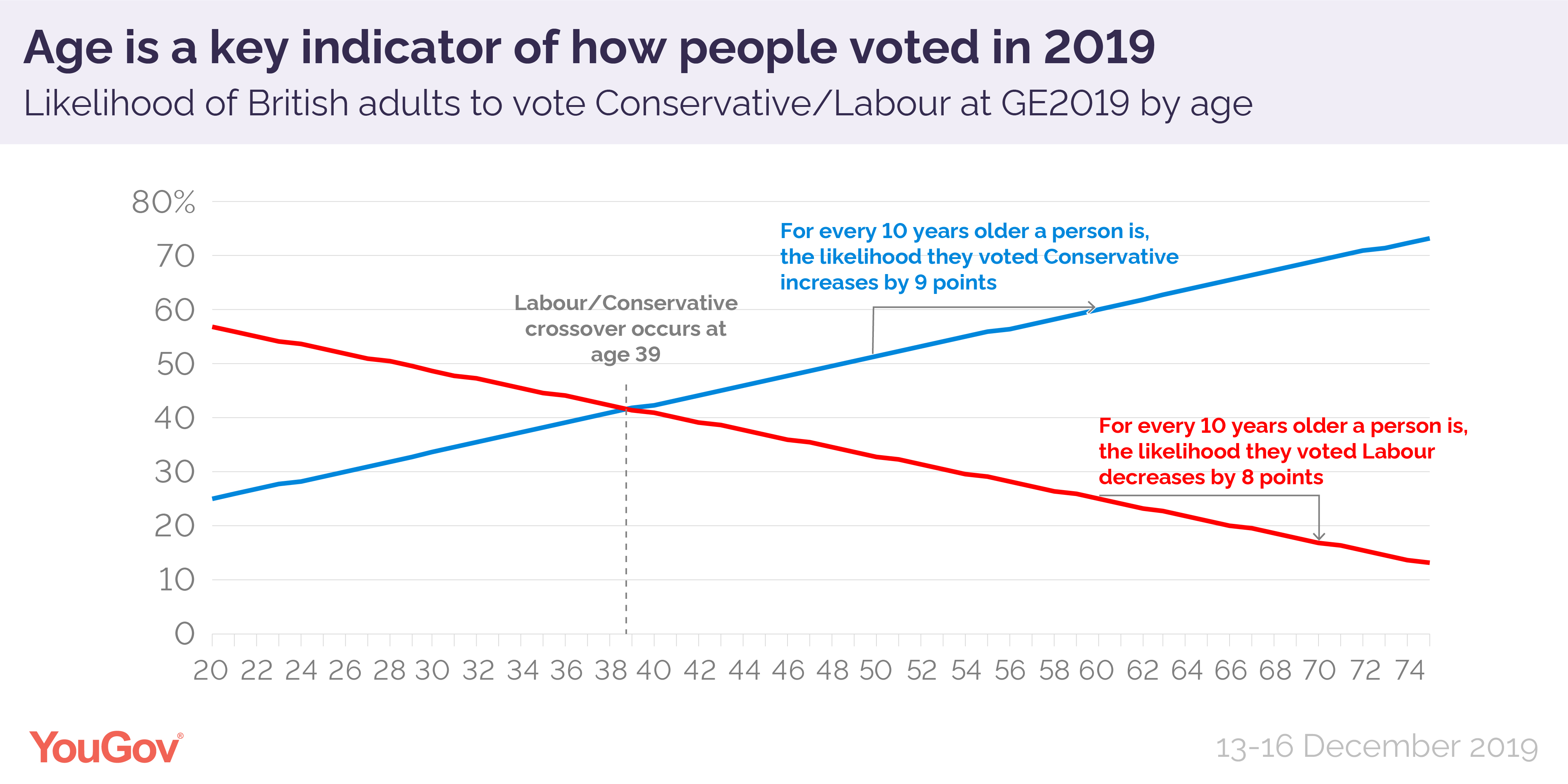 Labour is down among all age groups, although slightly less so among those nearing or in retirement, losing just 5% of their vote share among the over 60s, compared to around 9% among the under 60s. However, given how badly they did among the over 60s in the last election, they didn’t have much more to lose.

There is a gender gap, but only among the young 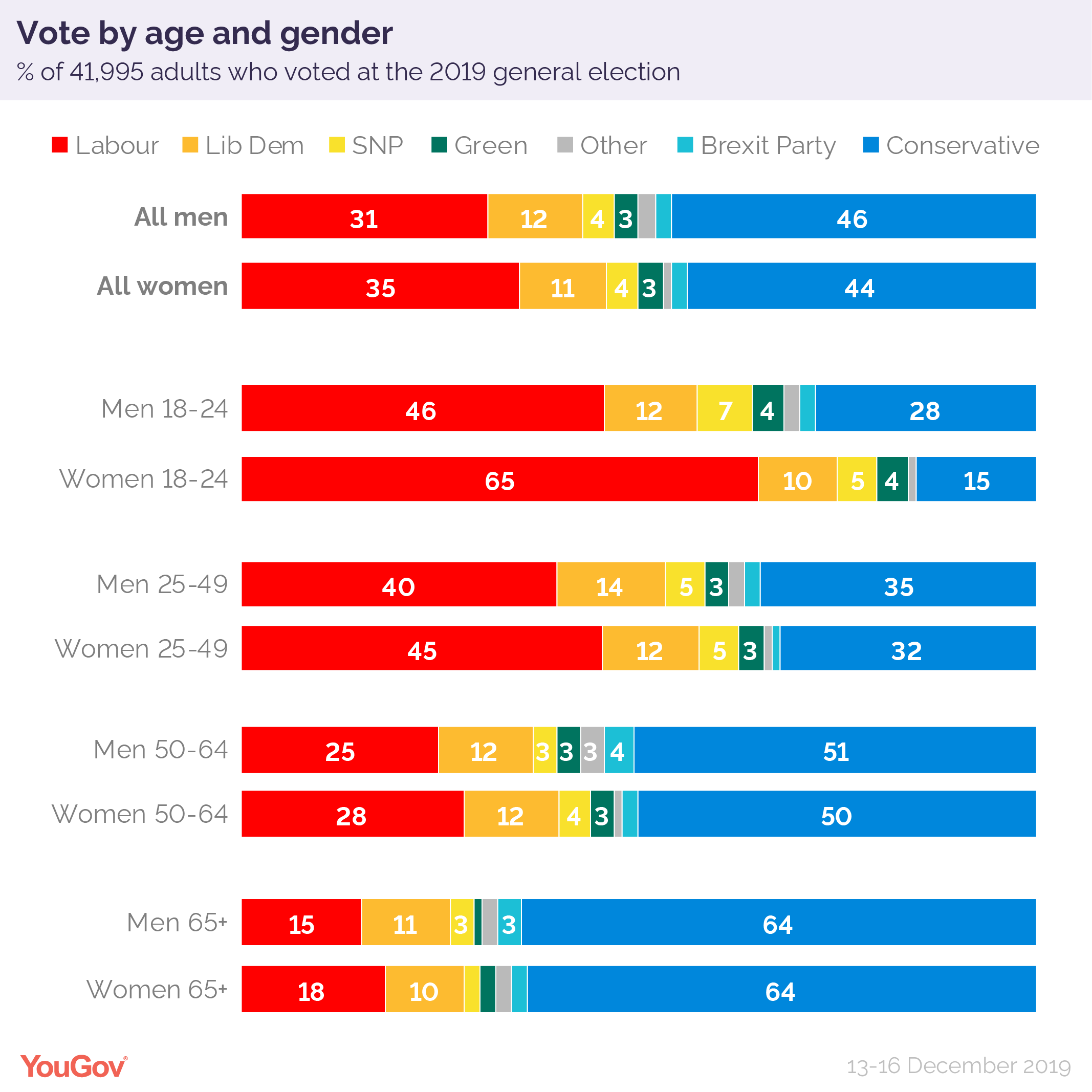 But when you break this down it is most evident among the very youngest. If we just look at those aged from 18 to 24 the Conservatives are on 28% among men and just 15% among women.

The Conservatives comfortably outperformed Labour across all social grades, further evidence that class is no longer a key indicator of how people vote. In fact, the Conservatives actually did better amongst C2DE voters (48%) than they did amongst ABC1 voters (43%). Labour performed the same amongst both social grade groups (33%). 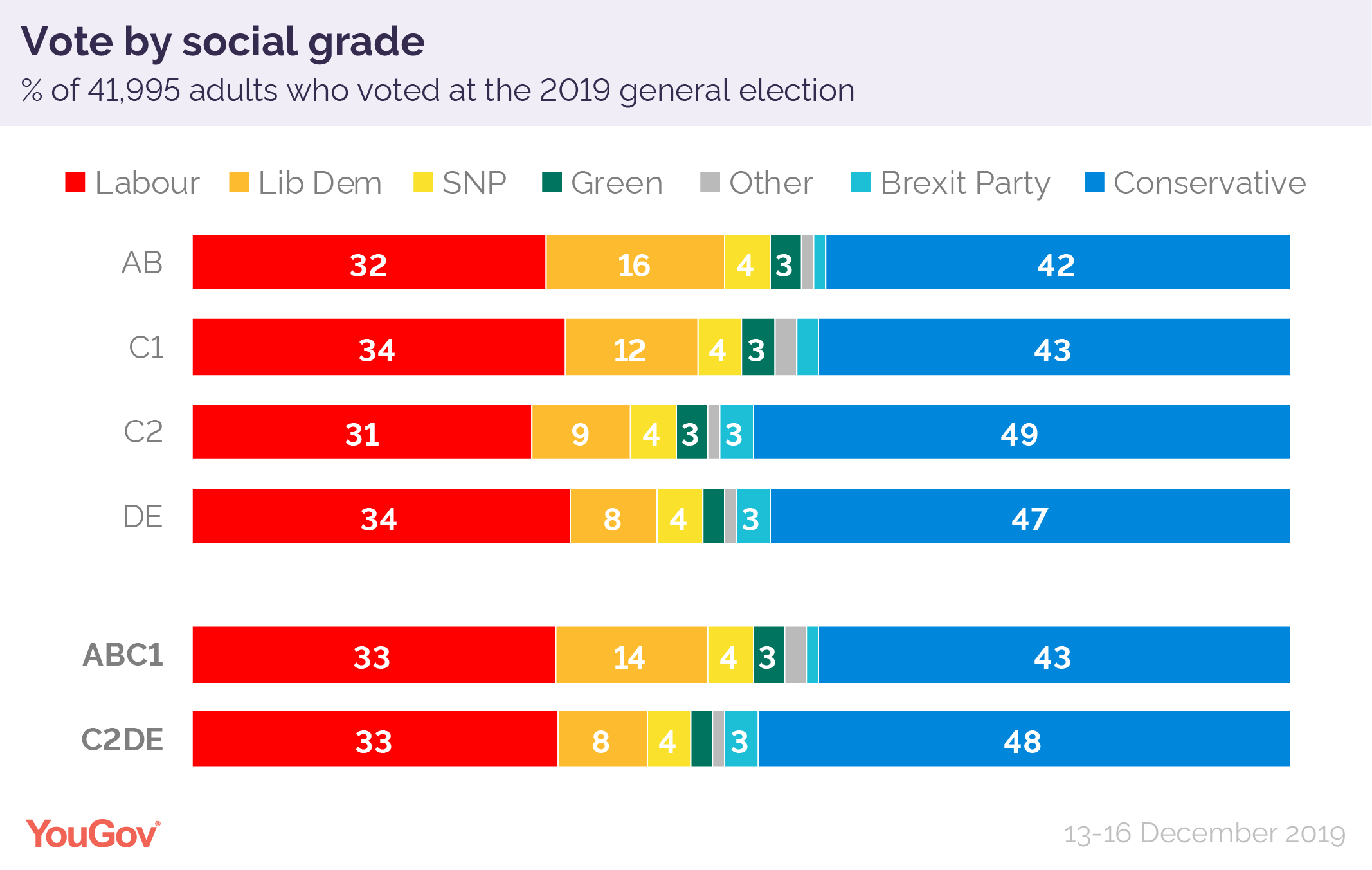 This is a further realignment of voters by class that we first saw in 2017. The Conservatives performed equally well amongst ABC1 voters and C2DE voters (44%) two years ago, marginally better than Labour in both cases. Now they have improved their showing amongst C2DEs while achieving the same as 2017 amongst ABC1s.

The highest level of education someone has achieved remains an important dividing line in how people vote. Labour did much better than the Conservatives amongst those who have a degree or higher, by 43% to 29%.

The Liberal Democrats also performed very well amongst this group with 17% of the vote share. We saw in 2016 that those with a higher education level were overwhelmingly more likely to back remaining in the EU, and this has seemingly transferred into party voting. 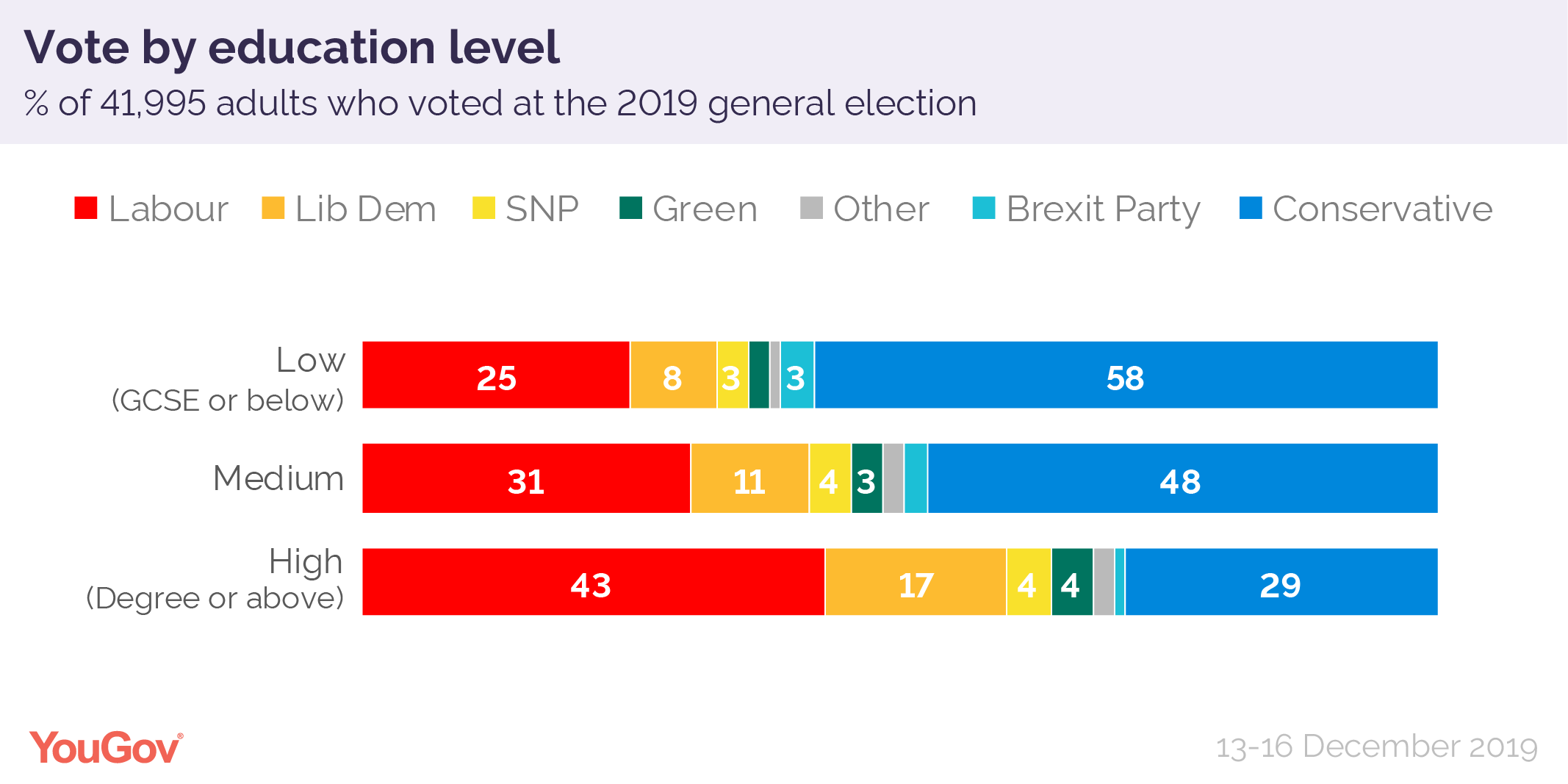 The Conservatives won amongst the much larger group of voters who do not hold a degree, however. They outperformed Labour by more than two to one (58% to 25%) amongst those whose highest level of education is GCSE or lower.

Retention of 2017 voters was crucial to Conservative success

The Conservatives did a much better job than Labour of retaining their 2017 voters. Some 85% of those who voted Conservative in 2017 stuck with them in 2019, compared to 72% of Labour voters.

The only party with a better retention of 2017 voters was the SNP, who kept hold of 87% of their past voters. 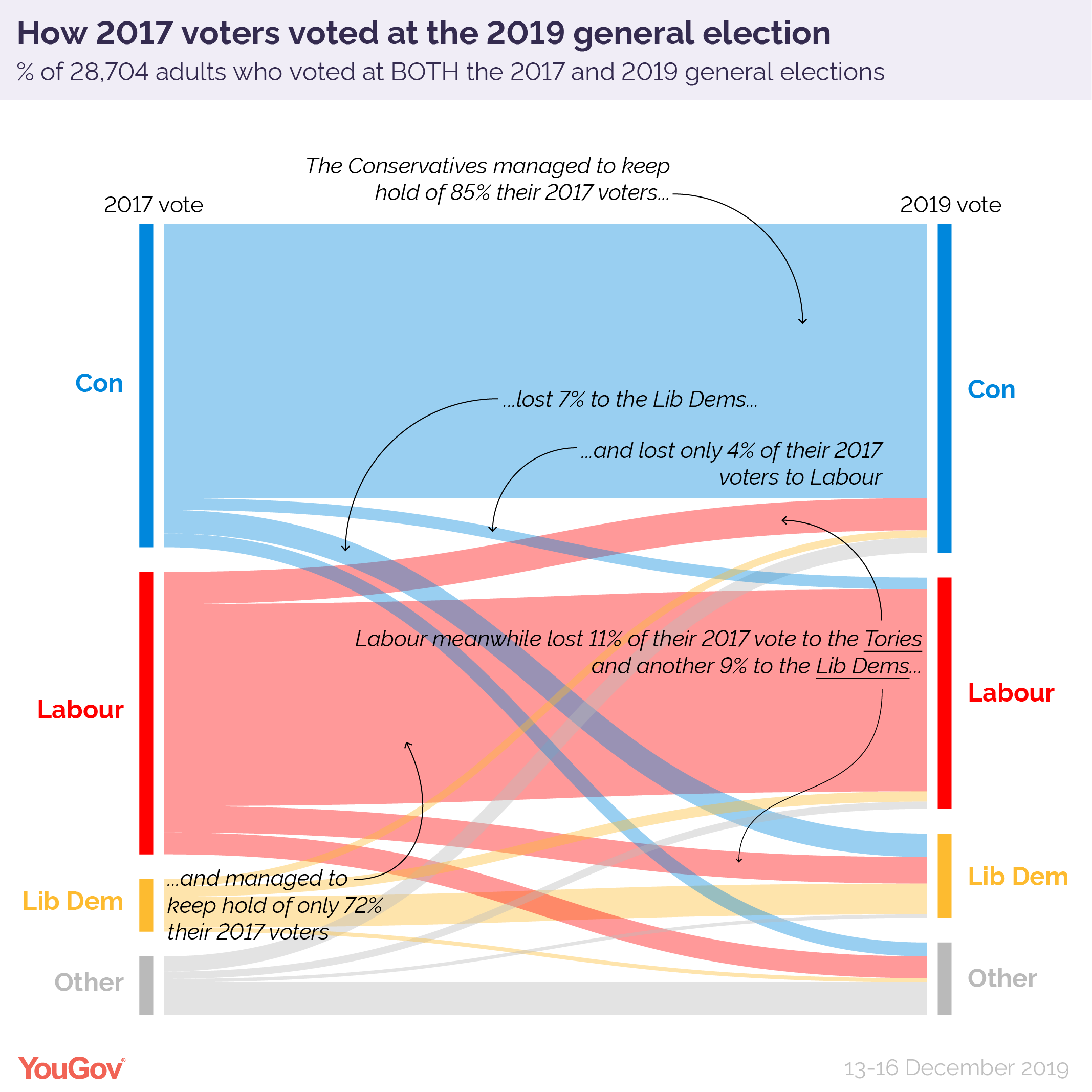 Despite improving their overall vote share from 8% to 12% this election, the Liberal Democrats only retained 59% of their 2017 voters. One in five of this group moved to Labour and 14% voted Conservative.

This loss of voters was balanced by winning over new voters from across all other parties. The Greens also struggled with retaining their 2017 voters (keeping just 30%) with a third (34%) moving to Labour.

Brexit realignment was already a huge factor in the last general election, with 55% of Remainers voting Labour and 65% of Leavers voting Conservative. 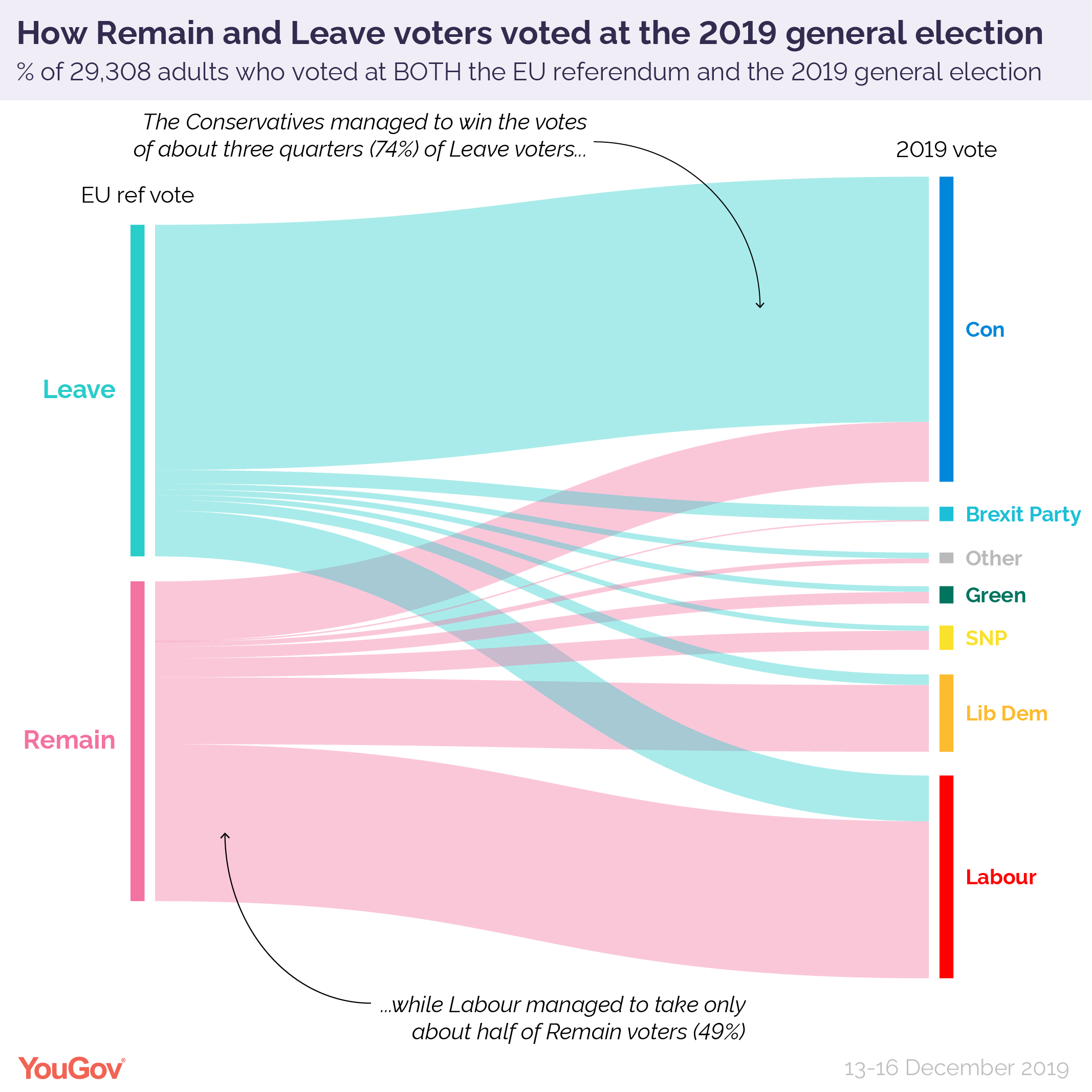 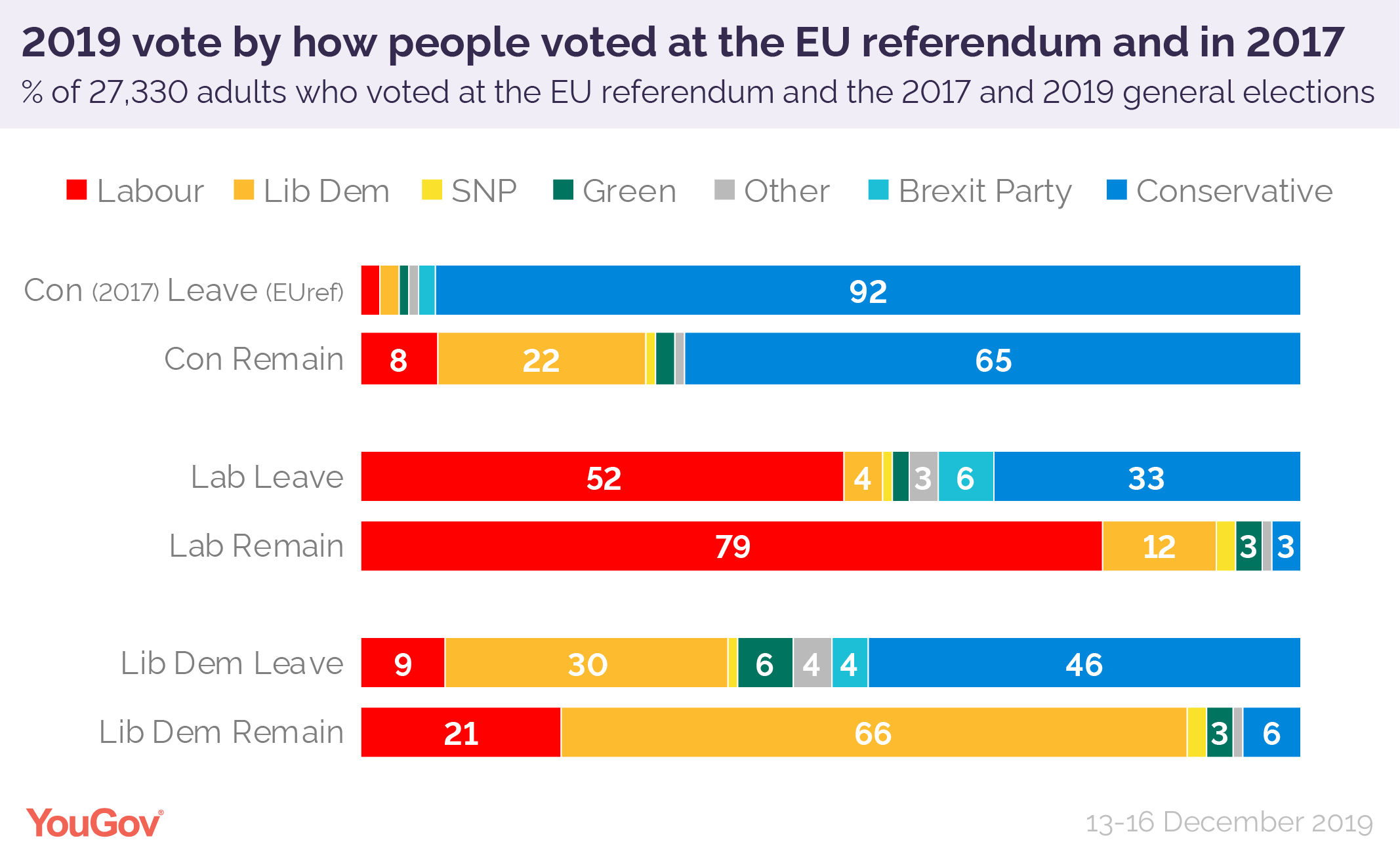 Despite their strong stance on leaving the EU, the Conservatives managed to convince two thirds (65%) of their voters who backed remain in 2016 to stick with them this time round. 22% voted Lib Dem, while 8% moved to the Labour party.