At 5:00 am on 3rd October 1935, the Italian armed forces, commanded by General Emilio de Bono crossed the Merab River from Eritrea.

The invasion of Ethiopia was under way. Last ditch attempts by the Emperor Haile Selassie to halt the invasion by leasing half of Ethiopia to Standard Oil had failed.

Thousands of Eritrean colonial troops, recruited and conscripted by the Italians, participated in the advance.

Above is a press photograph dated 15th October 1935. Its caption reads: “A group of Native Eritrean troops with the Italian army in Ethiopia, are shown assembled before the march on Aduwa.”

Soon the Italian led forces – who had not bothered to declare war on Ethiopia – were advancing deep into Ethiopia.

The map sent out to the press had this caption: “”Addis Ababa, Oct. 5 – War on three fronts: Italians are reported pushing into Ethiopia along the three fronts indicated, frequently using bombing planes to prepare for the advances. One of the main Ethiopian forces is reported at Dessye.”

On paper the forces may have been relatively evenly balanced.

Indeed, there may have even been an Ethiopian numerical advantage, with around 800,000 troops 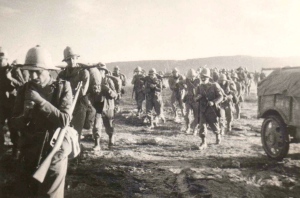 In reality the balance was always in Italy’s favour.

For a start, the Italian troops were better trained and armed. The photograph (right) is captioned: “Marching towards the enemy: the vanguard of the Italian troops push on to Makale. The Italian soldiers wear heavy boots to protect their feet from the rough ground that the Ethiopian warriors traverse barefoot.”

It was not just boots that the Ethiopian army lacked.

Only about one-quarter of the Ethiopian army had any kind of military training and the men were armed with 400,000 rifles of every type and in every kind of condition.

Then there was the critical difference in armaments.

Ethiopia had an airforce of just 3 planes. Italy could mobilise nearly 600.

“Mussolini’s tanks break through a stone wall and climb a hill to clear the way for the advance of the Fascist legions on the northern front” is how this photograph is captioned. It is dated 6 November 1935.

Clearly outgunned and attacked with poison gas, the Ethiopian forces had no alternative but to retreat. On 2nd of May 1936, the Emperor Haile Selassie boarded a train and left the capital en route for England and exile.

It was a bitter moment indeed. It was astonishing that the Ethiopian forces had held out as long as they did. And although some troops and the irregular ‘Patriots’ continued resistance, it was not until the Allied troops invaded from Eritrea, Sudan and Somalia in 1940 that the tide really turned. 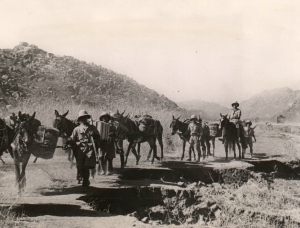 Of course, it was not just Italy that turned to colonial troops. So did the British. This undated photograph (right) is captioned: ‘With the Indian Army in Eritrea.’

“The whole Empire has been stirred by the achievement of the Indian forces in Eritrea,” Mr Winston Churchill.

To recall these events is not to apportion blame; history is not about blame. It is, rather, an attempt to recall critical moments in the lives of nations and their people.