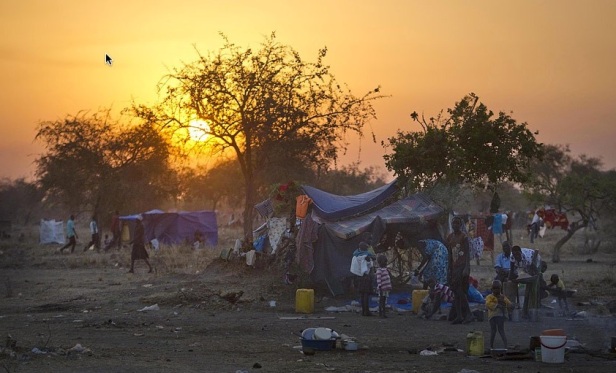 While South Sudan’s leaders continue to prevaricate, the horror of life for ordinary people is often lost.

Here, in photographs and satellite photographs, is the situation in just one corner of this vast land: Minkaman camp in Lakes state. Photographs by Geoff Pugh for the Daily Telegraph, Image by UNITAR.

According to the Red Cross some 80,000 people have sought refuge in Minkaman camp.

Many families lack food or shelter.

Most of those in the camp are Dinka who fled across the White Nile from the town of Bor, fleeing the predominantly Nuer insurgents who have captured the town.

This is how the UN satellite service, UNITAR describes the site:

“This map illustrates satellite-detected shelters and other buildings at the Minkaman IDP Site in Lakes State, South Sudan, as seen by the WorldView-2 satellite on 1 September 2014. People displaced by ongoing instability in the region of Bor have established multiple IDP camps on the west bank of the White Nile in Awerial County.

Imagery also showed an area being prepared for accommodating new shelters. As of 1 September 2014 this ground has been partially covered by shelters as well as other areas of the IDP site, and approximately 16,364 shelters and 670 infrastructure or support buildings have been detected.”