I have just bought this wonderful photograph. It must have been a moment of relief and joy for the Ethiopian people.

It shows Ethiopian fighters who had just managed to win a crushing victory over the Italian invaders.

The photograph is dated 28 May 1941. The caption reads as follows: “The motley tribal army listens to Haile Selassie message after the defeat of 30,000 Italians.” 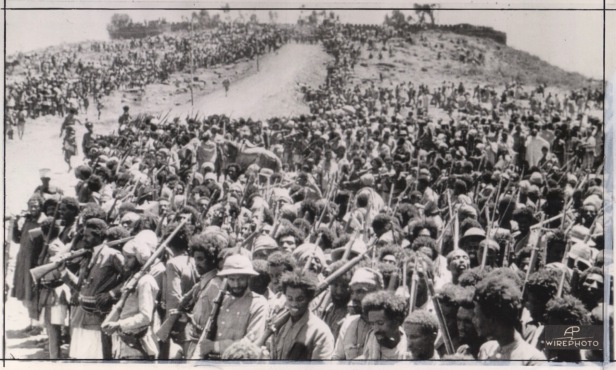 This is what Wikipedia says about these momentous events:

On 18 January 1941, Emperor Selassie crossed the border into Ethiopia near the village of Um Iddla. Two days later the Emperor joined Gideon Force, a small British-led African regular force. The standard of the Lion of Judah was raised again.

By 5 May, the Emperor and an army of Ethiopian Free Forces entered Addis Ababa.

Following the Italian defeat, the victorious forces faced a guerrilla war carried out by remnants of Italian troops and their allies that only ended in last quarter of 1943 after the formal surrender of Italy.