It is an extraordinary movement: 73 organisations spread across the world, uniting some 8 million members. Yet few have ever heard of it.

The International National Trust Organisation [INTO] brings together a unique range of organisations.

Inspired by the National Trust of England and Wales, each fights for the same basic aims: heritage, ecology and conservations, but each does it in its own unique way.

Whether it is the National Trust of Georgia, preserving the ancient heart of the capital, Tbilisi by renovating No 33 Metekhi Street….

…or Heritage New Zealand with its astonishing home – Fyffe House – built in 1844 as part of the Waiopuka whaling station, with whalebones that form the building’s foundations.

There is hardly a corner of the world that INTO don’t cover.

The Cross Cultural Foundation of Uganda has been fighting to preserve oral history of its people.

It has enthusiastic support from young people, keen to learn about their heritage.

The International National Trust Organisation was able to back their fight to preserve Uganda’s National Museum, which was almost lost to make way for a development.

In the same way, a letter from the INTO helped the Taiwan Environmental Information Association and Taiwan National Trust to save a vitally important wetland, on which a petrochemical corporation called KuoKuang planned to build refineries  in Changhua County, Taiwan.

The wetlands are well known as an extremely important habitat for Indo-Pacific humpback dolphin and many other endangered species.

Tiny St Helena (in the Atlantic between Africa and South America) with its own National Trust is restoring the island’s fragile ecosystems, while Canada’s  National Trust for Canada, is fighting to preserve the Wallingford-Back Mine: a unique, semi-natural former mine site that produced feldspar and quartz.

Each of these organisations has its own ethos, membership and structures. “But they come together as a family,” says INTO’s Secretary General, Catherine Leonard.

The ‘family’ was brought together in Bali for its seventeenth conference earlier this month: a chance to share ideas, information and inspiration.

As the chair of INTO, Fiona Reynolds put it: “We shared so many examples that exemplified the shift from looking after ‘for’ people, to looking after ‘with’ people.”

INTO is a small organisation with a global reach and astonishing aspirations. 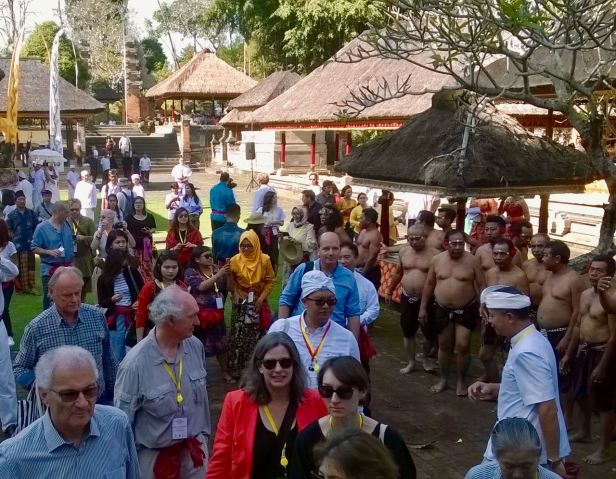