When anti-government protests erupted in Sudan at the end of last year, the response of President Omar al-Bashir came straight from the dictators’ playbook — a crackdown that led to scores of civilian deaths.

At the same time, a more insidious strategy was being developed — one that involved spreading misinformation on social media, blaming Israel for fomenting the unrest, and even carrying out public executions to make an example of “looters.”
The author of this strategy was not the Sudanese government. According to documents seen by CNN, it was drawn up by a Russian company tied to an oligarch favored by the Kremlin: Yevgeny Prigozhin.
Multiple government and military sources in Khartoum have confirmed to CNN that Bashir’s government received the proposals and began to act on them, before Bashir was deposed in a coup earlier this month. One official of the former regime said Russian advisers monitored the protests and began devising a plan to counter them with what he called “minimal but acceptable loss of life.”
While the documents do not come from official Russian agencies, they were essentially a blueprint for protecting the Kremlin’s interests in Sudan and keeping Bashir in power.
The documents seen by CNN, which include letters and internal company communications, are among several thousand obtained and investigated by the London-based Dossier Center, run by exiled Russian businessman Mikhail Khodorkovsky.
The Dossier Center receives data, documents and other information from a variety of sources, often anonymous, and shares them with journalists. Khodorkovsky ran afoul of President Vladimir Putin after alleging widespread corruption in Russia and spent several years in prison for alleged tax fraud — which he has always denied.
CNN has assessed the documents to be credible. They are also consistent with the accounts of witnesses who say Russian observers were seen at the recent protests in Sudan. 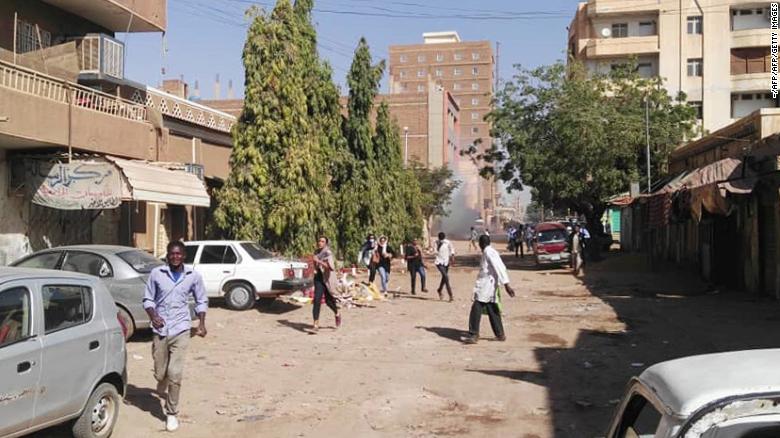 Police fired tear gas at protesters demonstrators in Khartoum in December.
Sudan has been Moscow’s template for expanding its influence in Africa and around the globe: A hybrid of private and state interests that rewards both oligarchs and the Kremlin. It’s a low-cost strategy that gives Moscow a foothold in strategic places, without the commitment of regular forces or major investment by the Russian government. Instead it uses companies that supply private contractors in return for commercial concessions.
Indeed, the documents seen by CNN originate from a St. Petersburg-based company, M-Invest, which has an office in the Sudanese capital, Khartoum. M-Invest lists as its core business the “extraction of ores and sands of precious metals.” As CNN has previously reported, the company was granted concessions for a gold mine in Sudan.
But its activities seem to have gone far beyond mining.

What the Dossier Center’s documents show

President Bashir cultivated a close relationship with the Kremlin, visiting Moscow in 2017. Russia supplied modern Su-35 fighter jets in the same year. Put simply, Russia had placed a big bet on Bashir. As protests against the regime gathered steam, that bet was at risk.
According to the documents reviewed by CNN, M-Invest drew up a plan to discredit and suppress those protests.
One document from early January, reviewed by CNN, proposes spreading claims that protesters were attacking mosques and hospitals. It also suggested creating an image of demonstrators as “enemies of Islam and traditional values” by planting LGBT flags among them. And it proposed a social media campaign claiming that “Israel supports the protesters.” 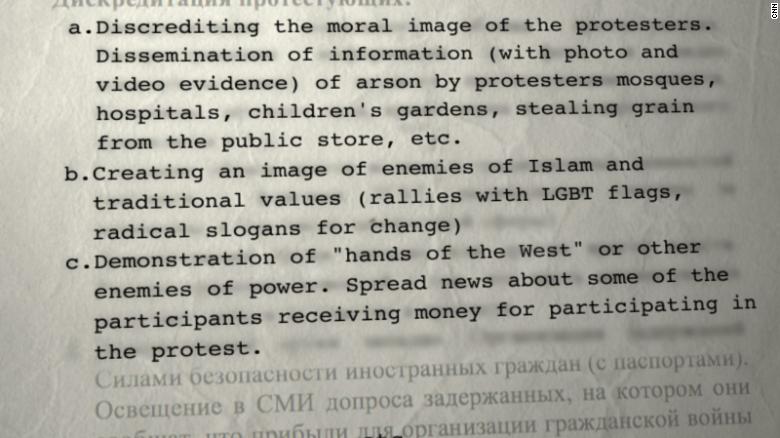 An extract from the documents details a plan to spread disinformation.
The strategy also suggested the government “simulate a dialogue with the opposition and demonstrate the openness of the government” in order to “isolate leaders of the protest and gain time.”
M-Invest proposed ways to make the government look good — through widely publicized “free distribution of bread, flour, grain, food.”
But most of its focus was on the protests. It recommended fabricating evidence “of arson by protesters against mosques, hospitals and nurseries, [and] stealing grain from the public store.”
It also suggested blaming the West for the protests and using “extensive media coverage of the interrogation of detainees, where they admit they arrived to organize civil war in Sudan.” And it even proposed “public executions of looters and other spectacular events to distract the protest-minded audience.”
CNN made multiple efforts to reach M-Invest. Its phone number in St. Petersburg did not work. An Arabic speaker answered a call to its office in Khartoum but hung up. CNN visited the address but was told the space was leased to a Russian company called Mir Gold.
Another company document recommends the arrest of protest leaders the day before demonstrations are due to take place — and spreading disinformation by saying that protesters were being paid to take part. Also recommended: Show how “security forces detained a car with weapons, foreign currency, propaganda materials operated by foreign citizens.” 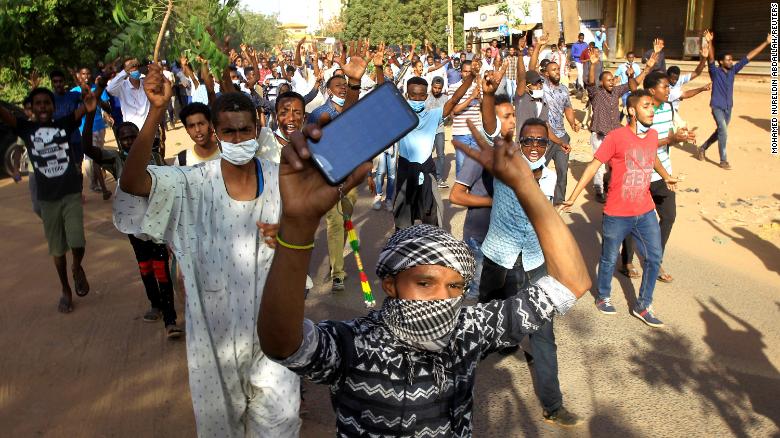 Protests erupted in Sudan last December.
M-Invest also proposed building social media teams to attack the protest movement, “starting disputes with users and voicing alternative agenda…The optimal number of accounts working in parallel — 40-50.”
In some ways the playbook is similar to that deployed by the Internet Research Agency, accused by US authorities of trying to disrupt the 2016 US election campaign.
Prigozhin — kown as “Putin’s chef” for the catering contracts he held with the Kremlin — was one of 13 Russians charged as part of the investigation into Russian election interference by US special counsel Robert Mueller. The US alleges that fictitious social media sites were set up to polarize voters with inflammatory and, in some cases, fake information. Prigozhin has denied any involvement in election meddling, and has denied any connection to the Internet Research Agency. Calls to his main company, Concord Management and Consulting, went unanswered.
The documents reviewed by CNN do not indicate that official Russian security agencies were directly involved in trying to suppress the protests in Sudan.
Foreign Ministry spokesman Maria Zakharova said at a press briefing in January: “We are informed that some employees of Russian private security firms, who have no relation to the Russian government authorities, are indeed working in Sudan. But their functions are limited to personnel training.”

Time starts to run out

Sources in Khartoum have told CNN that Bashir’s government did try to begin implementing some of M-Invest’s plans.
For example, it began detaining students from the Darfur region and accused them of trying to foment civil war — one of the ploys recommended by M-Invest. The sources say Russian advisers from a private company were placed in several ministries and the National Intelligence Service.
But it was too little, too late.
In a letter to Bashir, drafted on March 17, Prigozhin complained that the Sudanese government’s “inaction” had “provoked the intensification of the crisis.” And he added, with unknowing prescience: “The lack of active steps by the new government to overcome the crisis is likely to lead to even more serious political consequences.” 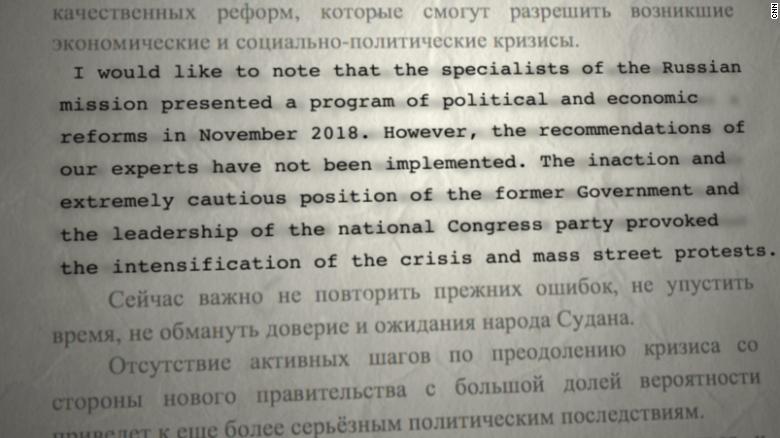 One letter expressed concern that the plan had not been implemented.
Another letter from Prigozhin, dated April 6, praised the longtime Sudanese ruler as a “wise and far-sighted leader” but urged immediate economic reforms to solve the crisis.
Five days later, Bashir was deposed.

Sudan, a resource-rich nation which has borders with seven other countries, has been shunned by the West. Its Red Sea coast was of particular interest to Moscow, because of recent moves by the United States and China to establish a military presence in the region. Moscow has been eyeing the development of a naval base at Port Sudan.
Again, M-Invest was involved. In June 2018, it drafted a letter on behalf of Sudan’s Military Industrial Corporation to push closer military links. It mentions a visit the previous month by the deputy commander of the Russian navy, Lt. Gen. Oleg Makarevich, which had discussed “the possibility of creating on the territory of the Republic of Sudan point of logistics ships of The Russian Navy.” 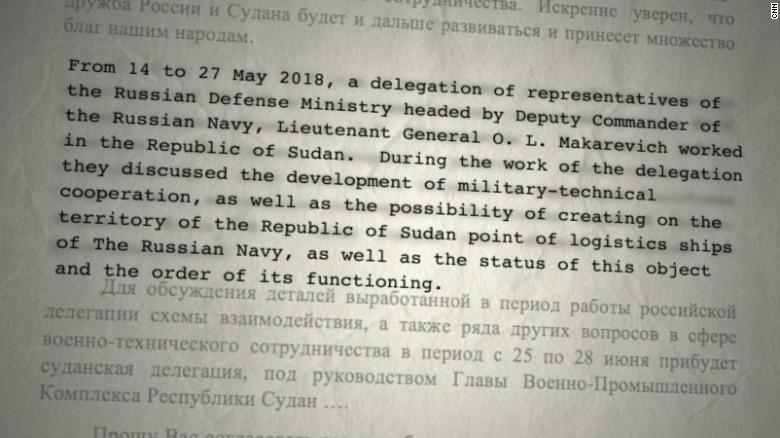 M-Invest documents indicate the importance to Russia of a port in Sudan.
The letter is addressed to Gen. Valery Gerasimov, chief of the Russian armed forces. Gerasimov is credited with promoting the use of alternative measures to military force — including political and economic levers as well as influencing public opinion through social media — to destabilize adversaries.
Yevgeny Prigozhin has been a pioneer and partner in Russia’s hybrid strategy. Not only was the Internet Research Agency connected to his company Concord Management; he was also linked to a company, Evro Polis, which secured oil exploration rights in Syria. At the time, fighters of a company called Wagner, a private military contractor were also operating in Syria. As CNN has previously reported, Wagner is led by Dmitry Utkin, who is under US sanctions for assisting pro-Russian separatists in eastern Ukraine. Utkin has long been close to Prigozhin’s inner circle
Prigozhin’s sprawling business empire is difficult to unravel. But the mining concession on behalf of M-Invest in Sudan was signed by a director named Mikhail Potepkin. A man of the same name also co-owned a company called IT-Debugger with Anna Bogacheva, one of those named in Mueller’s indictment of 13 Russians as working for the Internet Research Agency. 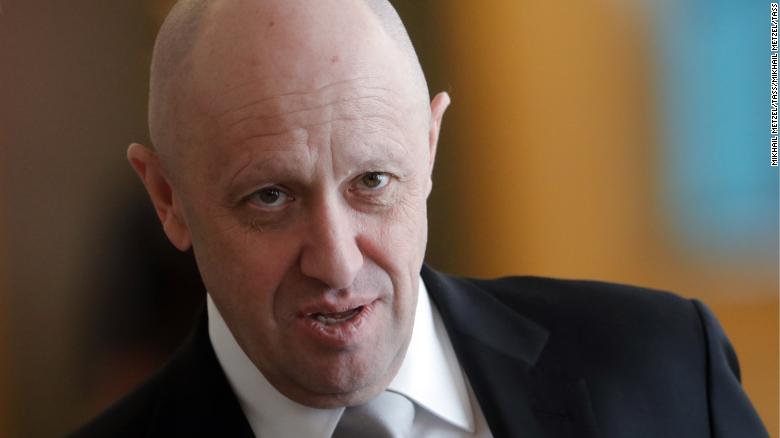 Concord Catering General Director Yevgeny Prigozhin seen after the sixth meeting of the High-Level Russian-Turkish Cooperation Council
Potepkin also identifies himself as a project manager for another company, Megaline, which is 50% owned by Prigozhin’s holding company Concord, according to company records. In a note on Megaline’s letterhead to Sudan’s minerals ministry in 2017, he says that M-Invest “will enjoy all the necessary support of the Megaline Group.”
CNN was unable to contact Potepkin.
M-Invest also signed a contract with the Russian Defense Ministry, seen by CNN, for the use of transport aircraft of the 223rd Flight. Between August 2018 and February 2019, two aircraft of the 223rd Flight made at least nine flights to Khartoum. One of those planes took Bashir on his controversial visit to Syria last December, the first by an Arab leader since the start of the Syrian uprising in 2011.
Russia has also reinforced its presence in the neighboring Central African Republic, sending convoys of supplies across the border.
Whether Sudan will remain central to Russian ambitions in Africa depends on the unfolding situation in Khartoum. Moscow will not give up easily. It has strong links with the Sudanese military, which is now in the driving seat — even if Bashir, the man described by Prigozhin as a “wise and balanced politician,” is now in a high-security prison.