Into the hell of war, again 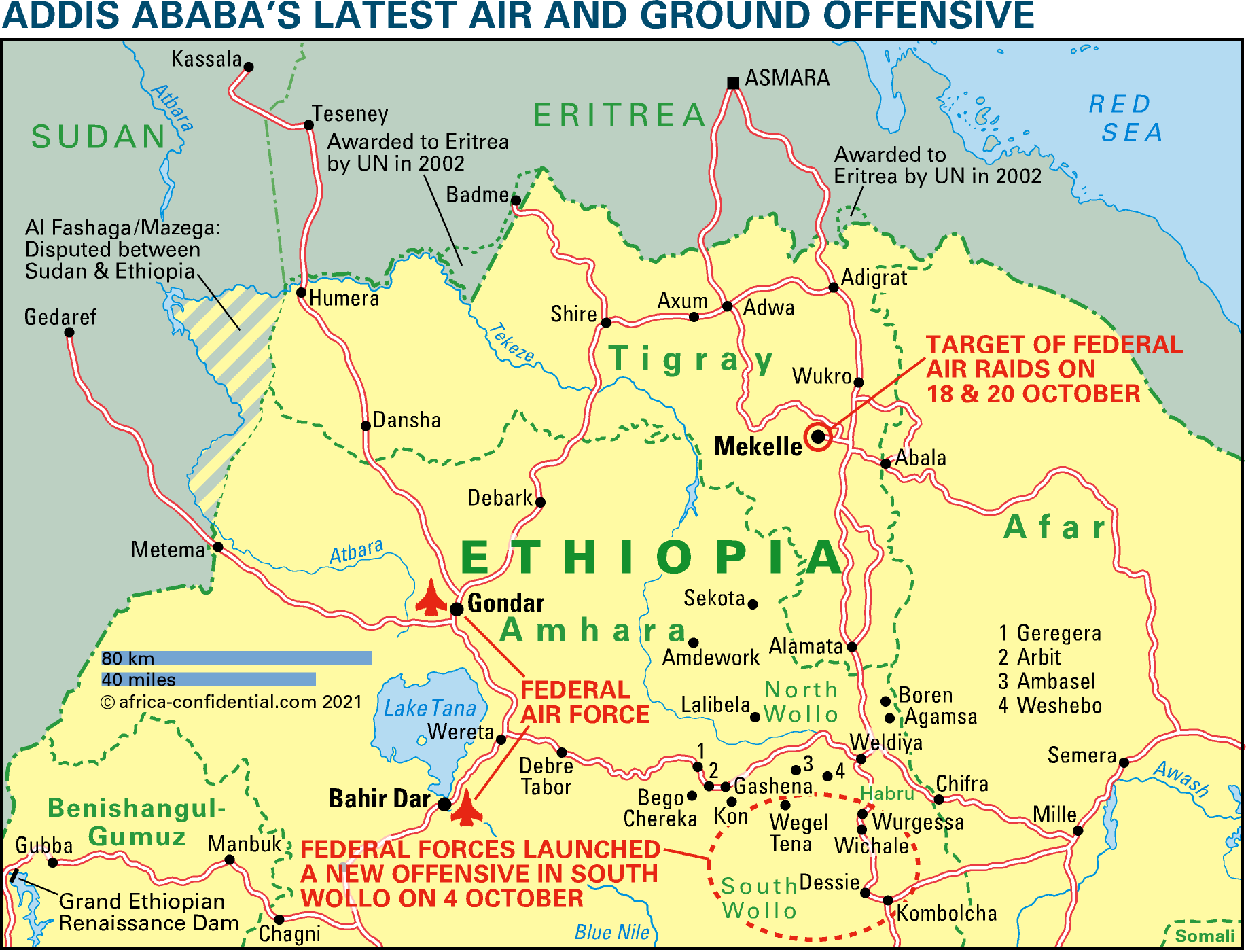 In the run-up to the first year’s anniversary of the war in Tigray, no clear victor has emerged and there is a high risk that the conflict, devastating lives and the economy, could rumble on for many more months with each side claiming periodic breakthroughs.

Hopes that Prime Minister Abiy Ahmed‘s election victory, alongside the country’s falling economic growth and investment, might prompt a serious bid to open negotiations with the Tigrayan leaders have been thwarted again.

Both sides are digging in for a more drawn-out fight. After restocking the army, recruiting and training thousands of new soldiers, and importing military supplies from overseas allies, the Ethiopian National Defence Force launched a new offensive against the Tigray Defence Forces (TDF) in the first week of October. The Tigray forces claim to have thrown back the offensive, destroyed entire divisions of ENDF soldiers and inflicted thousands of casualties on ‘human wave’ attacks, according to General Tadesse Werede Tesfay, the TDF commander, speaking on Tigray state television on 16 October. A further official statement on 18 October by Tigray spokesperson Getachew Reda claimed that the ENDF had collapsed entirely and no longer existed as an organised force.

The Tigrayans also claim that Prime Minister Abiy Ahmed has secretly contacted them for negotiations. The government in Addis Ababa has not released its account of how the offensive has fared or commented on these claims.

The TDF appears to have made critical gains in the Wollo area, eastern Amhara. If these reports are correct, the rebels will have added to the pressure on Abiy’s administration to make peace.

Attacks by the Ethiopian Air Force on TDF positions opened Abiy’s new offensive on 11 October, followed by a ground offensive. After defending strongly, Tadesse said, the TDF counter-attacked, occupying high ground to the north of Dessie, and taking the town of Chifra, which is 27 miles from the main Addis Ababa-Djibouti road, a vital transport artery, and inflicting enormous casualties.

International organisations are backing the mission of the African Union’s new special envoy to the Horn, Nigeria‘s former President Olusegun Obasanjo, who is expected to get mediation under way.

United States President Joe Biden is ready to impose sanctions on federal, Amhara, Tigray and Eritreancommanders if fighting does not cease and humanitarian aid is not allowed to reach affected populations (AC Dispatches 7/9/21, Nigeria’s Olusegun Obasanjo takes on mediating role in war as brickbats fly on both sides). The US sanctions could target military commanders, government officials and state institutions. Even the national carrier, Ethiopian Airlines – which US cable news networks accused of transporting arms – could be targeted. European governments want to keep channels open to Abiy’s new government, while urging moderation, of which there is little sign in Addis Ababa (see accompanying feature, Abiy’s war party digs in).

As the TDF fights the ENDF, the rebellious Oromo Liberation Army (OLA) has opened a new front against the federal government in the south (AC Dispatches 16/8/21, A nightmare scenario for Premier Abiy Ahmed as regional opponents coordinate against the federal government). A Tigrayan official said they have been co-ordinating their attacks with the OLA, which clashed with the government forces and Amhara militias in southern Oromia on 4 October. Affected areas include West and North Shewa, near Addis Ababa.

Abiy had been telling Western diplomats that no peace efforts could be made until his new government took office, but they believed this was only intended to buy time before the launch of the latest offensive.

On 5 October, ENDF formations approached Gashena, which lies on the main road west of the TDF-occupied city of Weldiya, but the TDF, which holds the high ground around Arbit and Bego Chereka, west of Gashena, was able to throw them back, security sources said. Gashena lies close to the world-famous rock churches of Lalibela, also controlled by the TDF. As of 17 October, fighting continued around the town, with ENDF units receiving air support, the sources added. The Tigrayans claim that they mounted devastating ambushes on the federal forces (AC Vol 62 No 18, Lies, damned lies and statistics).

Counter-attacks
Tadesse, who once headed the UN Interim Security Force for Abyei, a flashpoint of conflict between Sudan and South Sudan, said that initially federal forces cut the Weldiya-Debre Tabor road at Hamusit village, leaving TDF forces in Gashena potentially exposed, but this ‘challenging’ offensive was eventually repulsed by TDF counter-attacks. ‘We were then able to completely destroy the four divisions that were in the area,’ he said. An ENDF infantry and mechanised convoy proceeding through Wurgessa and Wichale, adjacent to each other on the north-south main road that links Weldiya to Dessie, was ambushed by the TDF and dispersed.

Tadesse said the TDF controlled Bizen, the highest mountain in the Ambassel range, where peaks reach over 3,200 metres above sea level. Around Wegel Tena, between Gashena and Wichale, federal ‘human wave’ attacks had been taking place on 16 October, and around Geregera, he said. He said the corpses of the federal soldiers lay so thick on the ground that he was reluctant to let video footage be shown. He said he had never seen such horrendous losses in his entire military career.

The TDF claimed to have taken both Wegel Tena and Wichale on 17 October, and said it was poised to capture Dessie and Kombolcha. Ten miles south-east of Dessie, Kombolcha and its major fuel depot is a strategic objective. There have been suggestions, not from the TDF, of further TDF incursions towards Dessie, and unconfirmed reports that the ENDF was withdrawing from the city.

North of Chifra, on the Amhara-Afar border, the TDF has also been in action against the ENDF, the security sources say, and controls the Agamsa and Boren hills, where the highlands descend to the flatter ground of Afar. ENDF has been firing heavy artillery and ordering drone strikes in these areas. As the fighting intensified 10 fuel trucks heading from the Afar capital of Semera to the Tigrayan capital of Mekelle via Abala were turned back.

ENDF ambitions to control vantage points between Weldiya and Gashena, such as Ambassel, Weshebo, Kon and Geregera, have been stopped but officially the command is blaming ‘unanticipated circumstances and logistical bottlenecks’, security sources said. ENDF reportedly lost 13 armoured personnel carriers and almost 1,000 troops, with another 900 missing. Horrendous as these losses have been, neither side says that it thinks a breaking point in the conflict will come any time soon. More hopeful voices in Tigray suggest that Abiy’s flair for unpredictability, as well as growing internal pressures, might prompt him to make enough political concessions to unlock the first stage of some negotiations