From targeted harassment to blackouts, Addis Ababa has tried to dilute, distract and deflect from coverage of atrocities in the Tigray war. 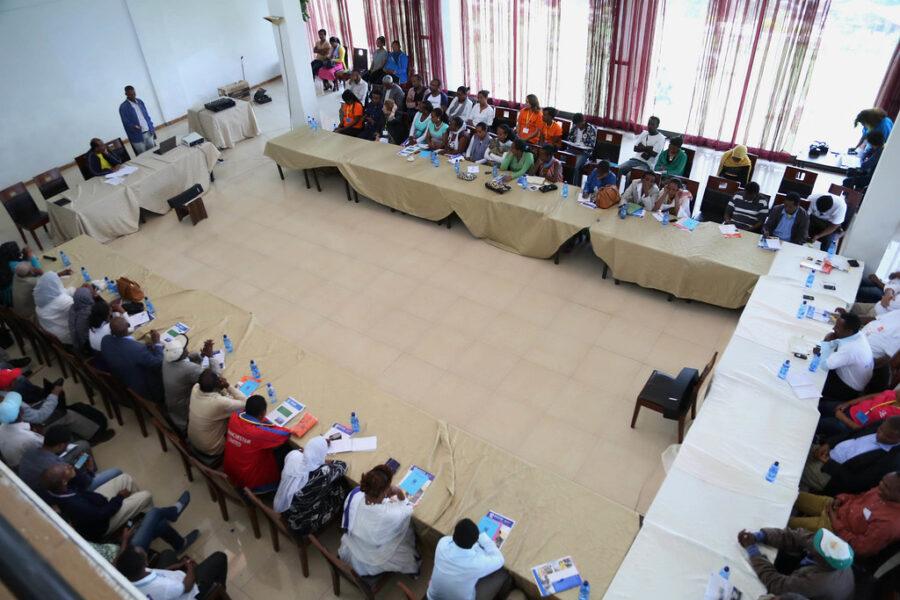 Despite near universal condemnation and concern about atrocities committed in the Tigray war, we seem no closer to its end. Since the conflict began 14 months ago, there have been reports of civilian massacres, ethnic cleansing, weaponised rape, indiscriminate drone warfare, and a humanitarian crisis amid a blockade imposed by the Ethiopian government. Away from the battlefield, Tigrayans have faced harassment, hate speech, mob killings, and mass arrests.

Many international bodies and foreign governments have denounced these violations, but they have repeatedly fallen short of the kind of action necessary to bring an end to the war or humanitarian blockade.

There are many factors inhibiting these international players – from geopolitics to their own domestic situations – but a key one that should not be under-stated is the aggressive campaign by the Ethiopian government to mute or dilute coverage of atrocities and its attempts to shape the narrative.

Here are four strategies it has employed in this regard.

At the onset of the war, on 4 November 2020, the Ethiopian government imposed a total communications blackout in Tigray, cutting the phone service and internet. These measures have continued since, allowing Addis Ababa to obfuscate or deny reports of violations or crises in the region.

In this “war of narratives”, the Ethiopian government has also actively muzzled the domestic media. It has arbitrarily imprisoned, assaulted, and even killed journalists. The Committee to Protect Journalists (CPJ) has documented many recent instances of harassment and persecution of journalists and media workers. At the end of 2021, at least 14 journalists were in prison, a figure that doesn’t take into account reporters arrested but released earlier in the year.

The government has also targeted media organisations. In July 2021, for example, fifteen employees of two media outlets were arrested en masse. In October, one of these, Awlo Media Centre, announced that “pressure and obstruction” had forced it to shut down and lay off all of its employees. Many other outlets have felt similarly targeted, including Addis Standard, one of Ethiopia’s most popular and critical sources of news, which temporarily suspended operations in July 2021 after its licence was withdrawn.

The government has engaged in similar efforts to control international coverage. It has denied reporters access to the Tigray region, harassed foreign media workers, and expelled journalists such as the New York Times’ Simon Marks. CPJ’s sub-Saharan Africa Representative Muthoki Mumo has described “disturbing efforts to control the narrative on the Tigray conflict and intolerance of critical reporting.”

Some actions have been less direct and designed to encourage self-censorship. In November 2021, for instance, the government warned in its State of Emergency proclamation that it would “cancel licenses or suspend any media outlet or journalist providing moral support to terrorist groups, directly or indirectly”.

The state has also persistently criticised the international media and made allegations of an “orchestrated” campaign of misrepresentation by reputable outlets. The government has objected to what it sees as the “character assassination” of Prime Minister Abiy Ahmed; what it regards as the overly sympathetic depiction of its opponents; and even the use of the term “Tigray forces”, which it claims is “purposely utilized to draw divides within communities”. These kinds of claims have been made repeatedly, detracting and distracting from reports of atrocities, and making life difficult for journalists. Even more concerningly, supporters of Abiy in some reputable platforms such as the Voice of America have allegedly joined in parroting the government line.

The Ethiopian government has made similar accusations against international organisations more broadly to muddy the waters and delegitimise concerns about human rights violations. It has claimed that humanitarian organisations and Western governments are actively supporting Tigrayan forces and recast the civil war as a righteous struggle between Abiy’s regime and neo-colonialists.

The government has used this narrative to justify its expulsion of humanitarian organisations and high-level UN officials. It has also used the framing of a colonial struggle to bolster domestic support for the war and to mobilise supporters in the diaspora to conduct campaigns on and off social media to intimidate and influence international organisations and governments. Tragically, this politicisation of aid has also translated into attacks on humanitarian workers, leading to at least 23 deaths already.

Finally, the government and its supporters have attempted to control the narrative by smearing influential individuals who might have the authority to raise legitimate concerns. An extraordinary example of this was the social media campaign claiming US Secretary of State, Anthony Blinken, was somehow an agent of the Tigrayan People’s Liberation Front (TPLF).

The most potent instance of this trend, however, is the almost non-stop assault on Director-General of the World Health Organisation (WHO), Tedros Adhanom Ghebreyesus. This campaign, which reveals a perfect storm of the criminalisation of Tigrayan identity and various strategies employed to censor humanitarian organisations, deserves a closer look.

From the very outset of the war, the Ethiopian regime made preposterous allegations that the head of the WHO was trying to procure arms for Tigrayan forces. Despite Tedros’ denials and unequivocal calls for peace, the campaign continued on social media, involving a range of hateful and racist tropes as well as conspiracy theories that were amplified by official government accounts. Given its attempt to position itself as the guardian of Pan-Africanism against Western imperialism, it is ironic that the Ethiopian government is responsible for harassing the first African to serve – and with considerable success – as head of the WHO.

Following the WHO’s call for humanitarian access to Tigray in January 2022, reflecting appeals from health workers across the world about the imminent collapse of the healthcare system in Tigray, the campaign against Tedros has intensified. In a bid to minimise deeply distressing reports of humanitarian crisis and the targeting of civilians and civilian infrastructure, the Ethiopian government doubled down on its harassment of the world’s most high profile Tigrayan by levying accusations of misconduct and demanding investigations. Similar to when it expelled UN officials on the basis of similarly vague allegations, the regime has not provided any meaningful evidence.

These are just a few examples of ways in which the Ethiopian government seeks to discredit critical reports and insert disinformation into the media ecosystem. This disinformation is then replicated, perpetuated, and amplified, confusing the international perception of the Tigray war and deflecting attention from ongoing humanitarian crisis and human rights violations.

When a humanitarian crisis has engulfed millions and caused such immense suffering, the gravity of allowing the strategies of an irresponsible regime to obfuscate the reality by cutting off an entire region from the world must be condemned and diligently mitigated by all actors, including those in the media.