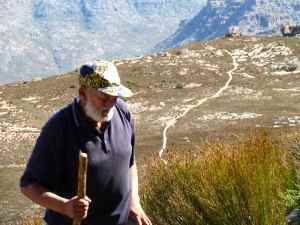 In the barren mountains North of Cape Town, hiking trails through the vast Cederberg wilderness area are offering the chance of development to one of South Africa’s most impoverished communities.  The tiny Christian mission stations of the area are home to a Coloured – or mixed race – community.  Poor during the years of apartheid, they remain poor today.

The local community has welcomed the trails that have been gradually extended to connect the villages in the area. Sitting on Tafelberg, one of the highest peaks, Julian Viljoen, who acts as a guide, says this is a good community to live in.

Born on the Cape Flats, on the outskirts of Cape Town, he decided to return to Langkloof, his father’s village. “I knew the leader of the 28’s,” he says, referring to one of the most violent of Cape Town’s gangs.

“It was just not safe to stay there, but here life is good, even if you are poor.” The Rand 200 (£14) he makes a day by guiding may not be much, but it has allowed him to remain in the village.

Some people continue to drift away to nearby towns, or travel the 250 kilometres to Cape Town in search of work. But many gradually return, disillusioned with the violence and lawlessness of urban life.  “Here we don’t lock our doors and our children can play in the street,” says Amelia Koopman, of the village of Kleinvlei.

The people of the fourteen villages live by cultivating plots around the mainly thatched houses they have built – growing maize, beans, potatoes and the rooibos (or Red Bush) tea that is indigenous to the area, on land irrigated by springs.

Men supplement their incomes by working on nearby farms. Sometimes they can earn Rand 110 a day (around £9) but they say they sometimes have to settle for as little as Rand 35 a day (less than £3). Women remain mainly at home, tending the crops and bring ing up the children.  A visit to the clinic can mean a long walk over a rough track to reach the central village of Wuppertal.

In 2006 two climbing enthusiasts from Cape Town, Denis Le Jeune and Peter Hart hit on the idea of linking the villages by hiking trails. Local people were recruited as guides. Owners of some of the best constructed homes in the villages were sounded out about taking guests.  Packs were designed for donkey’s to carry the luggage of hikers between the villages. With the support of Cape Nature, which oversees the vast 72,000 hectare wilderness area, a range of trails were devised.

Today Cederberg Heritage Trails provides six routes through the area. Money from the project has allowed residents to improve their houses putting in new floors and roof. But above all it has provided soft loans of Rand 20,000 (£1450) for solar powered heating. Over the last five years the scheme has raised Rand 926 000 (£67,000), which has been distributed among the participants.

This was vital for hikers, who need to shower after a long day in the mountains. Dr. Anthony Keen, a Heritage Trails supporter, camped at the village of Langkloof while the work was undertaken; designing the structures for the solar heaters and installing the plumbing.

Sitting outside the thatched home her husband built in Langkloof, Ann Solomon says the hot water is a real benefit, especially in the cold winter months. “There is snow on these mountains,” she says, with a laugh. “But now, at least we don’t need to boil water on the stove!”

There is plenty for hikers to see – soaring orange sandstone peaks descend through giant rock formations, carved by the wind and rain, to crystal clear pools and streams. It is an area of wild antelope, leopard and some of the Cape’s finest indigenous plants.

It’s a landscape few foreign tourists ever find and only a small proportion of South Africans have witnessed this rugged terrain either.  But above all the tours offer an opportunity to meet the people of these villages.

The villages date back to 1830, when German missionaries came to spread Christianity to the people of what was then a wild and often violent frontier.  Theobald von Wurmb and Johan Gottlieb Leipoldt established Wuppertal with seven Khoi (or Hottentot) families, but the settlement grew with the abolition of slavery in 1838.

Leipoldt was a shoemaker and he established a shoe factory to provide some income for the community. ‘Velskoen’ as the shoes are known locally, are still made at a factory in the village. Many of the older villagers still remember the Moravian pastors who came from Germany, but today the church is run by the local community.

The hiking trails have gradually gained popularity, mostly through word of mouth. “In the last year we sold hikes to 104 people,” says Peter Hart, who founded the trails. “But we wish there were more.”

Peter Hart believes Cederberg Heritage Trails can help improve the lives of these isolated communities. He says the people of the area, in the few years since the trails were opened, have learned a great deal about how to deal with tourists. “Before the project began there was virtually no knowledge of tourism in the Moravian community,” he says. “The villages have been on a sharp learning curve.”

Ann Solomon of Langkloof agrees, but she also enjoys meeting the tourists, and getting greater contact with the outside world. “The money helps, but I do it because I love meeting and providing for the visitors,” she says.