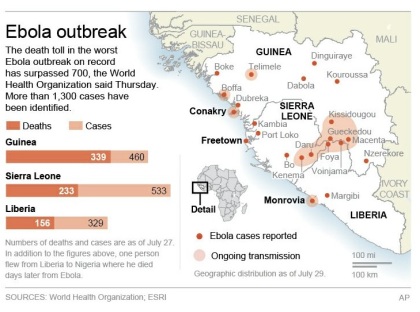 The UN’s World Health Organisation is calling a public health emergency meeting in Geneva, amid suggestions that areas infected with Ebola will be sealed off. Fear about the spread of Ebola is now gripping governments, as they struggle to cope with the West African epidemic. The World Health Organisation warns the disease is spreading faster than efforts to control it. The current death toll is over 900.

There are demands that an experimental drug which was given to American Ebola victims should be made available in Africa.

These are some of the latest stories:

Despite the evident concern, scientists continue to insist that Ebola is not a global threat. This article from Scientific America makes this case, arguing that the virus is NOT easily spread.