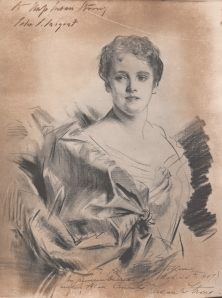 Susan Strong was an opera star of note. She performed at the Metropolitan Opera in New York between 1897 and 1901. She went on to perform in London at the start of the twentieth century, often taking Wagnerian roles.

But did she have a political role as well? I am attempting to find out more about the intriguing Ms Strong, who apparently participated in a fascinating meal that took place in the House of Commons in London in 1909. The lunch took place on 3rd August and was attended by the Labour Party leader, Keir Hardie as well as several other MPs.

They were hosting South Africans who were in London attempting to win the vote for all their countrymen – irrespective of race. Their delegation was led by the former Prime Minister of the Cape, W. P. Schreiner as well as several men who went on to found the African National Congress in 1912 – Walter Rubusana, John  Tengo Jabavu and Alfred Mangena, as well as the important Cape Town politician, Dr Abdurahman.

The menu of the meal is now in the National Library in Cape Town. It is signed by all present.

Susan Strong’s signature is right at the top.

We know that it is her’s since it bears a clear resemblance to the signature on the autographed picture above.

Here it is in close-up.

What I don’t know is why she was at the meal. Was she just entertaining the MPs? Or did she have closer links with some of them?

They were, in addition to Keir Hardie:

Did Susan Strong know any of these gentlemen? Or did she know their wives, some of whom were with them? And if so what was her relationship with them?

If anyone knows can they please contact me at this blog.

2 thoughts on “Susan Strong: star of opera, but was she politically active as well?”