This is my contribution to the excellent Guardian coverage of Eritrea.

Read more from the Inside Eritrea series 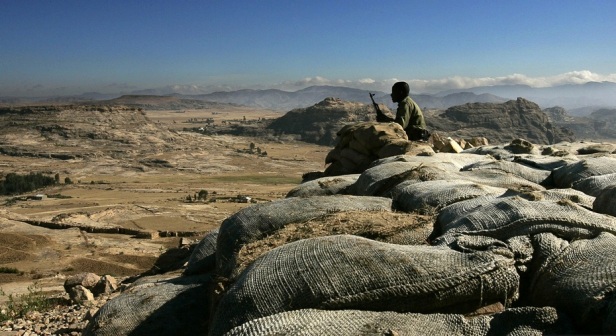 With critics split along ideological lines and many living in exile, there is no meaningful movement to oppose president’s repressive 14-year rule

The brute strength of president Isaias Afwerki’s regime has been the weakness of the Eritrean opposition. As leader of the Eritrean People’s Liberation Front, the tall, austere man led the country to freedom from Ethiopian rule in 1991 following a 30-year war, promising hope and autonomy to his war-wearied citizens.

But today, Eritrea is a one-party state, and the threat of war hangs over its people. The constitution has never been enacted, there is no independent media and the only legal party is the ruling People’s Front for Democracy and Justice (PFDJ).

All independent political activity is banned, and power is concentrated in the hands of the president and a small clique that surrounds him, a gaggle of army officers and senior party officials who serve at Afwerki’s whim.

“The country is now run without an institutional framework,” says Noel Joseph, a London based Eritrean activist. “All real power now lies in the hands of one man.”

A damning United Nations commission report published in June found that political repression was so severe it might “constitute crimes against humanity”. As commission chairperson Mike Smith put it: “Instead of a country ruled by law and good governance, the Eritrea we see today is marked by repression and fear.”

As yet, no single, charismatic leader to mobilise the dispersed opposition – forced to flee abroad following a crackdown in the early 2000s – exists, leaving them without direction, or organisation.

With the critics of the regime unable to form a coherent movement, members of the diaspora have turned to a range of civic organisations instead.

Some, like Meron Estefanos, campaign for the rights of the 5,000 Eritreans fleeing monthly from the country to be recognised by the international community as refugees. Others demonstrate against the ruling party’s seminars and fundraising activities abroad.

A movement calling itself Freedom Friday uses the internet and mobile phones to contact members of the public inside Eritrea. They encourage internal dissidents to distribute leaflets and put up posters and slogans.

All real power now lies in the hands of one man
Noel Joseph, activist

But the most significant evidence of internal resistance came in January 2013. Soldiers with tanks advanced on Asmara and took over the headquarters of the state broadcaster, EriTV. The troops, thought to be up to 200 strong, called for the release of political prisoners and the implementation of the constitution.

But the broadcast was soon interrupted as the transmission line to the studio was cut. The dissidents were hunted down by troops loyal to President Afwerki and rounded up.

There have also been recent attempts to circulate an underground newspaper: MeqaleH Forto (Echoes of Forto) was inspired by the 2013 coup, and was produced by a small team made up of writers and editors both inside the country and living in the diaspora.

Activists linked to Freedom Friday network said that while the pilot circulation was limited, they remain hopeful that it can still expand.
Historical divisions

Rifts in Eritrea’s political landscape stretch back to the 1960s, and are closely linked to the 30-year war for independence – a history that has come to define contemporary national identity.

Founded in July 1960 in Cairo, the first movement to fight colonial rule came in the form of the Eritrean Liberation Front. But in October 1966, Afwerki, then just 20 years old and a Christian from the highlands, joined their ranks and was appointed as a commander. His arrival strengthened the movement, but also triggered tensions between Muslim, conservative fighters and the Marxist-Leninist and Christian members, who rallied around the young leader.

As a result of growing disagreements, in 1972 Afwerki led a breakaway group, which became the famous Eritrean People’s Liberation Front (EPLF), cementing a major rift in the country’s politics that continues to divide the Eritrean population today.

Running parallel with the war against Ethiopia, these ideological differences soon exploded into a bloody civil war, with the two movements concentrating their efforts on eliminating each other. By late 1980, the EPLF had emerged victorious, having driven the ELF into neighbouring Sudan.

Independence soon followed, but the EPLF ensured that it remained the sole legitimate party – despite the decision to rename itself the People’s Front for Democracy and Justice (PFDJ) in February 1994.

In 1998, war erupted with Ethiopia once more, this time over control of the border village of Badme.

Throughout the dispute, Afwerki intervened personally in military decisions, overruling military commanders during critical battles. The consequences were disastrous, allowing the Ethiopians to break through the Eritrean lines. When peace was restored, a group of his closest colleagues confronted him, accusing him of mishandling the war and failing to bring democracy to the country. Now known as the G-15, these voices of dissent were promptly rounded up in September 2001, and have remained imprisoned, without trial, ever since.

The full-scale conflict, possibly the largest Africa has seen since the second world war, finally ended with a peace treaty in May 2000, but it cemented Afwerki’s brutal approach to any and all opposition.

Today, the two nations remain locked in a no-war, no-peace stalemate which the president exploits to suggest that the country faces an ongoing existential threat, requiring unquestioning loyalty to his regime. He demands absolute control over his citizens, prompting comparisons to North Korea.

EPLF dissidents have attempted to re-organise in exile, but they too have been plagued by factionalism. Numerous attempts have been made by Eritrean elders to unite these splits – often divided down the original two-party lines – but with little success.

A chart published by an Eritrean opposition website provides some indication of the complexity of these movements.

The 2013 attempted coup may point to the way ahead for the Eritrean opposition. The civic movements in exile are growing in popularity and confidence. Eritreans in the diaspora who were once wary of criticising Afwerki now openly attack his government and there are regular opposition demonstrations around the world.

There continue to be reports from inside Eritrea of sporadic opposition: clashes inside the army and of men and women venting their frustration on the streets. The Eritrean spirit of resistance that saw them through a 30-year war of independence clearly remains unbroken, but whether it can be harnessed into a movement remains to be seen.