There have been celebrations across Sierra Leone as the country is declared free of Ebola. But – says Save the Children – the lengthy closure of schools has led to a sharp rise in teenage pregnancies.

Due to blanket school closures and restricted movement around the country, there has been a significant spike in adolescent pregnancies for example, with thousands of young unaccompanied children who lost their parents or main care-givers to Ebola particularly at risk of abuse and exploitation. 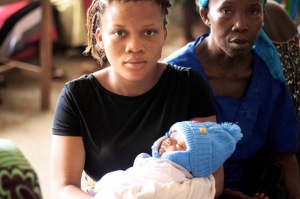 Save the Children welcomes the World Health Organisation (WHO) announcement marking the end of the Ebola outbreak in Sierra Leone, but warns that the deadly epidemic has had a devastating long-term impact on vulnerable children.
The unprecedented outbreak in West Africa was the worst in recorded history with more than 11,313 deaths in total across West Africa, including 3,955 in Sierra Leone.
“It took relentless dedication to achieve an Ebola-free Sierra Leone and it is an enormous relief for the country, but it’s also important to keep in mind the 1.8 million children who were out of school for nine months and the direct adverse impact this has had on their welfare and safety,” says Isaac Ooko, country director at Save the Children in Sierra Leone.
“Due to blanket school closures and restricted movement around the country, there has been a significant spike in adolescent pregnancies for example, with thousands of young unaccompanied children who lost their parents or main care-givers to Ebola particularly at risk of abuse and exploitation.

“Traditional extended family support networks continue to deteriorate due to lingering fear and discrimination, leaving many children trying to cope on their own, and the rapid deterioration in household and community incomes in a country still reeling from 11 years of brutal civil war has only compounded the situation, with many families unable to support young relatives with even basic food and shelter,” he adds.

Although schools have now been reopened, significant efforts are needed to help children catch up with their school curriculums and boost the near-paralysed education system. The loss of five per cent of frontline doctors and seven per cent of nurses and midwives has also severely undermined already-stretched health services.

“Children’s access to basic health care has been severely disrupted, including the implementation of routine immunisation programs against common but deadly childhood diseases such as  measles and chickenpox, life-saving malaria treatment, HIV medications, and pre and post-natal care’” says Natasha Quist, Regional Director of Save the Children in West and Central Africa.
“Of course, there is a risk that Ebola has become endemic within communities and there will always be the threat of further outbreaks that will need a rapid and effective response.
“We call on the international community to assist governments to invest in rebuilding health and education systems in Sierra Leone, Liberia and Guinea so that children and women can again access these services that are indispensable to their survival,” she adds.
Save the Children is helping to rehabilitate communities, health, and education systems, including the roll-out of a catch-up curriculum in collaboration with the Ministry of Education, Science and Technology, as well as building libraries in deprived communities, supplying books, schoolbags and pens to children, and training teachers to identify signs of trauma in their students.
The agency is also supporting the Government of Sierra Leone to ensure that measures for infection prevention and control remain in place throughout their imposed 90 days of vigilance to ensure the country is completely free from new outbreaks.
-ENDS-