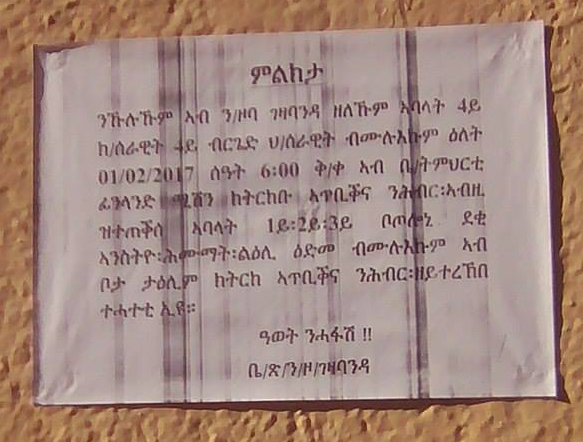 It’s that time of the year again. The Eritrean military has issued its annual demand that civilians go on refresher courses as part of their training in the reserve militia, known as the 4th division.

This force consists of people who were exempted from indefinite National Service for a variety of reasons.

Posters have gone up around Asmara.

The one above, from Geza banda, was photographed by the Freedom Friday (Arbi Harnet) resistance network. It calls for women of the 1st, 2nd and 3rd battalions, previously considered unfit for duty because of their health, to enlist in the training.

So too are retired pensioners. All are told to report to the military training centre by Monday 1st of February at 6pm.

But its just not happening.

According to reports this weekend the number of people who reported is far lower than anticipated by the authorities.

This is particularly true in the case of women. So the authorities to extended the deadline for reporting by a week, while circulating warnings that anyone who does not report will lose their government coupons for buying essential goods in government shops.

People in rural areas are particularly bitter about these annual calls since they coincide with the harvest season. Farmers busy bringing in their crops resent losing their harvest while they undertake military refresher courses.

Meanwhile, its reported by Medrek radio that Eritrean prisons are so overcrowded that they have had to implement a shift system to cope with the unprecedented numbers of prisoners.

This is particularly true of Adi Abeto military prison on the outskirts of Asmara. Prison governors have decided to send some prisoners home for three days in a week.

As a result some serve their sentence at the start of the week and others in the second half of the week.

Many observers are saddened by the fact that at the time when countries in the region are registering unprecedented economic growth the regime in Eritrea seems to focus on imprisoning an unprecedented number of its citizens.

According to sources inside Asmara, January 2017 saw a sharp rise in the number of middle level officials who are being jailed in various ministries, as well as the arrest of officers in the police and army. High ranking officials and officers have not been included.

Those arrested have been accused of passing information to opposition forces outside the country or that they are conducting an ‘unclear’ mobilisation. Police and prison officers who have also been incarcerated are accused of ‘corruption’.