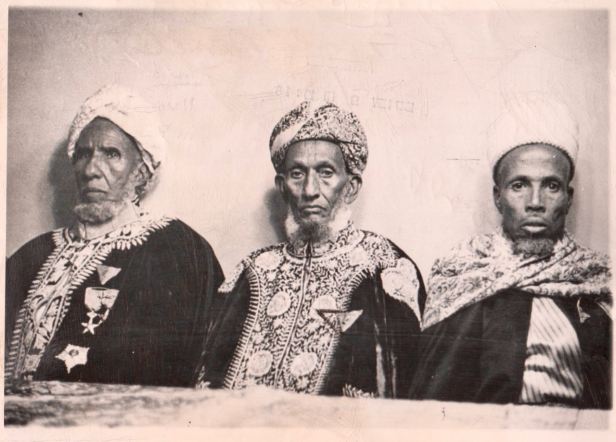 In 1947, as the United Nations considered the future of Eritrea, Muslim leaders came forward to oppose the union with Ethiopia. This photograph, taken by AP, carries the following details on its reverse.

“Moslem tribal leaders of Eritrea, the former Italian Colony in East Africa, at a Press Conference in Asmara, the capital, where Ibrahim Sultan, General Secretary of the Moslem League, outlined its wishes for the future of the colony to visiting newsmen. Nasr Pasha Abu Bakr, left, is chief of chiefs of the Assarata Tribes. He still wearing High Italian decorations, he said the Italian government had done well to him, that the League advocates immediate independence [indistinct word] U.N. Trusteeship administered by British or jointly by several powers. With Nasr Pasha are Ali Bay Mohamed, centre and Gadi Ali Omer.

See the background below

Source: The emergence of political parties in Eritrea, 1941 to 1950, by Lloyd Ellingson

In May 1941, after the Italians’ capitulation, the British immediately took over the administration of Eritrea for the duration of the war and until an international body could decide the former colony’s future. From 1941 to 1950, the political direction of Eritrea remained uncertain until the U.N. commission reached its compromise solution. Ultimately, the Ethiopian Government contravened the U.N. agreement and unilaterally annexed Eritrea in 1962, which set in motion the present struggle for independence.

The British Military Administration, acting as an interim government, attempted with moderate success to create an atmosphere in which all people of Eritrea might have the maximum voice in determining their political future. From the end of the war through the arrival of the U.N. commission in February 1950, there was a flurry of political activity. Although initially five political parties were formed, which in time became splintered and re-emerged as other parties, two main groups could be distinguished along geographical boundaries: the lowlands versus the highlands, separatist Muslims versus irredentist Christians. The historical suspicion and aloofness between Orthodox and Muslims continued to divide Eritrean loyalties. Affiliation, however, with one or another political party was not observed strictly on geographical or religious grounds. A small number of educated Orthodox saw no advantage in Eritrea’s incorporation into Ethiopia and thus formed a pocket of Christian separatists who would have undoubtedly obtained greater allegiance had not the Orthodox priesthood threatened excommunication for anyone not espousing the Unionist cause. On the other hand a small nucleus of Muslims, mostly chiefs and landed aristocracy, favored union with the government in Addis Ababa, for their feudalistic hold on the large number of Tigrai serfs (numbering three-fifths of all Muslims in Eritrea) would have been retained under Ethiopian rule.

By the end of 1946, there was widespread but unorganized anti-unionist sentiment; elections held in 1947 by the Four Power Commission showed that a small majority of all Eritreans opposed union. The anti-Unionist cause profited from Ethiopia’s intimidation and terrorist interference, which was largely counter-productive; moreover, the irredentist argument failed to convince most Muslims and some Orthodox that Eritrea would prosper under the aegis of one of Africa’s least developed countries. It seems clear that terrorism and intimidation were largely Unionist tactics and that the anti-Unionist campaign became popular not so much because of Italian contributions (which were far less than those of the Ethiopian Government to its irredentist cause) but rather because of the grass-roots nature of the Muslim movement.

Unfortunately, the future of Eritrea after two commissions and voluminous reports was decided in the international arena which failed to satisfy either side, but rather planted the seeds for future conflict.