Roselyn Akombe, an Electoral Commissioner, told the BBC she did not “feel safe enough to be able to go home” in the foreseeable future.

And she believes the Electoral Commission is “under siege” and unable to hold next week’s election.

Her letter and the BBC report is below. 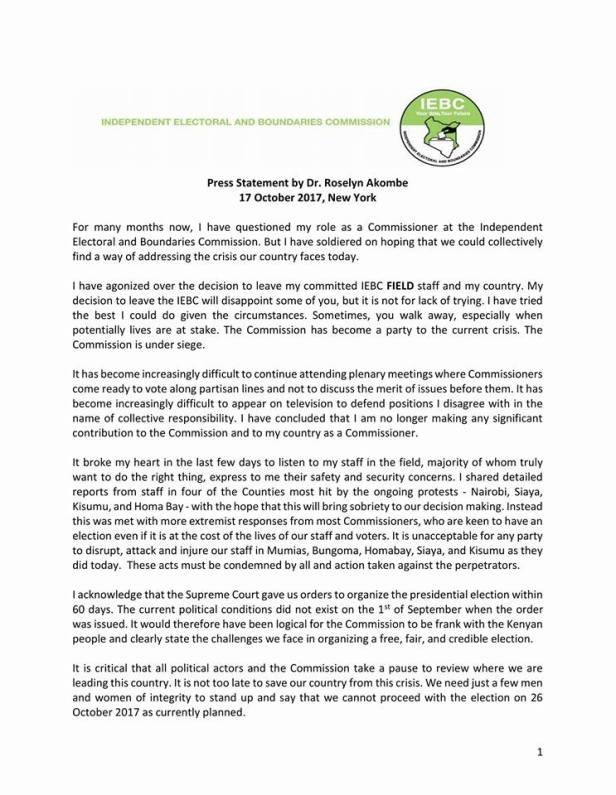 A senior member of Kenya’s electoral commission (IEBC) has resigned, saying the country is unable to hold credible elections next week.

Roselyn Akombe said the IEBC was under political “siege”, unable to reach consensus or take any decisions.

Now in the US, she told the BBC she had feared for her safety while in Kenya after receiving numerous threats.

In a statement, Ms Akombe said she had “agonised over the decision to leave the IEBC (Independent Electoral and Boundaries Commission).

“My decision to leave the IEBC will disappoint some of you, but it is not for lack of trying.

“I have tried the best I could do given the circumstances. Sometimes, you walk away, especially when potentially lives are at stake. The commission has become a party to the current crisis. The commission is under siege.

“The commission in its current state can surely not guarantee a credible election on 26 October 2017.”

And in an interview with the BBC’s Newsday programme, she said: “Would it be a credible election? Absolutely not.

“There is a very high likelihood that the mistakes that some of the presiding officers made during the last election will be repeated.”

Speaking from New York, she said IEBC members had been voting along partisan lines, without discussing different issues on merit.

Commissioners and other IEBC personnel were facing intimidation by political actors and protesters, Ms Akombe said.

She also revealed that she herself had received a number of anonymous threats, and had been put under pressure to resign.

“I have never felt the kind of fear that I felt in my own country.”

She said she did not “feel safe enough to be able to go home” in the foreseeable future.

The IEBC has so far made no public comments on the issue.

Mr Odinga, who leads the opposition – the National Super Alliance (Nasa) – said last week: “We have come to the conclusion that there is no intention on the part of the IEBC to undertake any changes to its operations and personnel.

“All indications are that the election scheduled for 26 October will be worse than the previous one.”

Mr Odinga has organised a series of protests against the IEBC in recent weeks.

Meanwhile, Mr Kenyatta says he is ready to proceed with the new vote as planned.

“We have no problem going back to elections. We are sure we will get more votes than the last time.”

The country’s electoral commission said Mr Kenyatta had won the August vote by a margin of 1.4 million votes – or 54% of the total, compared to Mr Odinga’s 45%.