Has truth become a casualty of Winnie’s rejection of accountability?

Despite her heroism, Madikizela-Mandela’s legacy must not depend on a denial of historical realities, writes Palesa Morudu 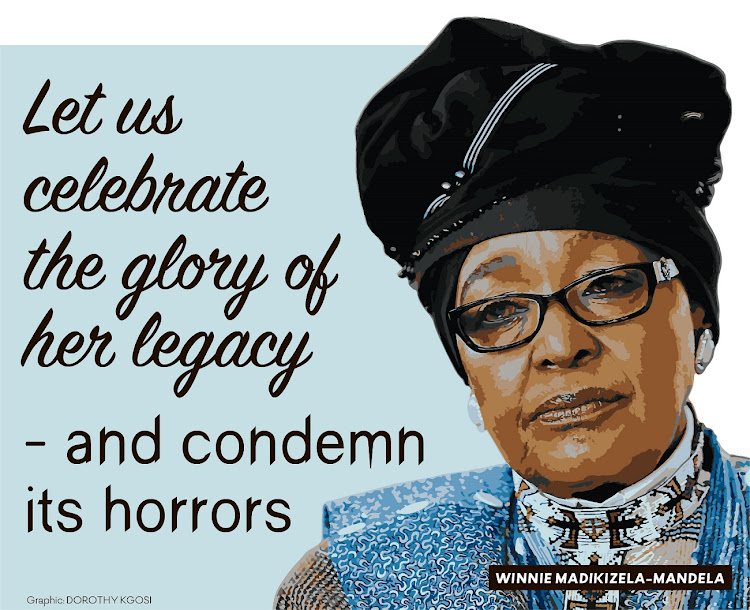 Part of my Soul Went with Him is the title of a 1985 book by the woman born Nomzamo Winifred Zanyiwe Madikizela. As SA pays tribute to one of its remarkable daughters, who will be buried on Saturday, it is fitting to ask what part of our “soul” as a nation has gone with Winnie Madikizela-Mandela.

This period of national mourning has been as South African as it gets. Adherents to the politics of adulation have been in close combat with those who avow the politics of condemnation. Some praise “Winnie” because she was a fearless fighter for justice and a feminist icon; others excoriate her because she was a violent egomaniac. Hagiography meets swart gevaar. The contest has been shrill and depressing in equal measure, especially in the hyperventilation chamber that is Twitter.

We do history a disservice if we omit the truth about the characters and events that shaped democratic SA. So, we must accept that Winnie Mandela was both a heroine and a villain.

My very first struggle song was about Winnie Mandela. As little children playing in the dusty streets of Mamelodi, we sang that Winnie was arrested and tortured because she was fighting for our land. The apartheid government had silenced nearly everyone, mostly men, by sending them to jail and forcing them into exile.

But they did not silence Winnie — a courageous and defiant black woman who stared down the brutal racist regime and declared that freedom would happen in her lifetime. She took on the mantle of “mother of the nation”, for which she paid with torture, banishment and loneliness.

In these conditions, the other Winnie was born.

When she returned to Soweto from Brandfort, she surrounded herself with a group of thugs who acted as her bodyguards. Her association with the Mandela United Football Club, and her adoption of demagogic politics (“with our boxes of matches and our necklaces we shall liberate this country”) marked her downfall.

In 1991, Madikizela-Mandela was convicted of the kidnapping of four boys in the case that included Stompie Seipei.

But to consider who Winnie had become, consider the separate case of Lolo Sono, 21, and his friend Siboniso Shabalala, 19.

In November 1988 Sono was driven away in a kombi by Winnie; Shabalala was summoned to her house the day after. The Truth and Reconciliation Commission (TRC) later found that she should accept responsibility for their disappearance. Their remains were exhumed from two paupers’ graves at Avalon Cemetery in Soweto in 2013 as a result of the work done by the Missing People’s Task Team at the National Prosecuting Authority. The two had been stabbed to death within 24 hours of their disappearance, according to post-mortem reports.

In his 1996 testimony to the TRC, Sono’s father, Nicodemus, said that just before his son disappeared he was told that “Mama Winnie” wanted to see him. He found her in a kombi with his son, who had been badly beaten.

“Mrs Mandela told me that she is taking Lolo away because they labelled him as a spy,” said the boy’s father. He pleaded with her to return his son, to no avail.

But it is Caroline Sono, Lolo’s stepmother, who best captures the tragedy of Winnie Mandela. Before the TRC she said: “I am pleading with Mrs Mandela today, in front of the whole world, that please, Mrs Mandela, give us our son back. Even if he is dead, let Mrs Mandela give us the remains of our son, so that we must bury him decently.”

These were the tears of black parents who were deeply hurt by our heroine. Their story and others should not be erased because Madikizela-Mandela has become a feminist icon. Nor is it acceptable to argue that “bad things happen in war”. To do so is nothing short of rationalising violence. During the 1980s, Soweto was under siege from the violence of apartheid and criminal gangs. Madikizela-Mandela’s protectors were at the centre of this orgy of violence. Their reign of terror made it possible for the phenomenon of “jackrolling” — a morbid “sport” in which groups of young men would kidnap girls and gang rape them — to take root. Read about it in Redi Tlhabi’s Endings and Beginnings.

It has been reported that there were police spies within her retinue. But what matters here is that Madikizela-Mandela flatly refused wise counsel from her comrades to end her association with them.

And so the die was cast. At a press conference on February 16 1989, United Democratic Front (UDF) publicity secretary Murphy Morobe, flanked by UDF president Archie Gumede and Cosatu president Elijah Barayi, made the following statement: “We are outraged at Mrs Mandela’s complicity in the recent abductions of Stompie [Seipei]. Had Stompie and his three colleagues not been abducted by Mrs Mandela’s ‘football team’, he would have been alive today. The Mass Democratic Movement hereby distances itself from Mrs Mandela and her actions.”

Morobe was no patriarchal sexist. He was speaking on behalf of a nonracial coalition of over 400 organisations of students, women, workers and activists that had been formed in 1983 to launch a final assault on apartheid. Madikizela-Mandela’s refusal to abandon her thuggish comrades posed a major risk to that project.

In reading the riot act to a heroine of the struggle — a Mandela, no less! — the UDF was calling power to account. Madikizela-Mandela had a choice: subject herself to accountability or remain “a leader of the people” without an organisation. She made her choice, as did the UDF. We all have to account for the choices we make.

The problem with portraying individuals who made a contribution as “struggle royalty” and lavishing them with such praise is that they begin to believe it. And like all royalty, they end up acting as if they are the law, and the peasants be damned.

Azhar Cachalia, the human rights lawyer who is now a judge, stressed to the TRC the importance of taking a stand against leaders who become drunk with power.

He called the UDF’s collective decision to publicly distance itself from Madikizela-Mandela’s actions “one of the most difficult decisions I have ever made. But it is also one of the proudest moments I can remember.”

This isn’t merely a historical footnote. If we can’t hold Madikizela-Mandela accountable for her legacy, what gives us the right to hold those who are currently assaulting our democracy to account? In some quarters, Jacob Zuma is considered a “struggle hero”. Enough said.

In Njabulo Ndebele’s novel The Cry of Winnie Mandela, the character Winnie says this about her relationship with the new SA: “For me, reconciliation demands my annihilation. No. You, all of you, have to reconcile not with me, but with the meaning of me. For my meaning is the endless human search for the right thing to do.

“I am your pleasure and your pain, your beauty and your ugliness. Your solution and your mistake. Your hell and your heaven.

Madikizela-Mandela will be buried tomorrow. May she rest in peace. Let us celebrate the glory of her legacy — and condemn its horrors.

• Morudu is a publisher and writer based in Cape Town.

One thought on “The most balanced assessment of Winnie Madikizela-Mandela”