The idea that anyone, ever, should use the state to organise a society by race is an abhorrent idea; it is called social engineering, the very thing AfriForum rails against 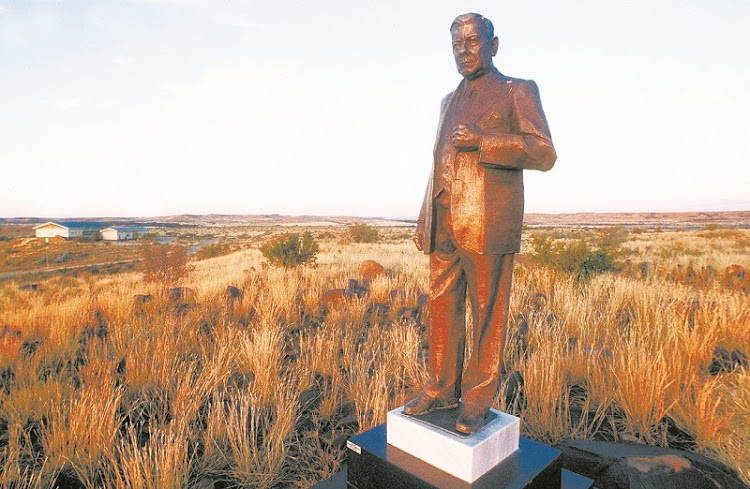 A statue of Hendrik Verwoerd – extolled as a philosopher in AfriForum’s Disrupted Land – the architect of apartheid. Picture: TISO BLACKSTAR GROUP

Thirty-six minutes into the AfriForum documentary Disrupted Land, it turns to the origins of apartheid. At 38 minutes, Liza-Mari Oberholzer, from De Afrikander Handelshuis, has the following to say about the 1950 Group Areas Act and the minister of native affairs, later to become prime minister, Hendrik Verwoerd:

“Now, many people say that Verwoerd is the architect of apartheid, but it’s a very simplistic way of looking at Verwoerd. I think Verwoerd was a philosopher. He had an ideal that he wanted to reach. And this ideal was to establish a country that was very much like Europe; the make-up of different countries with borders next to each other, but who had different cultures, different languages, and in each country, people could develop along their own lines. And Verwoerd had the same dream for SA.

As Oberholzer speaks, slow, sombre, almost romantic piano music plays in the background. When the documentary cuts away from Oberholzer, a drawing of Verwoerd is shown, smiling, next to a supposedly equally contented black man.

Subsequent to Oberholzer’s description of the ostensible motivation behind Verwoerd and apartheid, the documentary turns back to the narrator, who says:

“A process of forced dispossession and transferals was initiated in the 20th century, which is regarded by many as the most controversial act of the white minority government. This process made provision for the creation of a variety of nation states, for different tribes in SA. This was motivated by the government as a push for the improvement of living conditions and the establishment of self-determination for different peoples.

“While it is often argued by land-reform activists that these dispossessions were merely a form of government brutality and oppression, an investigation into the history of these dispossessions reveals that the true picture is much more complicated. A set of minimum requirements was developed by the state, which had to be complied with before any such programme could be initiated. These included the sufficient establishment of: water supply; sanitary facilities; housing at a certain minimum standard; medical clinics; school facilities; grocery stores; access to roads.

Apartheid was a violent, racist and involuntary assault on people’s human rights, dignity and self-worth. Everything described by AfriForum, whatever its technical truth, was carried out in that spirit

“New towns, to which black, urban groups were moved, were developed into semi-independent border towns in white areas, with the goal of allowing for black workers to commute for work. Newly established black areas and border towns presided over all the facilities provided to white areas and was largely an improvement on the areas from which they were moved.

“Black people were also compensated during these dispossessions. Land that was in private black ownership was bought and compensation was paid for alterations to the property. While it is often argued that no notice of dispossession was given to black people, an investigation again reveals that history was not that simple. As an alternative to written notices, meetings were organised with local communities and committees were established on which local stakeholders could serve in order to assist with the process.

“After the dispossession new committees were established with local stakeholders, as a measure to ensure the necessary communication channels, in order to find solutions to problems which arose as a result of the dispossession. Housing and food were provided to those affected.

“In 1960, Verwoerd initiated a referendum, which led to SA departing from the British Commonwealth, steering it to become the Republic of SA. The anti-apartheid movement, however, kept gaining ground, after the banning of various anti-apartheid movements under the Suppression of Communism Act of 1950. After a fierce power struggle between rival organisations, the ANC, backed by the Soviet Union, was able to establish itself as the de facto representative of black people, and became the impersonation of the struggle to bring the apartheid system to a fall.

“The system imploded in 1990 when president FW de Klerk revoked the banning of the ANC and other communist-aligned organisations, effectively signalling the end of apartheid. The first nonracial, national democratic election took place in 1994, leading to the advent of ANC rule in SA.”

And there, in all its glory, you have AfriForum’s description of apartheid: a totally benign and benevolent affair, without a single moral qualm, defended as a well-meaning exercise in self-determination, legal compliance, and written-up as if it were a manual for the charitable — but misunderstood.

They say you can tell the most about a person or an organisation by what makes them angry. If anything makes you angry, it should be this disgraceful piece of sanitised nonsense. It is an inexcusable piece of immoral poison.

But it is also revealing of the kinds of impulses that underpin AfriForum’s thinking and the sort of hypocrisy it is willing to indulge in order to drive its agenda.

First, it is important to say something on principle, and there are  two important points to make here. One, apartheid was a violent, racist and involuntary assault on people’s human rights, dignity and self-worth. Everything described by AfriForum, whatever its technical truth, was carried out in that spirit, and so nothing it states happened in the manner it suggests it did. The facts on this front are vast and indisputable and, frankly, to set them out would seem to suggest some kind of equivalence between the story they tell and AfriForum’s version. Which there is not.

Two, to describe apartheid in the terms AfriForum does, a description not only narrow and misleading but fundamentally tainted by omission, is deceitful. The effect of that is to achieve exactly what AfriForum bemoans: the rewriting of history. The horrors that it excludes, in the name of the illusion of bureaucratic benevolence, are too many to mention. Likewise, the horrors the very regulations it refers to so casually inflicted on so many.

Is that not exactly what the EFF stands for? It too has an ideal. It too feigns benevolence in the name of  ‘our people’. It too wishes to use the law as a technical mechanism to achieve its ideological ends. It too has race as the basis for its policy.

It is, in its totality, a description of evil so cold in its technical defence, so limited in its evidence, that it is entirely devoid of understanding — and thus humanity. It is the product of an organisation without a moral frame of reference, hence without any moral condemnation. This is an organisation one should be deeply and profoundly wary of.

One could also argue the documentary is not responsible for Oberholzer’s equally immoral description of Verwoerd; there are many people of many different ideological persuasions who appear in the documentary, but the way it is presented (the music, the graphic) and the subsequent narration, means it is an analysis AfriForum agrees with, for her apology is genuflected in the way AfriForum reduces a moral obscenity to a harmless self-help guide. And on that front, it reveals an understanding of Verwoerd and apartheid that cannot be reconciled with either truth or morality.

But, second, it is deeply revealing on a number of other fronts. And here one need only take AfriForum at its own words.

Let us assume, for the sake of argument, the analysis presented by both Oberholzer and AfriForum is correct. Is that not exactly what the EFF stands for? It too has an ideal. It too feigns benevolence in the name of  “our people”. It too wishes to use the law as a technical mechanism to achieve its ideological ends. It too has race as the basis for its policy.

What that AfriForum documentary does, by implication, is legitimise everything the EFF stands for — because it seems to argue that  if it is covered by laws and committees and some grand ideal, it is justifiable.

The point is this: taken even in AfriForum’s best, most well-glossed over, myopic reading, what Verwoerd and apartheid sought, benevolent or malevolent, was to group people by race, and involuntarily. That is anathema to any moral or ideological sense of individual freedom. The idea that anyone, ever, should use the state to organise a society by race is an abhorrent idea, whatever their best intentions (and those intentions were not benevolent). It is called social engineering — the very thing AfriForum rails against when it is committed by the EFF or the ANC. But here it is defended by omission, indulged by technical myopia, and romanticised by what appears to be nothing more than sympathy.

If you read everything in that AfriForum description in an EFF manifesto the inevitable AfriForum statement would be so replete with ideological and moral condemnation you would have a lifetime’s supply of damning adjectives. But here, not a word.

The truth is, AfriForum agrees with how the EFF goes about its business, it just doesn’t like the particular kind of society it wants to socially engineer.

AfriForum is on record, on many occasions, describing apartheid in far more realistic terms than this. So, it is not incapable of the right perspective. But that is often under cross-examination; what defines this documentary is that it is an entirely voluntary description. Without time or pressure or obligation, of its own volition and on its own terms, AfriForum had the opportunity to describe apartheid, and this is what it produced. No doubt, in response, it will again say it does not deny apartheid’s brutal nature. That is all good, well and necessary, but you feel some explanation as to its motivation is no less important than addressing the content.

AfriForum has fought some important fights. It does some excellent work opposing expropriation without compensation. It has stood firm on farm murders. It has often fought the good fight on freedom of speech. But if this is how it understands apartheid — as nothing more than a set of well-meaning technicalities that went horribly wrong — what, frankly, is the point of those fights? Becau