I recently purchased this photograph, which appears to be of Emil Cohen, important in the discovery and mapping of the geology of South Africa. Below is what is written on the reverse of the photograph. 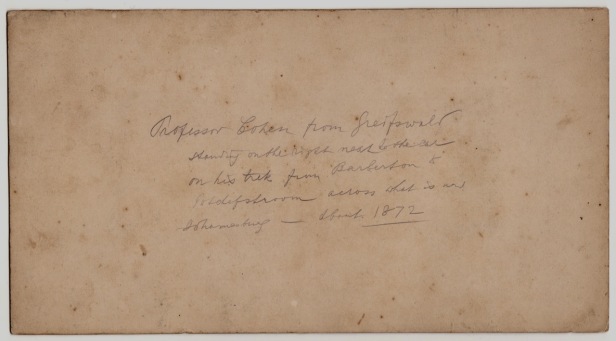 It would suggest that Professor Cohen is standing on the right “on his trek from Berberton to Potchefstreeom across what is now Johannesburg – about 1872.”

In addition to his work on diamonds and gold, he made important observations about the geology of Table Mountain, in Cape Town.

I have copied below what I have found out about him, with some of the original sources. 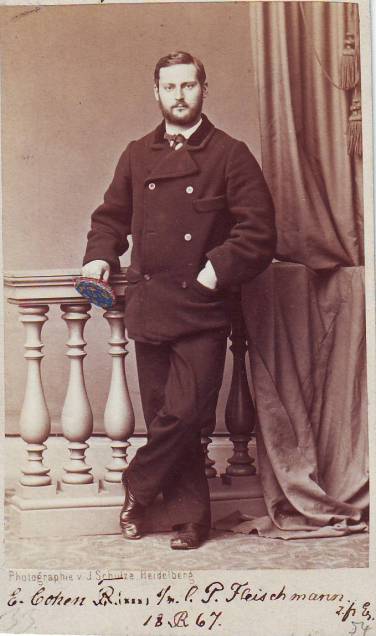 Emil W. Cohen, Danish-Jewish geologist and explorer, acquired Prussian citizenship while studying chemistry and physics at the universities of Heidelberg and Berlin, Germany, from 1863.

He was an assistant at the Mineralogical Institute at the University of Berlin from 1867 to 1869 and carried out geological surveys along the Rhine.

During 1870-1871 he served in the Franco-Prussian War as a civilian attached to the medical corps.

After the war a firm of gem-dealers in Hamburg, Lippert & Co., asked him to visit South Africa to report on the diamond fields of Griqualand West.

After studying the diamond fields he visited the Transvaal and travelled on to Mozambique, making geological observations and collecting rocks, minerals, meteorites, and some fossils.

His visit formed the basis of numerous publications. While still in South Africa he wrote six papers describing the diamond fields, as well as the gold-fields at Lydenburg and Marabastad.

These papers all appeared in the Neues Jahrbuch f�r Mineralogie in 1872-1873. He was the first to describe the geology of Dutoitspan, in 1872.

He observed the hollows filled with decomposed tuff-like rock containing diamonds and fragments of other rocks and minerals, and saw them surrounded by shales and greenstone which ended abruptly against the tuff in vertical walls. The contents of the pipes he took to be the result of tuff eruptions which carried up fragments of the crystalline, diamondiferous rocks below, through the shales and greenstone. Thus he was the first to offer a volcanic explanation for the matix rock of the diamond pipes. Later that year, having travelled and exchanged ideas with George W. Stow*, he wrote a general account of the geology of Griqualand West. Moving on to the Transvaal he visited the salt pan (Tswaing) north of Pretoria, but only years later described its geology in “Ueber eine n�rdlich von Pretoria in Granit gelegene Salzpfanne” (Mineralogische und Petrographische Mittheilungen, 1896).

As he had found no volcanic rocks in it, he thought it must have resulted from gas explosions. In June and July 1873 he travelled on foot from Lydenburg to the gold-fields on the Waterval River and back, and then on to Delagoa Bay. His description of these travels, “Erl�uterende bemerkungen zu der routenkarte einer reise von Lydenburg nach den goldfeldern und von Lydenburg nach der Delagoa Bai im �stlichen S�d-Afrika”, was published in the Jahresbericht der geographischen Gesellschaft in Hamburg in 1875, and also as a monograph of 116 pages. It included an overview of the geology of the eastern Transvaal and Lebombo Mountains.

Cohen’s observations relating to the disputed stratigraphy of the south-western Cape did not add much to existing knowledge, perhaps because the topic was of secondary importance to him. Thus in his paper, “Geognostisch-petrographische Skizzen aus S�d-Afrika, Pt. II” (Neues Jahrbuch f�r Mineralogie, 1887), he made a most curious stratigraphical suggestion which arose from his confusion of the Table Mountain quartzites with the Witteberg quartzites in the Ceres area.

Though some of his samples were given to various experts to report on, Cohen was himself one of the founders of modern petrography. His work initiated petrographical studies of South African rocks, and he was the first to use a polarising microscope to study South African samples. He also had many of his rock samples chemically analysed. He and his students ascertained the mineralogical composition of many South African rocks, so elucidating their origins. Most of the results were published in the Neues Jahrbuch der Mineralogie… over a period of more than 30 years.

For example, in 1874 he described the petrography of the granite and slate at Seapoint and Platteklip (Table Mountain), and of the Bokkeveld beds. He later also described the petrography of the Dwyka tillite and the diabase intrusions in the Karoo. Though he did not visit Lesotho, samples obtained from James Orpen enabled him to describe the pipe-amygdales of the Stormberg lavas in 1875.

He studied at the universities of Berlin and Heidelberg and from 1867 to 1872 was assistant in mineralogy in the latter university. He then spent a year and a half in South Africa, where he studied diamond and gold deposits.

He devoted the following years to mineralogy studies and to preparing works describing his African explorations. Through his Sammlung von Mikrophotographien zur Veranschaulichung der mikroskopischen Structur von Mineralien und Gesteinen (1881–83; “Collection of Microphotographs on the microscopic Structure of Minerals and Rocks”), he became a founder of modern petrography.

In 1878 he became professor of petrography at Strasbourg and Director of the Geological Survey for Alsace and Lorraine.

In 1885 he was made professor of mineralogy at the University of Greifswald. There he started work on meteorites and was one of the first mineralogists to describe the petrography of iron meteorites and their accessory minerals. He detected diamonds there, and he isolated and analyzed an iron carbide mineral. This mineral was later named Cohenite after him.

His published works include the following: