“Moscow and its private military contractors are arming some of the region’s weakest governments and backing the continent’s autocratic rulers,” said Judd Devermont, director of the Africa Program at the Center for Strategic and International Studies in Washington. “This engagement threatens to exacerbate current conflict zones.” 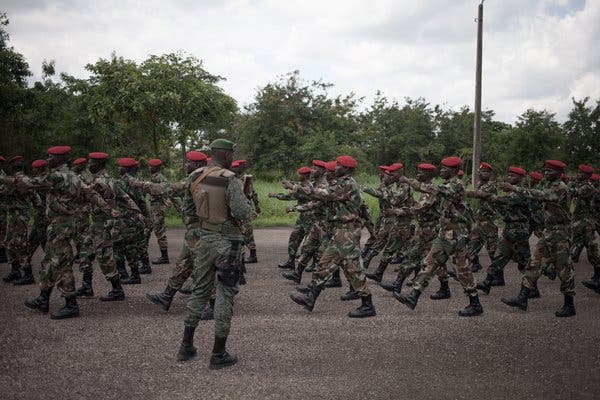 In the Central African Republic, where a Russian has been installed as the president’s national security adviser, the government is selling mining rights for gold and diamonds at a fraction of their worth to hire trainers and buy arms from Moscow. Russia is seeking to ensconce itself on NATO’s southern flank by helping a former general in Libya fight for control over his government and vast oil market.

Russia, entrenched in Africa during the Cold War’s violent East-West rivalry, largely retreated from the continent after the collapse of the Soviet Union. But in the past two years, Moscow has rekindled relations with Soviet-era clients like Mozambique and Angola, and forged new ties with other countries. President Vladimir V. Putin of Russia will host a summit meeting between Moscow and African countries later this year.

Expanding Moscow’s military sway on the continent reflects Mr. Putin’s broader vision of returning Russia to its former glory. But it also illustrates Russia’s opportunistic strategy to carve out logistical and political gains in Africa wherever and whenever it can.

“Russia is also a growing challenge and has taken a more militaristic approach in Africa,” Gen. Thomas D. Waldhauser, the head of the Pentagon’s Africa Command, told Congress in March. 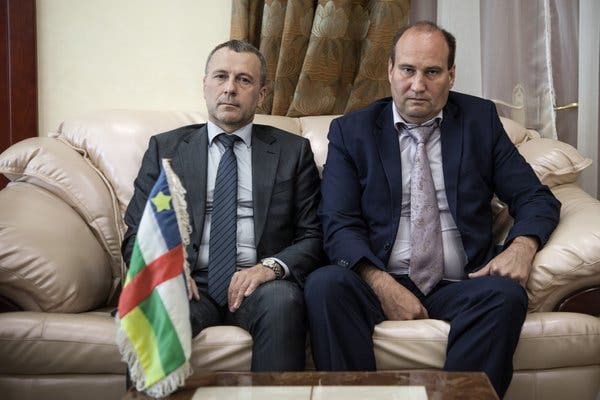 The murder of three Russian journalists by unknown assailants in the Central African Republic, a former French colony, last year drew attention to the Kremlin’s return to the continent.

The journalists were investigating the activities of the Wagner Group, a private military force founded by a former Russian intelligence officer and linked to an associate of Mr. Putin. Russia said in a statement last year that 175 instructors — believed by Pentagon officials and Western analysts to be employed by the Wagner Group — have trained more than 1,000 Central African Republic troops. The country has been mired in violence since 2012.

“Moscow and its private military contractors are arming some of the region’s weakest governments and backing the continent’s autocratic rulers,” said Judd Devermont, director of the Africa Program at the Center for Strategic and International Studies in Washington. “This engagement threatens to exacerbate current conflict zones.”

Late last year, the White House revamped its economic and security policies toward Africa — including plans to increase access to financing for projects on the continent — and administration officials have fanned out on the continent to drum up support for the plan. In March, in Luanda, Angola, John J. Sullivan, the deputy secretary of state, warned that “Russia often utilizes coercive, corrupt, and covert means to attempt to influence sovereign states, including their security and economic partnerships.”

Under the Trump administration, the Pentagon has shifted focus to confronting global threats, largely from China and Russia, and away from fighting terrorist organizations. In December, John R. Bolton, President Trump’s national security adviser, described the new strategy in Africa as a “great power” competition and counterbalance to China and Russia.

The Kremlin, Mr. Bolton said at the time, “continues to sell arms and energy in exchange for votes at the United Nations — votes that keep strongmen in power, undermine peace and security and run counter to the best interests of the African people.”

But many African nations appeared unconvinced. Some two dozen abstained in December on a motion by the United Nations General Assembly that condemned Russia’s annexation of Crimea and urged Moscow to withdraw its troops from the Ukranian peninsula.

Elected leaders in the Central African Republic have turned to Moscow to sell mining rights for gold and diamonds to buy Russian arms and to hire scores of trainers.CreditSiegfried Modola/Reuters 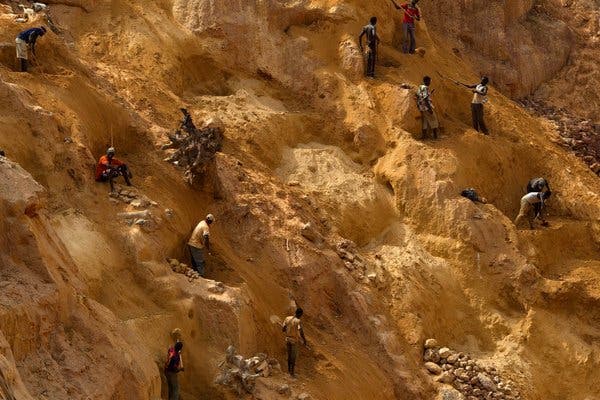 The United States military has a relatively light footprint across Africa.

About 6,000 United States troops and 1,000 Defense Department civilians or contractors work on a variety of missions throughout Africa, mainly training and conducting exercises with local armies.

Moscow cannot compete with American foreign aid or China’s sweeping investment efforts on the continent. But analysts said Russia is driven by both opportunity and necessity to advance in Africa.

Russia is seeking more strategic bases for its troops, including at Libyan ports on the Mediterranean Sea and at naval logistics centers in Eritrea and Sudan on the Red Sea, according to an analysis by the Institute for the Study of War, a research organization in Washington.

Last year, Russia signed agreements on military cooperation with Guinea, Burkina Faso, Burundi and Madagascar. Separately, Mali’s government has sought help from Moscow to combat terrorism, despite the thousands of French troops and United Nations peacekeepers who are stationed in the country.

Thirteen percent of Russia’s total arms exports in 2017 were sent to Africa, according to the Stockholm International Peace Research Institute. Russia is courting arms deals across Africa by promising timely deliveries and flexible terms — a strategy that analysts said is most successful when pitched at states that have few alternatives to develop defense agreements with other partners because they have been isolated by the United States and other countries in the West.

Nearly 80 percent of all Russian military sales across the continent are to Algeria, a longtime customer, Pentagon officials said. Tunisia, an ally of the United States, also has close intelligence, counterterrorism and energy ties to Russia. And Burkina Faso took delivery last year of Russian-made military transport helicopters and air-launched weapons.

Egypt, a staunch American ally, is also becoming a solid customer of Russian weaponry. Egypt signed a deal in late 2018 for $2 billion worth of Russian SU-35 fighter jets, the Moscow-based newspaper Kommersant reported in March.

Soldiers in Burkina Faso conducting drills. The country is among a group of sub-Saharan African nations whose leaders have appealed to Moscow for help in combating the Islamic State and Al Qaeda.CreditLaetitia Vancon for The New York Times 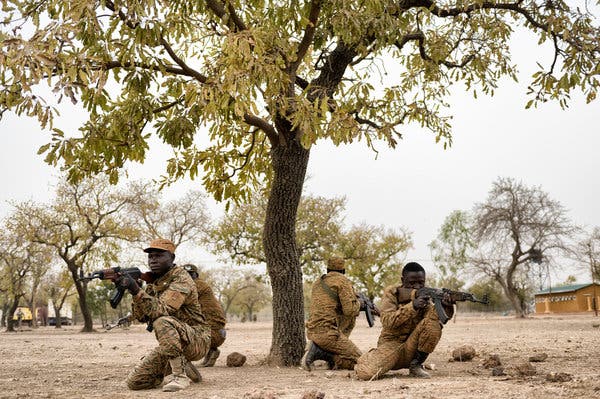 “Russia has military-technical cooperation programs with a number of African countries, and helps them equip national military forces with modern weaponry,” the Russian Embassy in Washington said in a statement. “All these undertakings are carried out in keeping with the applicable international norms and rules.”

“Russia has bolstered its influence with increased military cooperation including donations of arms, with which it has gained access to markets and mineral extraction rights,” General Waldhauser said in March in testimony before the House Armed Services Committee. “With minimal investment, Russia leverages private military contractors, such as the Wagner Group, and in return receives political and economic influence beneficial to them.”

The United States Treasury Department two years ago imposed sanctions against the mercenary company, which is also known as PMC Wagner, accusing it of recruiting and sending soldiers to fight alongside pro-Russian separatists in the Donetsk and Luhansk regions of Ukraine. Recruits from the company have also been sent to Syria, where scores, and possibly hundreds, of them died in February 2018 during a firefight with American forces.

Two weeks ago, the Russian deputy foreign minister, Mikhail Bogdanov, discussed prospects for broadening cooperation with President Faustin-Archange Touadéra of the Central African Republic. The increased aid would include “the training of national personnel, and the strengthening of security and stability in this friendly African country,” the Russian Foreign Ministry said in a statement posted on its website.

The announcement drew a cool response days later from senior French officials. “We feel very much concerned by the growing Russian influence in a country that we know well, the Central African Republic,” Florence Parly, France’s minister of armed forces, told reporters on a recent visit to Washington.

Russia is also seeking new economic markets and energy resources, in some cases rekindling relationships with countries that were in place during the Soviet era. Russia has major oil and gas interests in Algeria, Angola, Egypt, Libya, Senegal, South Africa, Uganda and Nigeria, according to the Pentagon.

“They are trying to seize the spoils,” Gen. Tony Thomas, who on Friday retired as the head of the Pentagon’s Special Operations Command, said last year at a security conference at the University of Texas at Austin. “They are very active.”