Okpabi v Shell: The era of unbridled corporate impunity drawing to a close 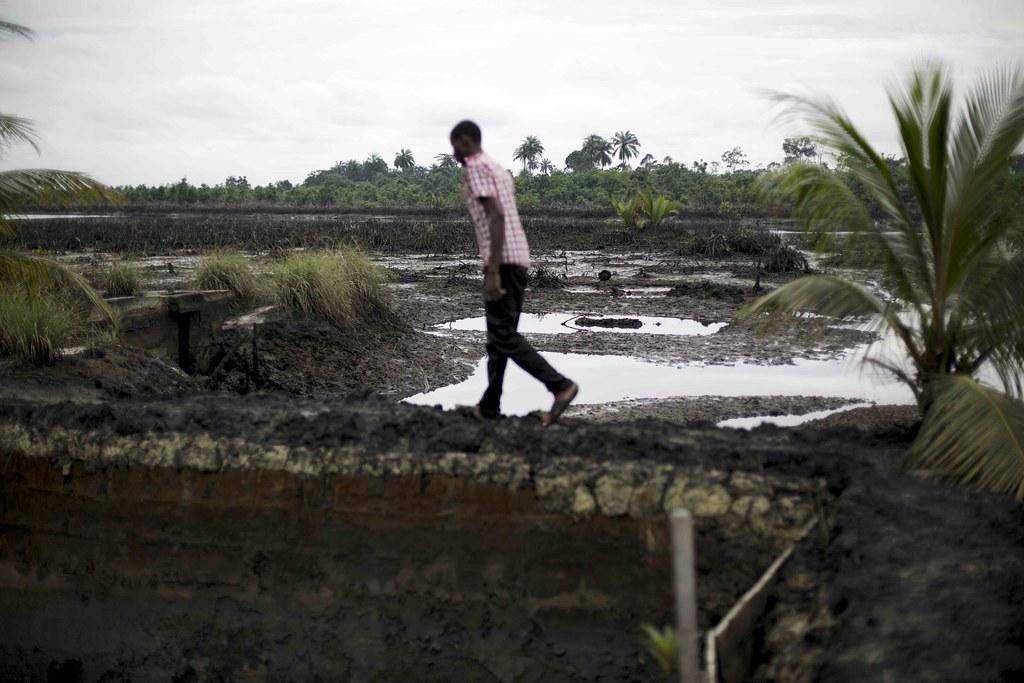 An oil spill in Ogoniland in the Niger Delta, Nigeria. Credit: Luka Tomac/Friends of the Earth International.

On 12 February 2021, the UK Supreme Court ruled that the Anglo-Dutch oil giant Shell can be sued in the English courts by two Nigerian communities which have been devastated by decades of oil pollution.

The judgment represents a watershed moment in the fight for corporate accountability. The Supreme Court has now unanimously confirmed in both Okpabi v Shell and its earlier decision in 2019 in Lungowe v Vedanta that parent companies can be held legally responsible for harms committed by their foreign subsidiaries. Reaching this point has taken years of litigation. In Okpabi, there was a five-year legal battle in which Shell argued that it could not be held legally responsible in the UK for the failings of its Nigerian subsidiary.  Parallel litigation in the Netherlands has taken over a decade, culminating in the recent decision of the Dutch Court of Appeal which found Shell liable for pollution of two Nigerian communities.

These judgments have now set out the legal framework for the foreseeable future and pave the way for more international human rights and environmental ligation in British courts against abusive corporations. For communities around the world who have been powerless to hold corporations to account, these judgments provide real hope.

Few situations exemplify the current challenge of corporate impunity as starkly as the widespread and systematic oil pollution in Nigeria. Experts estimate that the inhabitants of the Niger Delta have experienced oil spills on a par with the 1989 Exxon Valdez disaster in Alaska every year for the past 50 years, a yearly average of about 240,000 barrels.

These statistics mask a human tragedy on an extraordinary scale. The pollution is ingested by local communities and seriously impacts human health and mortality rates. A recent study by the University of St Gallen in Switzerland found that infants in the Niger Delta are twice as likely to die in their first month of life if their mothers live near an oil spill. That amounts to a scandalous 11,000 premature deaths per year.

The situation is particularly dire in Ogoniland, from where Ken Saro-Wiwa led his fight against Shell in the early-1990s. In 2011, the United Nations Environment Programme’s (UNEP) Environmental Assessment of Ogoniland reported how the Ogoni people were exposed to severe oil contamination on a daily basis, impacting their water sources, air quality, and farmland.

Public health was found to be significantly at risk. At the time the report was published signs were erected around the impacted communities which made it clear that the drinking water was unfit for human consumption and vast areas of land and waterways were unsafe. UNEP recommended that urgent steps should be taken to ensure “the largest terrestrial clean-up operation in history”. Shockingly, ten years on, the communities remain polluted, no clean-up has occurred and their residents are still drinking from poisoned wells.  The signs which once warned people of the chronic pollution are now rusty and barely visible.

Why is this human tragedy allowed to persist while Western oil majors continue to profit?  The short answer is that the weak regulatory regime gives space to avaricious corporations who fail to maintain and invest in their infrastructure or clean up their oil spills.

As a result, hundreds of polluted communities which host the infrastructure of oil majors have been left polluted, uncleaned and uncompensated for decades. Given the hopeless prospect of accessing justice for these abuses in Nigeria, these communities are increasingly seeking redress in the Global North against the parent companies who reap the rewards of their Nigerian oil operations.

The Ogale and Bille communities, whose 50,000 residents have suffered from decades of oil pollution, instructed Leigh Day in 2016 to sue Shell in London and to seek clean-up and compensation for the loss of their livelihoods. The communities argued that Shell exercised supervision, direction, and control over Shell Nigeria and that it was therefore directly liable for its subsidiaries’ failures.

In response, Shell contended that the connection between parent company and subsidiary was so remote that it acted as little more than a shareholder. It tried to persuade the courts that the parent company itself had no real involvement in Nigeria, and any evidence of guidance or direction which was transmitted to Shell Nigeria from the chain of command was from other Shell entities, not the parent company. At the same time, Shell refused to disclose any internal documentation which would explain the reality of how the parent related to its subsidiary.

Both the UK High Court and the Court of Appeal were convinced by Shell’s arguments and dismissed the communities’ case at the jurisdiction stage.  The Court of Appeal ruled that the claimants needed to show there was clear evidence of “operational control”, which unsurprisingly they were unable to do without access to internal corporate documents. It also held that global policy frameworks which flow down from parent companies, could never give rise to legal liability as a matter of principle.

The Supreme Court this February disagreed. It unanimously overturned the Court of Appeal and found that there was a good arguable case against Shell. The judges ruled that the lower courts had jumped the gun by conducting a mini-trial before disclosure and witness evidence had come into play. Further, they had failed to consider the “obvious importance” of internal documents which would shed light on the true nature of the corporate relationships.

Importantly, the Supreme Court rejected the restrictive test for liability which had been adopted by the Court of Appeal. Parent company liability does not only arise if there is a relationship of “control”; it could also arise if there is supervision, advice, and other forms of intervention which fall short of control. That could include global policy frameworks, which could be flawed and thereby give rise to harm. Significantly, the Supreme Court held that public undertakings by a parent company could also give rise to a legal duty if it fails to follow through. It would seem that the Supreme Court expects multinationals to honour their commitments.

Of course, the Niger Delta is an example of a much wider problem of endemic corporate impunity in the Global South. The Supreme Court’s judgment will have widespread ramifications for corporate accountability and will be relied upon by marginalised communities in courts around the world.

This development comes alongside important legal initiatives in the EU which will oblige corporations to conduct human rights due diligence with regard to their subsidiaries and their supply chains. The era of unbridled corporate impunity is drawing to a close. For impacted communities around the world, that is long overdue.