It seems pretty clear now that a group associated with Jacob Zuma and Ace Magashule nearly succeeded in mounting a coup against President Cyril Ramaphosa.

And it came so close.

On Wednesday evening, Defence Minister Mapisa-Nqakula also made a frank admission. She openly accepted that that the South African National Defence Force had initially ‘been caught with their pants down’, after failing to safely secure several looted malls. Now – at last – 25,000 troops have been deployed to help the police, who have been grossly outnumbered and unable to control the violence.

The intelligence services claimed they foiled much worse, but consider this:

So who is behind this mayhem? The articles below give an indication of what has been happening. 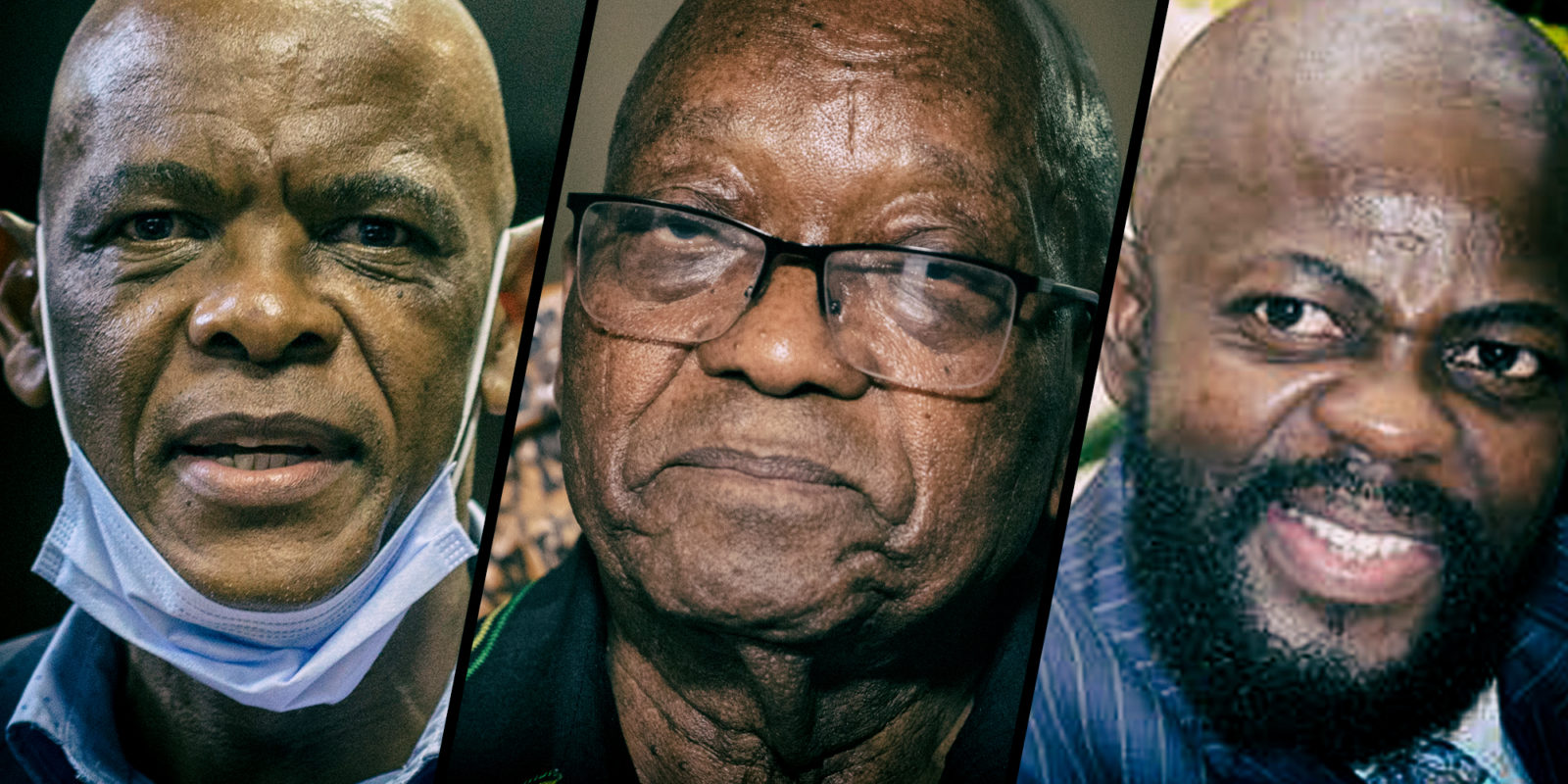 South Africa suffered an insurrection attempt this week with two provinces, KwaZulu-Natal and Gauteng, disabled and national fuel and food supply lines disrupted. It is the first such campaign organised and orchestrated on social media and shows the potency of the medium. Just over 38 million South Africans are now on the internet and 25 million of us are on social media.

More than 70 people have died, at least 1,354 people have been arrested and 12 ringleaders are being investigated for a political campaign that has spiralled out of the control of its firestarters.

The first arson “protests” at the weekend, in which 35 trucks were torched on the N3, which links Gauteng to KwaZulu-Natal and is South Africa’s food and fuel route, started the darkest week of anarchy in the country’s recent history. Information has now emerged that this was planned by intelligence operatives and other cadres loyal to Jacob Zuma. The former president is jailed at the Estcourt Correctional Centre for contempt of court and his loyalists want him out.

“These are people with experience of running operations,” said Deputy State Security Minister Zizi Kodwa at a briefing on Wednesday. News24 reported that Zuma’s leading spymaster and the former ambassador to Japan, Thulani Dlomo, is one of 12 ringleaders being investigated by the police’s Crime Intelligence and by state intelligence as being the architects of a political campaign of which they have lost control.

The SA National Defence Force contingent deployed to end the violence was on Wednesday increased to 25,000 soldiers as the government battled to bring the situation under control: overnight, 208 more incidents of looting were reported – 52 in Gauteng and 156 in KwaZulu-Natal.

While Gauteng appears to be coming under control, the looting in Durban is being live-streamed as police prove either unable or unwilling to control the mayhem, which Mayor Mxolisi Kaunda said had already cost the port city R15-billion in the week following Zuma’s jailing.

The insurrection was organised on social media once the 12 masterminds had crafted the strategy of chaos, according to senior ANC and intelligence sources who were interviewed by Daily Maverick on condition of anonymity. The chat messages in the graphic below have been filtered off social media and reportedly come from groups on WhatsApp and Telegram where the insurrectionists organised.

The common theory now is that the truck burnings were relatively easy to organise because of the long tail of renegade MK groups (organised in new movements) active in the sector. They have been campaigning against foreign truck drivers and are regarded as being behind arson attacks on truckers for at least the past three years. Police have promised to clamp down but have not substantially dealt with the killings of more than 200 truckers since 2018.

In November 2020, two truckers died and 30 trucks were set alight in anti-foreign driver campaigns allegedly by the All Truck Drivers Forum.

From the N3 campaign, the plan was to attack symbols of “White Monopoly Capital”, which explains the looting of warehouses and more than 200 malls. Specific chains were targeted.

The graphic above shows messages that were discussed at the ANC National Executive Committee meeting at the weekend and which sources in intelligence have confirmed are part of the data pile being analysed to find the ringleaders.

“We issue a stern warning to those circulating inflammatory messages on various social media platforms which are aimed at inciting violence and disregard of the law,” said the Cabinet security cluster in a statement on Tuesday. The Cabinet has asked the platform companies to track these messages and to take them down. The police cyber-crimes unit is also investigating the use of social media in incitement and as a key facet of the insurrection.

These social posters above harvested from Twitter and other platforms show the political genesis of the looting and protest campaign – and its insurrectionary characteristics. They reveal that shutdowns were initially organised in ANC colours and that the release of Zuma is still a key demand. One of the messages tells organisers not to wear ANC colours.

While the looting campaign has appeared to be organic and leaderless, an intelligence document seen by Daily Maverick says the organisers may have worked through disgruntled ward councillors and other local ANC leaders. KwaZulu-Natal is the most divided of the ANC provinces. Neither KwaZulu-Natal Premier Sihle Zikalala nor Mayor Kaunda have been able to condemn the mayhem without adding the rider that they do not agree with Zuma’s jailing and support a presidential pardon for him.

Social media accounts used by the so-called Radical Economic Transformation (RET) faction of the ANC are high-fiving the worst violence and keep appending posts demanding Zuma’s release to these. One of the social cards shows the early advertisement of a “Rampahosa must fall” march on July 30, which seems to be the ultimate outcome of the protests: to displace the current establishment of the ANC with the RET grouping. Daily Maverick was unable to confirm whether or not this march will go ahead.

This grouping has revealed its desperation with the campaign of violence that knee-capped South Africa. A reformed National Prosecuting Authority has put key players like suspended Secretary-General Ace Magashule on the defensive as he faces Free State-related corruption charges in court in August. The ANC itself has put its own reform into top gear. In the past week, it has suspended RET spokesperson Carl Niehaus, Mpumalanga leader Michael Ngrayi Ngwenya and on Wednesday suspended the Eastern Cape renegade politician, Andile Lungisa.

The RET feeder and funder networks have been disabled by the revelations at the Commission of Inquiry into State Capture – the institution whose work has turned up the heat so much that it has catalysed what some are calling an “attempted coup” this week. The insurgency or riots reveal the potency of social media as an organising tool. For a population of 59.67-million people, South Africa has 100.6 million mobile connections – people have multiple SIM cards.

There are now 38.19 million internet users in the country, according to the Ornico SA Social Media Landscape Report released in June, and 25 million of those are active social media users.

So, it’s no surprise that the protests and looting are likely to have been organised on WhatsApp (or Telegram, which is preferred by political cadres) and then amplified on Facebook and Twitter. But social media is also being used to stage a counter-rebellion of the good.

Communities are organising themselves into watch-patrols and clean-up teams to seize the upper hand from the organisers of a campaign that has halted the optimistic momentum of South Africa’s vaccine drive and which threatens the green shoots of economic recovery from the devastating Covid-19 campaign. The controversial former head of the State Security Agency’s (SSA) rogue special operations unit, Thulani Dlomo, has been identified as a prime suspect being investigated for fomenting violent unrest in KwaZulu-Natal following the arrest of former president Jacob Zuma.

News24 can reveal, from information confirmed by three independent and highly placed sources, that intelligence officials told the police Dlomo was a key person of interest in instigating the unrest that has rocked South Africa, led to the death of at least 45 citizens and destroyed businesses and jobs worth hundreds of millions of rands.

The former spook and ambassador to Japan is known to be fiercely loyal to Zuma and is said to be at the centre of orchestrating pro-Zuma unrest that has descended into violent looting across KwaZulu-Natal and Gauteng. In January, the Zondo Commission heard that Dlomo’s unit effectively operated as Zuma’s private militia, “was a law unto itself and directly served the political interests of the executive”.

This is Ramaphosa’s crisis to waste

When Janusz Waluś  shot and killed Chris Hani in the driveway of his Dawn Park home in Boksburg on the Easter weekend in 1992, the country very nearly descended into a full-blown civil war.

Tensions were already running high. The National Party was reluctant to pick an election date, and most South Africans were losing patience with the drawn-out nature of the Kempton Park negotiations.

As president, FW de Klerk might have addressed the nation.

Instead, it was agreed that ANC president Nelson Mandela would make a statement. This was a strategy not without risk: De Klerk had no idea what his rival would say, while Mandela also took a risk that he might be seen as betraying Hani’s memory by appealing for calm. It was a seminal moment.

“Tonight I am reaching out to every single South African, black and white, from the very depths of my being. A white man, full of prejudice and hate, came to our country and committed a deed so foul that our whole nation now teeters on the brink of disaster. A white woman, of Afrikaner origin, risked her life so that we may know, and bring to justice, this assassin,” said Mandela.

Calm did not return immediately. It took weeks before tensions eased, but talks resumed and an election date was set.

At the time, SA was far from calm.

As a young reporter on the streets of Katlehong, Vosloorus and Thokoza, I regularly witnessed the bloody violence that characterised the tensions between warring ANC and IFP supporters, the latter aided and abetted by police.

Added to the mix was right-wing agitation that came in the form of a ludicrous AWB “invasion” of Bophuthatswana, and a series of bomb attacks — including one at the then Jan Smuts airport, another at the Small Street Mall which left a five-foot-deep crater in the tarmac, and another at a taxi-rank on the East Rand which left body parts strewn over a wide area.

In times of crisis, great oratory is a useful tool.

Those that rise to political prominence have always understood this.

Of course, not all leaders are great orators and certainly not all great orators are leaders. Mandela was a rare mix of both. Right now, it’s not clear that Ramaphosa is either.

This crisis provides him with an opportunity to show his mettle.

Ramaphosa’s cautious approach to managing internal divisions within the ANC has been frustrating to watch. Events of the past week go some way to explaining his apparent reluctance to tackle opposing factions within his party head-on.

A challenge to the Zuma kleptocracy

Now the deep, dark and dangerous divides in the party have spilled out onto the streets, illustrating the lengths Jacob Zuma’s supporters will go to, to claw back influence.

What is playing out on the streets is a manifestation of the profligacy of the Zuma era: his supporters are treating his jailing as a declaration of war designed to prevent them continuing their grand self-enrichment project.

Zuma’s supporters have shown they will stop at nothing to achieve their goal — and they certainly don’t care who gets hurt in the process.

Ramaphosa, already wearied by the relentlessness of the Covid-19 pandemic, needs to act beyond just quelling the looting and criminal activity afflicting parts of KwaZulu-Natal and Gauteng. In particular, he needs to finally stop tiptoeing through the ANC minefield.

Ramaphosa has spent more than three years building his internal support — but now it’s time for him to make his allies choose between progress and chaos. This is his crisis to waste.

One thought on “The South African coup that nearly succeeded”