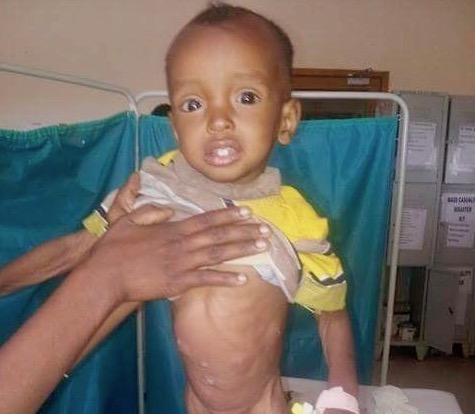 Readers of this blog will know that I have previously published evidence of the hardship brought by el Nino.

It has inflicted terrible hardship; hardship which the Eritrean government has refused to admit.

Now further evidence has emerged, smuggled out of Eritrea and from an aid agency.

There are further reports of the impact of drought from various parts of Eritrea.

The sub-zone of Mai Mine in Southern region is reported to be very badly impacted.

This is around the administrative center of Mendefera (formerly known as Adi Ugri).

The photograph smuggled out by members of the Freedom Friday network (Arbi Harnet) is from a feeding centre or clinic in Mai Mine.

It shows a child suffering from a severe form of malnutrition. The child was also suffering from severe anaemia and was on the verge of death when he arrived at the clinic.

But these are not the only regions in which hardship is reported.

There is said to be an extreme shortage of food in parts of Dankalia.

An aid agency worker who recently visited the far East of Sudan, reports 20 – 30 people coming across from Eritrea daily.

This area, near the Sudanese refugee camp of Shagarab camp, is notoriously hot and dry, but even populations used to living in tough conditions say they are running out of food and water across the border.

Eritreans arriving in Sudan complain that their government is refusing to admit the hardships they face.

The authorities routinely deny that the drought has resulted in extreme difficulties, with crops failing and animals dying.

They ask: “why is the Eritrean government trying to hide this crisis?”