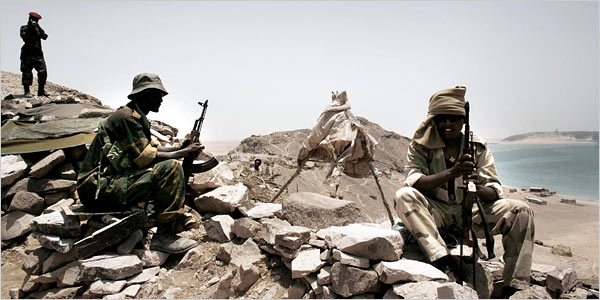 Eritrea is well known for the 30 year war of independence it fought against Ethiopia. It is also remembered for the tragic two-year border war of 1998 – 2000, once more with Ethiopia. But these are only the tip of the iceberg.

For a young country (only formally independent in 1993) Eritrea has been involved in an extraordinary number of conflicts. Here I will focus on some of the lesser know, before outlining those that are better understood.

What is notable about both of these wars is that they were undertaken in alliance with the newly installed Ethiopian government.

It is often overlooked that after the fall of Asmara and Addis Ababa in 1991 to the rebel movements of Eritrea and Tigray – they worked closely together. Relations between newly independent Eritrea and the new government in Ethiopia were very good indeed.

The border war of 1998 negated this relationship, but this should not obscure the fact that Eritreans and Ethiopians (or, more accurately, Tigrayans and Oromo) had fought alongside each other to oust the Mengistu regime. The alliance held in the first few years after 1991. Indeed, an Eritrean battalion remained in Addis Ababa until at least 1995, guaranteeing the security of the government of President/Prime Minister Meles Zenawi.

1. The war in Sudan. This conflict is admirably summarised in the Royal African Society’s publication, African Arguments. Two articles by Ahmed Hassan, which can be found  here and here, show how Eritrea and Ethiopia worked with Sudanese opposition movements to try to outs the Sudanese government.  As Ahmed Hassan argues, it was an alliance Eritrea and Ethiopia forged with the Sudan Alliance Forces (SAF) that did the fighting. They were backed by Ugandan troops and American money, in the form of CIA subventions.

The allies were attempting to outs the National Islamic Front (NIF) that had come to power in Khartoum in June 1989. Eritrea broke relations with Sudan in December 1994, and Sudanese rebels of the SPLA/M moved to Asmara officially in 1995 and were based in the building that had served as the Sudanese Embassy just few months previously. Tension between Eritrea and Sudan stemmed primarily from traded accusations that both Sudan and Eritrea were supporting opposition groups of the other country, and Islamist expansionism in Khartoum.

As Ahmed Hassan argues: “Most importantly, Sudan was viewed at that time by Eritrea, Ethiopia, and the U.S. as a destabilizing factor within the region posing serious threats with its adoption of a political Islamic agenda and the subsequent support to Islamic militants from Eritrea, Ethiopia, and Somalia. That period also marked honeymoon of the relations between the U.S. and the ‘new breed’ of African leaders represented by Isseyas Afewerki, Meles Zenawi and Yoweri Museveni.” Hence the American support.

The war came close to succeeding – at one time threatening Khartoum’s power supply from the Nile. But in the end the Sudanese opposition fragmented. Internal conflicts and a lack of success on the battlefield led to deep divisions. As Ahmed Hassan suggests: “By early 1998, SAF reached its limit as an effective movement due to the limited capacity and narrow agenda of its leadership. Serious internal conflicts between the military and the civilian components of the movement started to surface.”

Then – out of the blue (apparently) – the May 1998 border war erupted between Eritrea and Ethiopia. Both nations moved to mend fences with the Khartoum government and their support for Sudanese rebel movements melted away. For Eritrea the war with Sudan was over: the border war with Ethiopia had just begun.

2. The war in Congo. Again, this was a joint Eritrean-Ethiopian operation, although it was Eritrea that did most of the fighting. It is a strange story, with many twists and turns.

This operation had its origins in 1994 and the Rwandan genocide. When the Hutu genocidaires established bases in the Congo to try to fight their way back into Rwanda, the newly installed Rwandan government of Paul Kagame decided to act. They looked around for a Congolese player whom they might use and came across Laurent Kabila. Until then Kabila had been a small-time hotel owner who dabbled in Congolese politics, and had once met the Cuban revolutionary Che Guevara.

The Rwandans and Kabila’s Congolese set out to overthrow the Mobutu government on the other side of the continent. This is how the BBC described these events: ”

In October 1996, Kabila’s “Alliance of Democratic Forces for the Liberation of Congo-Zaire” launched an offensive against the Zairean Government. With the help of ethnic Tutsis and the Rwandan army, Kabila’s alliance took control of over half the country – larger in size than western Europe – within seven months. Laurent Kabila declared himself President of the Democratic Republic of Congo on 17 May 1997.”

What is seldom reported is that Eritrean forces – a battalion strong – accompanied the Rwandans and Kabila’s rebel army. Ugandan and Burundian forces were also involved. This alliance mirrored the alliance in Sudan.

As the journalist Patrick French observed: “Rwanda’s designs on eastern Congo were further helped by the Clinton administration’s interest in promoting a group of men it called the New African Leaders, including the heads of state of Ethiopia, Eritrea, Uganda, and Rwanda. As Clinton officials saw it, these New Leaders were sympathetic and businesslike, drawn together by such desirable goals as overthrowing Mobutu, by antagonism toward the Islamist government of Sudan, which shares a border with northeast Congo, and by talk of rethinking Africa’s hitherto sacrosanct borders, as a means of creating more viable states.”

The Eritrean forces fought valiantly and many paid with their lives, arriving in Kinshasa exhausted and ill. They had to be evacuated home. But they also had been of considerable economic benefit to Eritrea. Where they took control of areas of the Congo they set about extracting what benefits they could from its rich mineral reserves. There are stories of gold and other minerals being shipped out, to help boost the Eritrean economy.

Laurent Kabila owed his presidency – at least in part – to the Eritrean-Ethiopian mission, which explains why he attempted to intervene in June 1998 to halt the border war that broke out between his two former allies.