Getting rid of the UN’s chief envoy when you are a country as dependent on international goodwill as Somalia is, is an extraordinary act. To kick out as distinguished a diplomat as Nicholas Haysom makes this decision even more remarkable.

The reason for his expulsion is apparently Haysom’s clash with the Somali government. VOA reports that the authorities released this statement to its own media. “The decision came after the highest U.N. diplomat in Somalia violated the agency’s standards and the international diplomatic norms by intervening the national sovereignty of Somalia.”

So what had Haysom done which so infuriated the Somalis?

This is how VOA explained the decision:

On Monday, the U.N. ambassador urged the Somali government to safeguard human rights. In a letter, Haysom urged Somali authorities to “exercise its authority in conformance with the law and provide explanation about the atrocities committed in Baidoa last month and the detention of Mukhtar Robow.”

Robow, a former al-Shabab leader, was arrest by the Somali government security forces last month. He also was excluded from elections in the South West Region of Somalia.

During his arrest, and the protests that followed, allegations came up that U.N.-supported regional police forces were involved in violence that left 15 civilians dead. 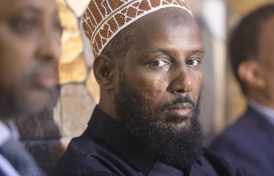 Robow, once a senior member of Al-Shabaab, and its spokesman, left the rebel group in 2013. But when he decided to stand for election in Baidowa in the South-West of the country, the authorities discovered he was widely popular.

The government “has just woken up to the fact ex-militant Robow has a commanding lead and is likely to be the next president of [South West State] in a free context,” said Rashid Abdi, an expert on Somalia at the International Crisis Group.

By raising these issues Haysom trod on Somali government corns. The government relies on the African Union force for its survival. It cannot afford to upset its Ethiopian allies. Hence its decision to declare the UN envoy ‘persona non-grata.’

It is worth recognising Haysom’s background. ‘Fink’ Haysom (as he was known to his friends) was Nelson Mandela’s chief legal adviser. He is probably the most illustrious South African international lawyer, with an astonishing track record as a diplomat.

He was Special Representative of the UN Secretary-General for Afghanistan (2012–2016); Director for Political, Peacekeeping and Humanitarian Affairs in the Executive Office of the Secretary-General (2007–2012); Head of the Office of Constitutional Support in the United Nations Assistance Mission for Iraq (UNAMI) (2005–2007).

Haysom is also an accomplished playright: recipient of the South Africa Playwright of the Year award (1987). The story is based on an actual event that took place in Cape Town in 1937.