I have just been to an event at the UK Archives on the Treaties that ended World War One – 100 years ago.

The Archive has brought together all the Treaties that were involved in the Conflict, including this one, the original Treaty of London (signed 19 April 1839) that created Belgium and whose violation sparked off Britain’s war with Germany. 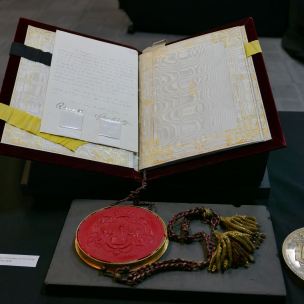 Treaty of London
When Britain declared war on Germany on 4 August 1914, German Chancellor Theobald von Berthmann-Hollweg expressed his surprise at seeing the British going to war over a ‘scrap of paper’.
Some scrap of paper! It’s magnificent!