Signed on 28 June 1919, the Treaty of Versailles ended the war between Germany and the Allied Powers. Between the War Guilt Clause and the Financial Clauses, Article 246 stated:

‘Within six months from the coming into force of the present Treaty […], Germany will hand over to His Britannic Majesty’s Government the skull of Sultan Mkwawa which was removed from the Protectorate of British East Africa and taken to Germany.’ (FO 93/36/76)

This marked the start of a long quest for the skull. 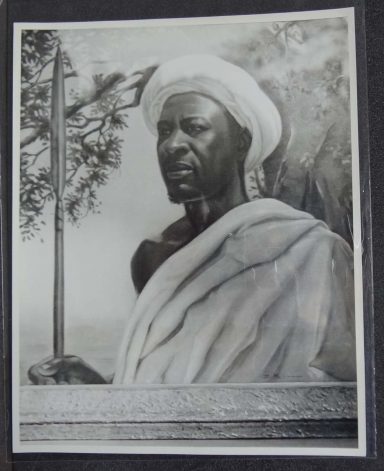 Mkwawa had been the chief of the Hehe tribe in German East Africa (now Tanzania), and opposed German rule. In 1895, he declared that ‘rather than submit to German rule he would fight them to the utmost limit, and rather than surrender he would die by his own gun’.

In 1898, a bounty was placed on his head, which led to a manhunt. On 19 July, Sergeant Major Merkl and his party closed in on Mkwawa. Merkl reported that they heard a shot and hurried towards the camp, where they found ‘two natives lying down by the camp fire’. One of them was identified as Mkwawa himself. Merkl wrote:

‘I thought they were asleep, halted at about thirty yards and then fired. The bodies did not move. On reaching the spot, we found both men dead and cold (…). I ordered my askari to cut off Mkwawa’s head to take along to camp.’ (CO 822/770)

On the following day, Merkl returned to camp in Iringa, where Captain Tom Prince (later von Prince) took charge of the head and ‘had it dried’. Mkwawa became a local hero, symbol of the struggle against colonial powers.

On 14 November 1918, Sir Horace Byatt, the Administrator of the former German East Africa, wrote to the Colonial Office. He suggested that, as the Hehe tribe had been helpful during the war, Britain should endeavour to recover Mkwawa’s skull from Germany. It would have a good local effect, and ‘it would also afford tangible proof in the eyes of the natives that German power [had] been completely broken’ (FO 608/215). 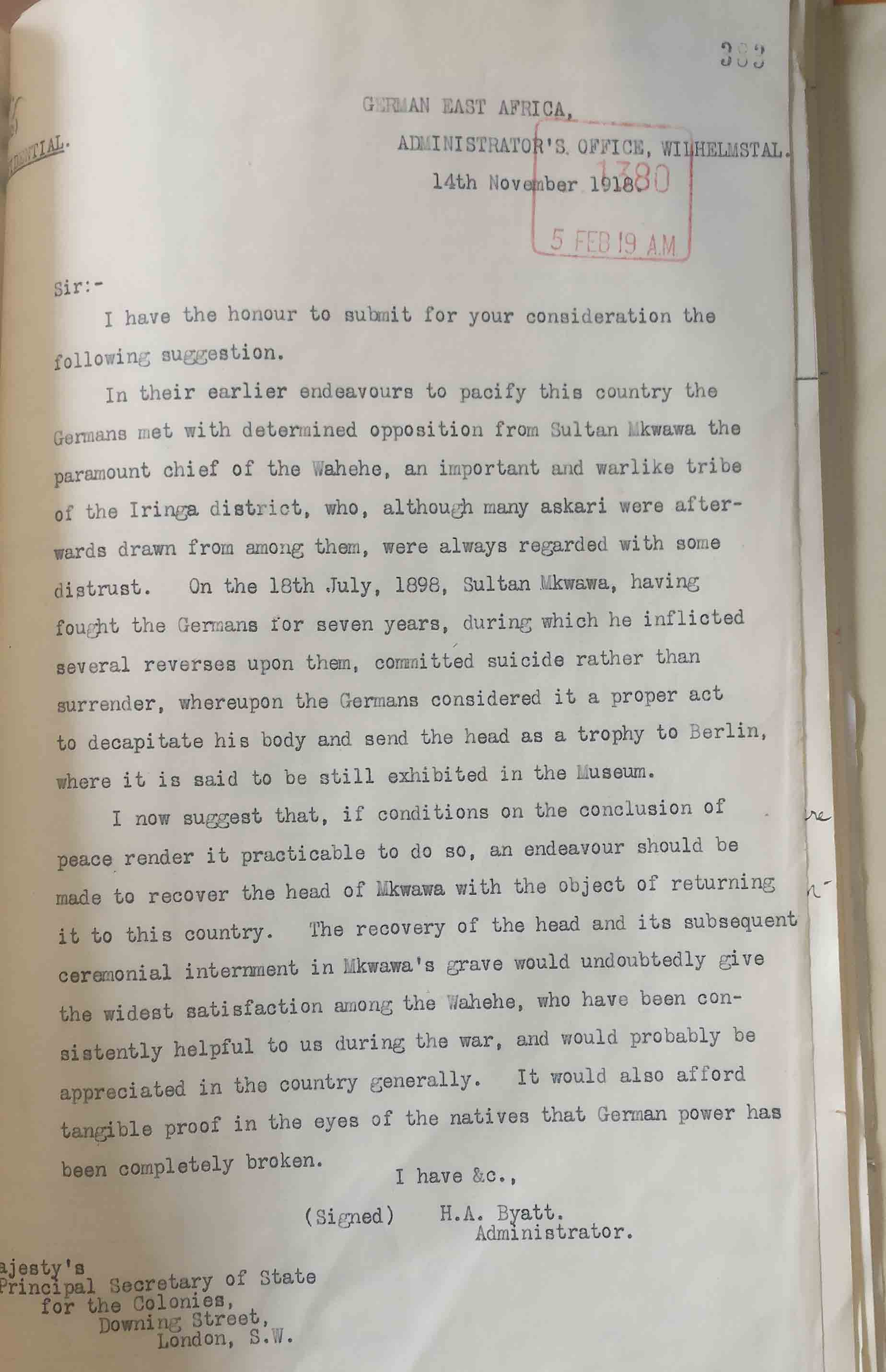 The British delegation to the Peace Conference discussed it in Paris. Knatchbull-Hugessen thought it was a good idea but ‘hardly a subject for inclusion in the general Peace Treaty’. Charles Strachey, however, pointed out that the treaty would ‘include a schedule of various objects, mainly of artistic and archaeological interest, which [had] been seized by the Germans and which [had] to be restored’. He thought the skull, which he called a ‘craniological curiosity’, could be added to the list.

This is how the skull of Mkwawa found its way into the Treaty of Versailles.

On 6 May 1920, the German Foreign Ministry explained that they couldn’t find the skull anywhere, and that it may well have been buried with the body before the war. They concluded:

‘There are no indications whatever of the head having been brought to Germany and the researches made hitherto in the skull collections of Germany have been fruitless. Paragraph 2 of Article 246 of the Treaty of Peace has thus no longer any object.’ (FO 371/3795)

All the German records available in Dar es Salaam were thoroughly searched, to no avail. No one could actually prove the skull had been sent to Berlin. In February 1921, even though the Foreign Office grudgingly admitted it seemed ‘impossible to do anything more’, the German Foreign Ministry was asked to look for the skull one last time. They repeated that ‘enquiries [had] not shown that the skull (…) [had been] brought to Germany’. On 22 August 1921, Winston Churchill, the newly appointed Secretary of State for the Colonies, wrote to Byatt: ‘in the circumstances I do not propose to take further action in the matter’ (FO 371/6042). 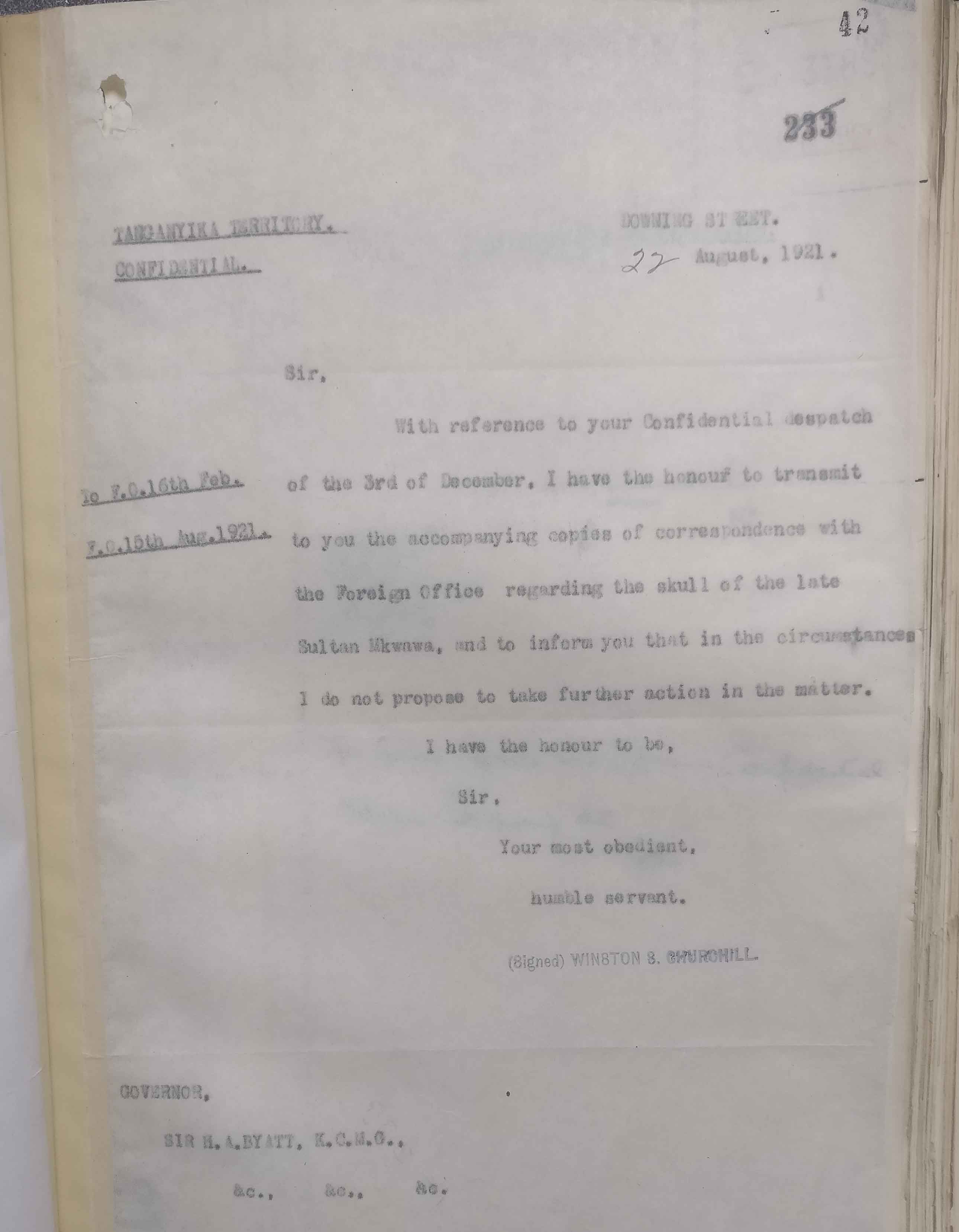 The issue was raised again in the 1930s when a Herr Henschel wrote to the British authorities in Tanganyika. He knew of an embalmed head and stated there was ‘substantial certainty’ that it was that of Sultan Mkwawa. He wanted to know whether ‘the British Government [would] have any interest in acquiring, that is to say purchasing, the skull, or [whether it would] be acceptable for one to negotiate directly with the tribe concerned’.

The government of Tanganyika wasn’t too bothered. ‘This government does not now attach much importance to the question of Mkwawa’s skull’, they wrote, but it would be a bit embarrassing if Henschel got in touch with the Hehe tribe. The head mentioned was highly unlikely to be the right one as, by all accounts, it had been skeletonised rather than embalmed, but the German Foreign Ministry was asked to investigate again. Unsurprisingly, they drew a blank. The British embassy in Berlin commented:

‘it is of course possible that the German Government have made no very serious effort either to find out what truth there is in the story or to trace the skull.’ (CO 691/124/2) 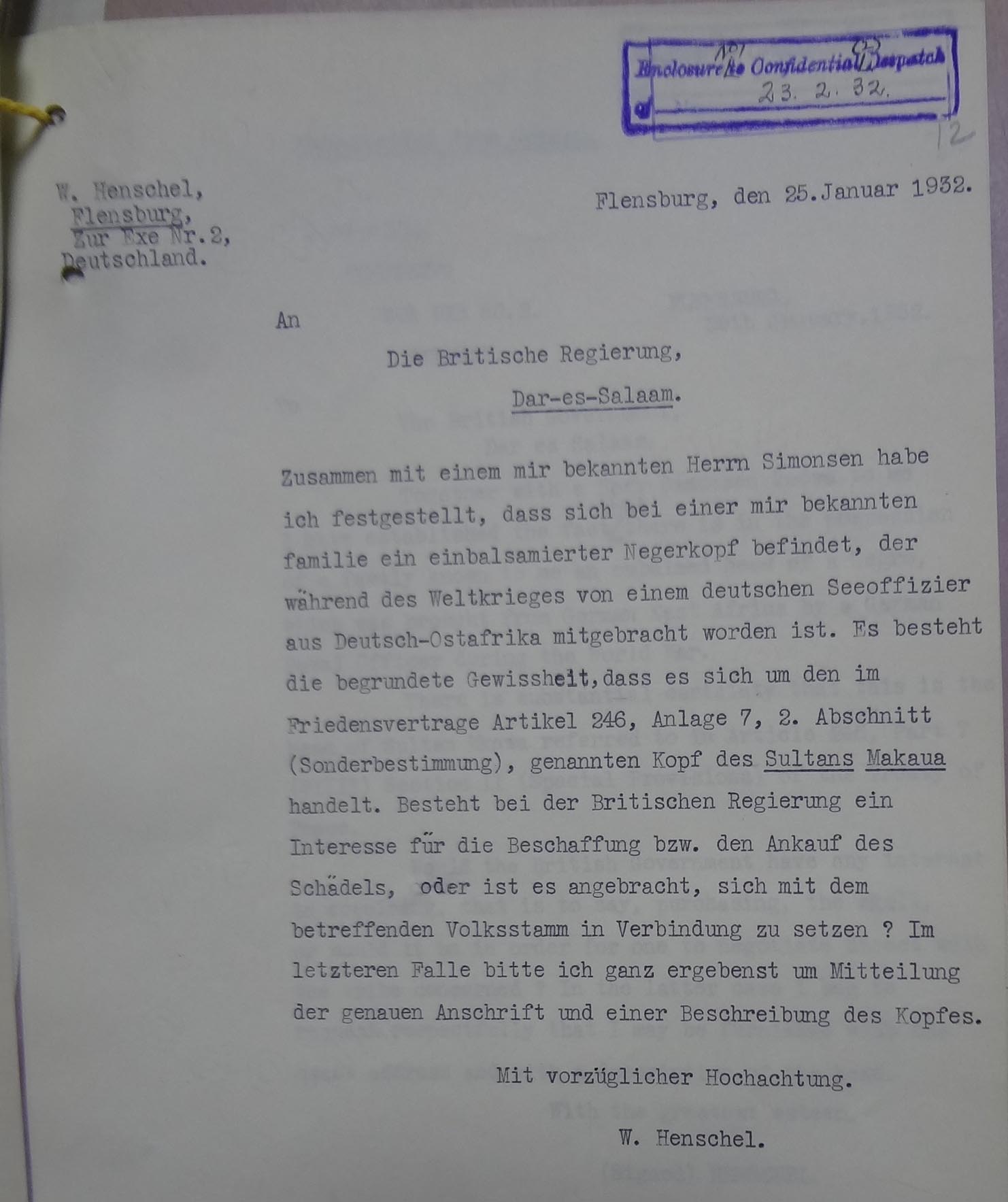 Enquiries about the skull were also made in 1939 and 1940. The American Library in Paris wanted to know more about its magical properties, and a Mrs Sherwood wanted to double-check facts for an article. By then, the Foreign Office was beginning to find it all a bit tedious. The Librarian, Stephen Gaselee, wrote – in a somewhat defeatist way:

‘It was always rather a mistake to let this get into the Versailles negotiations. We shall certainly never make any progress with it now!’ (FO 370/592)

No progress was made for the next ten years. In September 1951, the issue was raised again during a visit to Iringa by the Governor of Tanganyika, Sir Edward Twining. Twining decided to look into the mystery of the skull again, and heard very vague rumours according to which it was, after all, in Germany.

The German government explored various leads, including the possibility that the skull was in Celle Castle, where hundreds of artefacts were still in cases, waiting to be catalogued. By December, they had, once again, drawn a blank. Rolleston, of the Office of the High Commissioner, wrote to Sidney Gellaty, the Foreign Office’s Deputy Librarian: ‘I am afraid that we must now abandon hope of recovering the skull from Germany’ (CO 822/566). 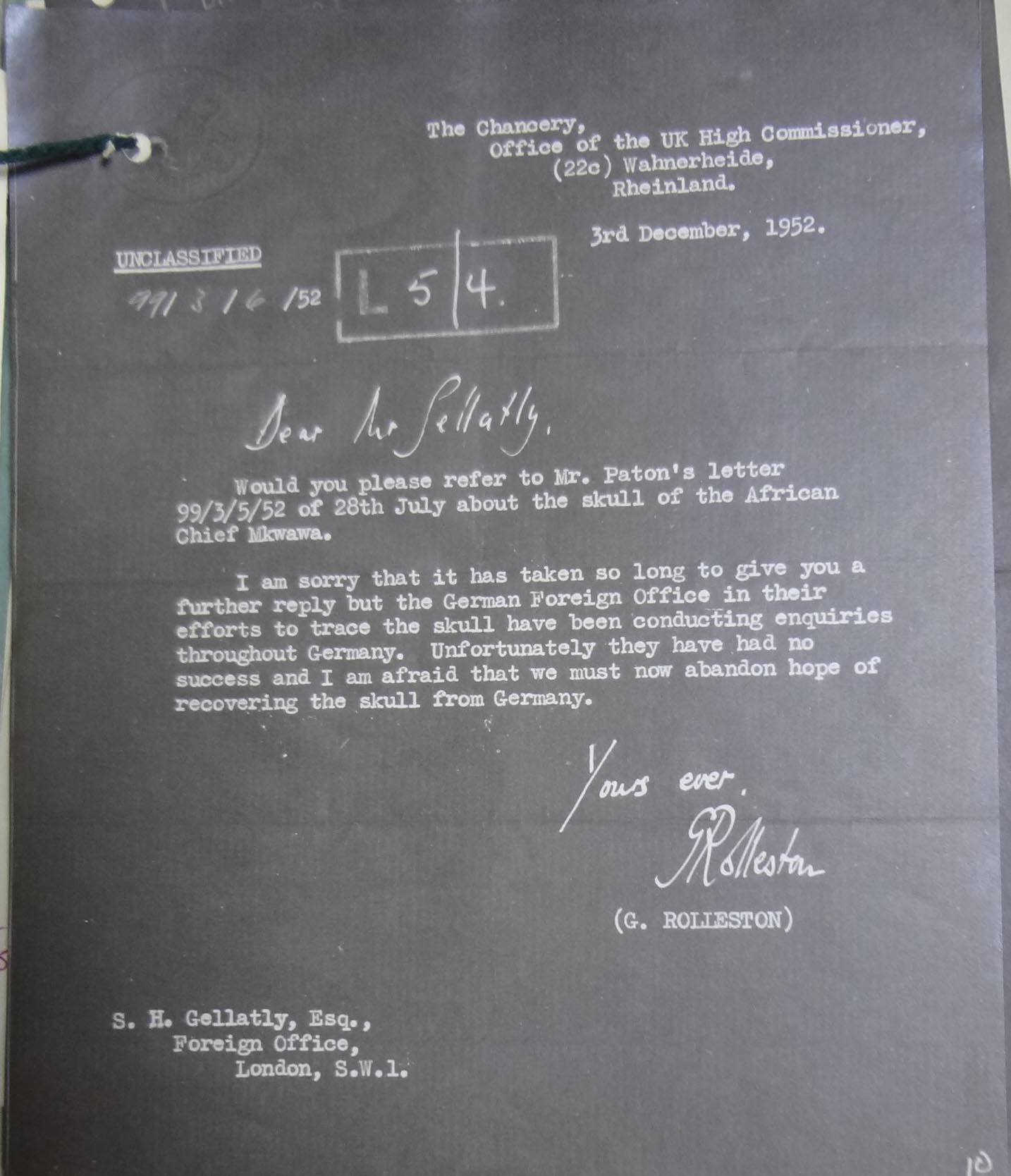 In January 1953, however, the German Foreign Ministry suddenly announced the skull might be among the large collection of the Museum für Völkerkunde in Bremen. As several skulls seemed to fit the description, they asked whether the skull had any marks by which it could be identified.

Twining reported from Tanganyika that ‘nobody could be found still alive who remembered the Sultan’ (and if people had still been alive, they might have found it difficult to identify Mkwawa by simply looking at his skull anyway!) but Mkwawa’s cephalic index could be compared to that of his grandson Chief Adam Sapi, an apparently unusual 71%.

In June, Twining himself travelled to Bremen to identify the skull. Accompanied by the consul and the vice-consul, he went to the Museum.

‘They went to a storeroom where there was a large cupboard full of skulls, and it was arranged for those which had originated in German East Africa to be put together on a table and for their cephalic indexes to be measured. There were two in the 71 group which were selected, and one of these had a hole where a bullet had entered towards the back of the head and come out in front.’ (CO 822/566)

Twining had this skull examined by a German police surgeon who confirmed the hole was consistent with a 25mm rifle of the typed used by German troops in East Africa. Besides, Twining explained, ‘the skull was bleached, which probably happened when they boiled the meat off it’ – someone at the Colonial Office noted in the margin: ‘Ugh!’ 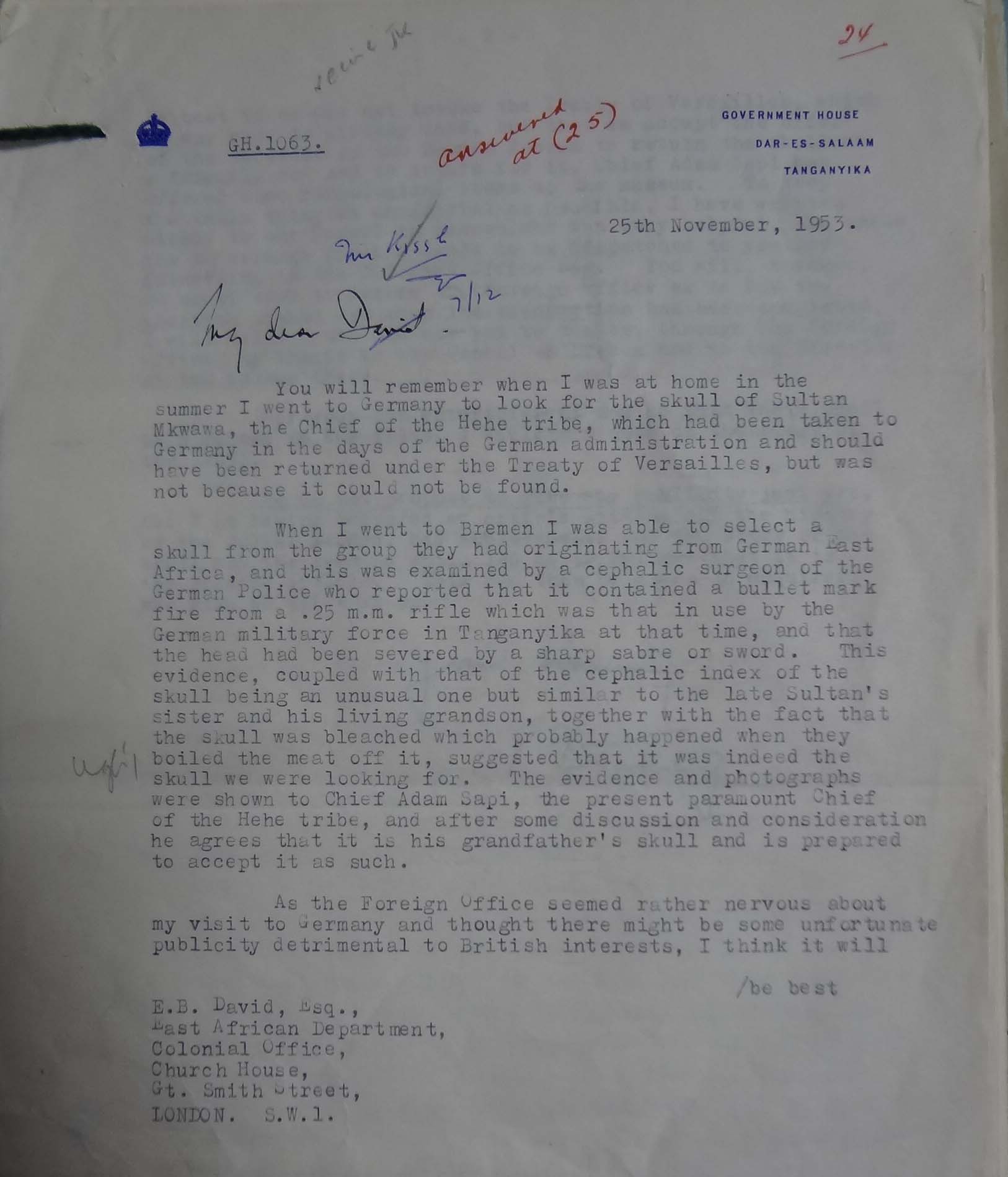 Confident he had found Mkwawa’s skull, Twining sent photographs and reports to Chief Adam Sapi, who accepted it as that of his grandfather’s.

Mkwawa’s skull was sent to London in the Foreign Office bag, which was, as Gellaty noted, ‘not immune to rough handling’, and then by air to Tanganyika where it arrived on 15 February 1954. As Twining was on a safari at the time, and as the skull seemed to have been very carefully packed, he didn’t want to open the box right away, ‘particularly,’ he wrote, ‘as it [seemed] to have poltergeistic qualities’. He reported:

‘It came here by air and on the first leg of the journey the emergency exit was blown off to the terror of the passengers who started to be sucked out (…). This peculiar quality which it possesses will no doubt add to its prestige.’ (CO 822/770) 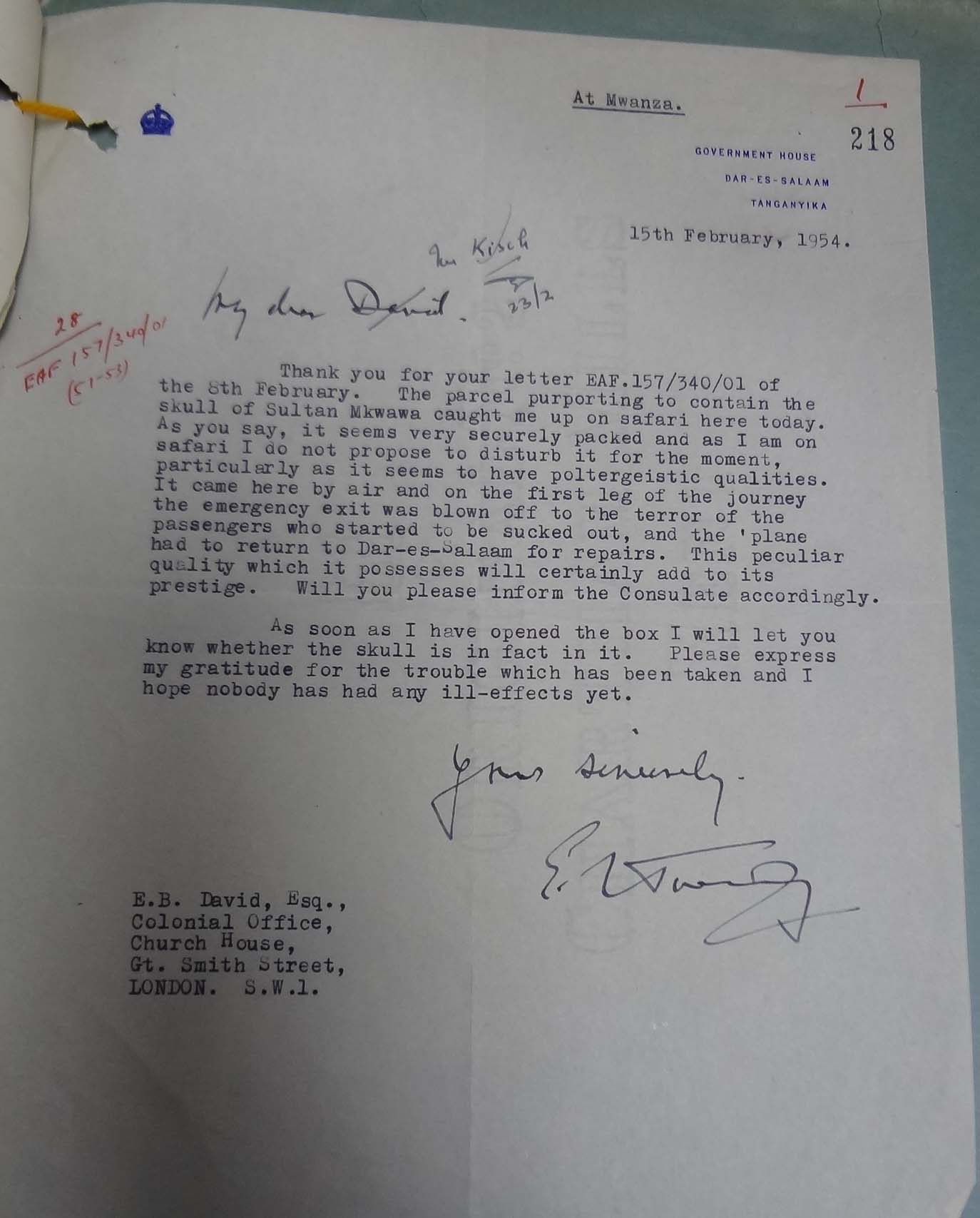 Twining turned his attention to the presentation ceremony. The Foreign Office was anxious for the Treaty of Versailles not to be mentioned at all, as it didn’t want to offend the Germans, and insisted rather heavily that it was Twining’s responsibility to make sure of it. Twining found it rather irritating and wrote:

Twining’s irritation might actually have been due to the skull itself which ‘continued to behave very badly’. He reported:

‘We had a series of mishaps which cannot otherwise be accounted for. Our poor old Bandmaster, Gulab Singh, died on the train. My A.D.C. collected a sinus and had to go to hospital. The head boy had a soda water bottle burst in his face, and the cook was struck in the face by a flying saucer. We all got hay fever and we all got very irritable!’ (CO 822/770) 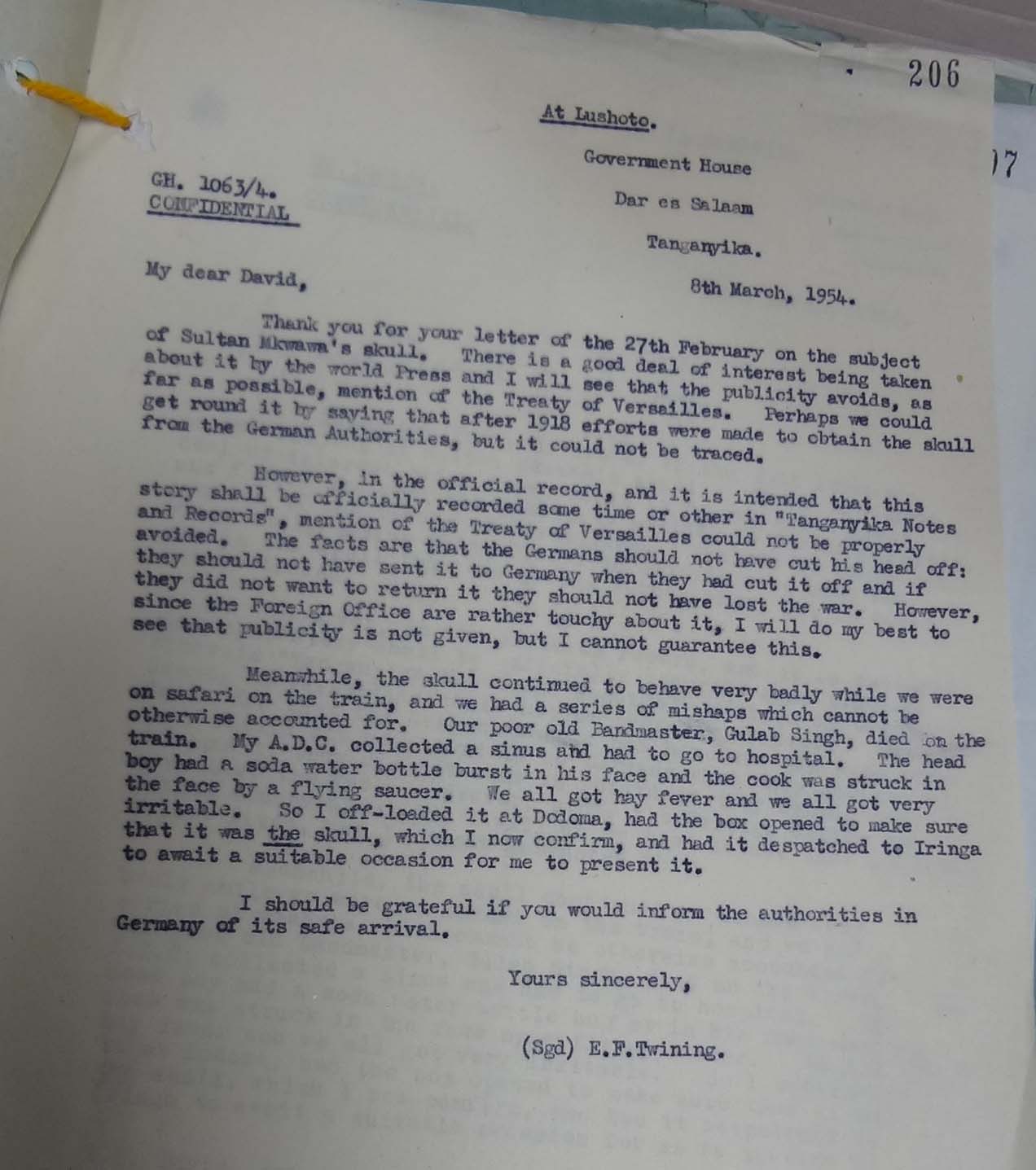 At the Colonial Office, Kisch noted: ‘obviously, the skull objects to being carted about like so much old bones and no doubt once it returns to the Hehe it will become a power for good’.

Twining finally presented the skull of Chief Mkwawa to his grandson Chief Adam Sapi on 19 June 1954, during a ceremony held in Kalenga. According to his report, the ceremony was a ‘memorable one’, attended by foreign dignitaries, ‘Chief Adam Sapi, members of his family, all the Sub-Chiefs of the Hehe tribe and more than 30,000 Wahehe’. The crowd was ‘absolutely silent’ throughout the ceremony. 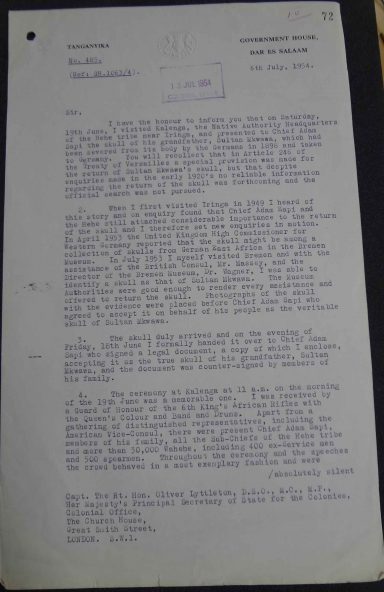 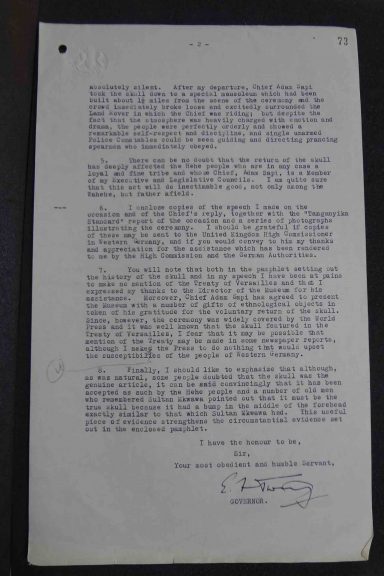 Twining reminded the audience of how great a warrior Mkwawa had been, praised the Hehe tribe and added that he was keen to see more of them in the King’s African Rifles (KAR). He also added that he hoped they would ‘continue to give [their] unstinted loyalty to Queen Elizabeth II and her heirs and successors’. As the KAR were heavily involved in the suppression of the Mau Mau uprising, this was a rather loaded statement (CO 822/770). 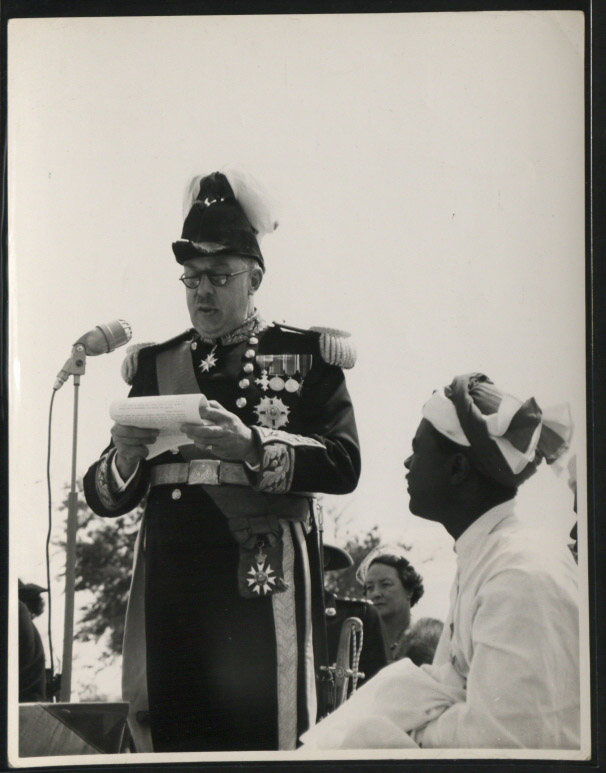 After the ceremony, the skull was taken to a mausoleum, where it still is today. As Twining noted in his speech at the ceremony, ‘the legend of Mkwawa lived’. 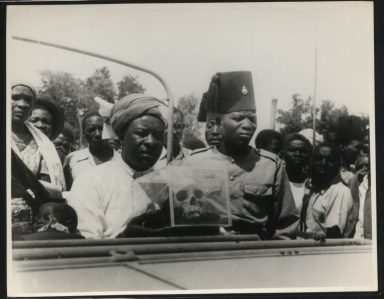 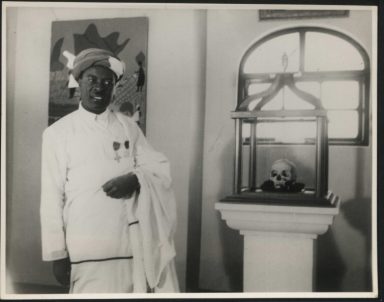 One thought on “Tanzania: The skull of Sultan Mkwawa”