Allegations that he looked down on Africans might have been true when he arrived, but he changed before he left 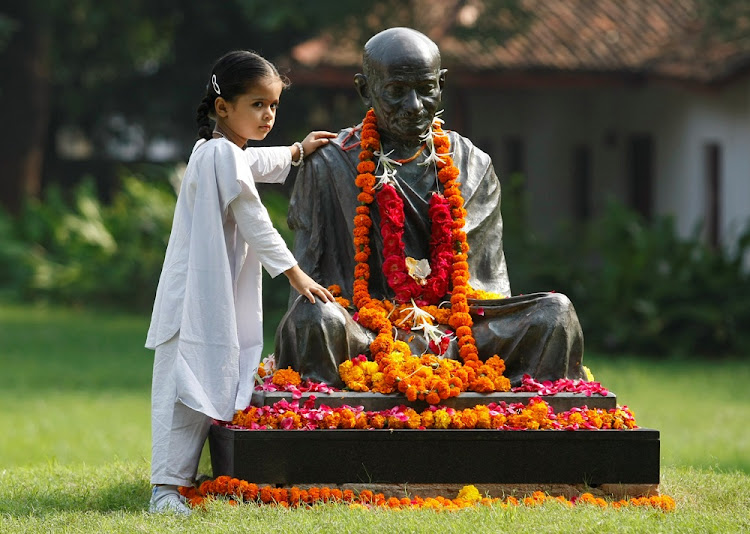 A schoolgirl stands next to a statue of Mahatma Gandhi in Gujarat, India. Picture: REUTERS

It’s a pity a scholar like Adekeye Adebajo has such a static view of Mohandas Gandhi. His perception of the Indian leader is one that is stuck in Gandhi’s early years in SA. He appears unwilling to consider that Gandhi’s thought and opinion might change over time.

It is not hard to find quotes by the Indian leader that prove Adebajo’s point; that Gandhi’s views were racist. But this fails to recognise that Gandhi’s understanding of the country and its people developed over the years he spent in SA (1893—1914).

By the time he left he was an altered man, someone who was on the best of terms with Africans, including the leader of the movement that became the ANC, John Dube.

First, let us accept that during his early years in SA Gandhi had views that were little different from many others: he viewed the African majority in racist terms. These quotes are not hard to find. In 1893, he wrote to the Natal parliament saying that a “general belief seems to prevail in the Colony that the Indians are a little better, if at all, than savages or the Natives of Africa”.

In 1904, he wrote to a health officer in Johannesburg that the council “must withdraw Kaffirs” from an unsanitary slum called the “Coolie Location” where a large number of Africans lived alongside Indians. “About the mixing of the Kaffirs with the Indians, I must confess I feel most strongly.”

It is worth noting that Africans too had racist views about Indians, but that is not the point of this brief article. Certainly by the time of his final campaign against the South African government, Gandhi had changed.

Gandhi had fought for years for the rights of Indians, particularly in the Transvaal and Natal. The shopkeepers and traders who had been the backbone of his campaigns were exhausted and in despair.

In 1913 Gandhi turned to a new group: the working-class Indians who were employed on the mines and in the sugar plantations. On October 15 1913 he had sent 16 protesters, including his wife, Kasturba, to march across the Natal border into Transvaal without permission — an illegal act. At the same time his supporters went to the mines, and then to the sugar plantations.

Public meetings were held and with the strike spreading across northern Natal Gandhi arrived, urging the indentured miners to support his call for action. By the last week in October 1913 3,000 coal miners had been joined by railway employees. A decision was taken by 1,500 workers to walk from Dannhauser in Natal to the Transvaal, to court arrest.

On October 23 Gandhi announced that he would lead miners out of their compound. Soon the strikes had spread across Natal — and despite troops being sent to break them up by force, they held out. The country was grinding to a standstill.

At this critical moment we have the account of Betty Molteno, the daughter of a Cape prime minister, who had become firm friends with Dube and his wife Nokutela. Molteno had a cottage built on the Dube estate at Ohlange near Durban and during the bitter battles that Gandhi was waging she would walk from the cottage to Phoenix, Gandhi’s base nearby.

Sometimes she would be accompanied by Mrs Dube. What is clear from the Molteno testimony is that Dube and Gandhi were not just neighbours, they were on friendly terms.

In a letter dated December 3 1913, Molteno wrote: “Had a talk out with Dube. He has no fears whatever of our coming to Ohlange Heights — no matter how much I went to Phoenix — or identified myself with the Indian Question — he says the Indian cause is the native cause — that the Indians are leading the way showing them the way to strike should that become necessary.”

Dube had openly expressed anti-Indian views in the past. He had declared that “the coolies will elbow us out of the country”. As historian Heather Hughes points out, this was a sentiment expressed many times in Dube’s newspaper, Ilanga.

Yet now he regarded Gandhi as not just a neighbour, but someone with whom his wife and he could mix and meet in friendship. This could only have happened if he saw Gandhi as someone who was no longer a racist.

This highlights that Dube was at ease in the campaign office and, more important, that he may have been party to an “indaba” or discussion on the stand the Indians would take as the campaign developed. It would have been unthinkable for the president of SA’s main African political party to participate in this way if he had believed Gandhi had racist views about Africans.

In truth, Gandhi’s attitudes towards Africans had altered dramatically. He ceased to sneer at them and regarded Africans as the equals of Indians.

After returning to India, Gandhi built perhaps the largest mass movement in history of the Indian freedom struggle by uniting people of all classes and encouraging women to participate.

He maintained his interest in SA and often wrote about the oppression of the Africans.

He said in a speech at Oxford on October 24 1931: “As there has been an awakening in India, even so there will be an awakening in SA with its vastly richer resources — natural, mineral and human. The mighty English look quite pygmies before the mighty races of Africa. They are noble savages after all, you will say. They are certainly noble, but no savages and in the course of a few years the Western nations may cease to find in Africa a dumping ground for their wares.”

In referring to “South African races”, he declared in Cambridge on November 1 1931, “Our deliverance must mean their deliverance.”

Is it any wonder that Nelson Mandela had the highest regard for Gandhi?

“He is the archetypal anticolonial revolutionary. His strategy of nonco-operation, his assertion that we can be dominated only if we co-operate with our dominators and his nonviolent resistance inspired anticolonial and antiracist movements internationally.” (Message to a conference in Delhi on the centenary of satyagraha in January 2007)

Those who campaign against Gandhi and Gandhi statues need to consider the development of the man’s ideas over time.

See also: The March that made Gandhi