James Myburgh on how and why SA’s epidemic currently lines up with Australia and New Zealand’s, not Europe and the US’s

In a recent press conference Health Minister Zweli Mkhize noted that far fewer cases of Covid-19 were being recorded than government, and the experts advising it, had expected. Instead of the number of confirmed cases increasing, day-by-day, they had actually dropped quite dramatically over the past week. The Financial Mail reported that “A team of experts had modelled an expected 4,000 cases by April 2 and an expected 7,000 without a current lockdown.” Instead, they stood at 1 462.

The reason for the drop in the daily number of new cases is that most of these had, until recently, been imported cases. With the restrictions imposed on international travel, here and abroad, these have dropped off dramatically. In addition, much of the testing so far (84%) has been conducted by private laboratories for the benefit one presumes of mostly middle class South Africans. Only 6 000 tests have been conducted by government’s National Health Laboratory Services. This will change dramatically once the existing infrastructure and technology currently used for testing for TB – using GeneXpert – has been repurposed to test for Covid-19. At this point it will be possible to process over 30 000 tests per day.

Another reason that the numbers are currently coming in lower than expected is that the model being used is wrong. Although government has not published it, it does seem that it was based upon the explosive growth in confirmed cases of Covid-19 in Europe from late February into March. The problem with this, as pointed out on Politicsweb previously, is that it discounted the factor of seasonality. There is a very strong likelihood that as an “enveloped virus” SARS-Cov-2 – like SARS-Cov-1, and the other cold-causing coronaviruses (and influenza) – will only really take-off during winter in South Africa.

The reason why ‘flu season’ occurs in the winter months in the temperate regions of the northern and southern hemisphere is not clear (it follows a different pattern in the tropics). It does seem that our immunity is somewhat suppressed in winter, and we are more vulnerable to infectious diseases. People also tend to congregate indoors and so the transmission of respiratory infections from one person to another is facilitated. Most importantly, as Ed Yong explained in a recent article in The Atlantic magazine, the reason “Coronaviruses, much like influenza, tend to be winter viruses” is because “In cold and dry air, the thin layers of liquid [mucus] that coat our lungs and airways become even thinner, and the beating hairs that rest in those layers struggle to evict viruses and other foreign particles.”

It is also possible that summer weather may suppress the severity of Covid-19 symptoms, but the evidence for that is less persuasive.

There is a view that as a novel coronavirus seasonality won’t matter so much for Covid-19. But, as the Financial Times reports, research by Mohammad Sajadi, of the University of Maryland’s Institute of Virology suggests that the SARS-Cov-2 virus is most transmissible “when humidity is low and the temperature is between 5C and 11C. At present the areas most affected by Covid-19 are between 30-50 degrees north of the equator — which includes most of China and the US, and the southern portion of Europe.” His team’s prediction is that viral transmission will slow down across the northern hemisphere with the arrival of summer, while ramping up in the temperate regions of the southern hemisphere, with the onset of winter here. 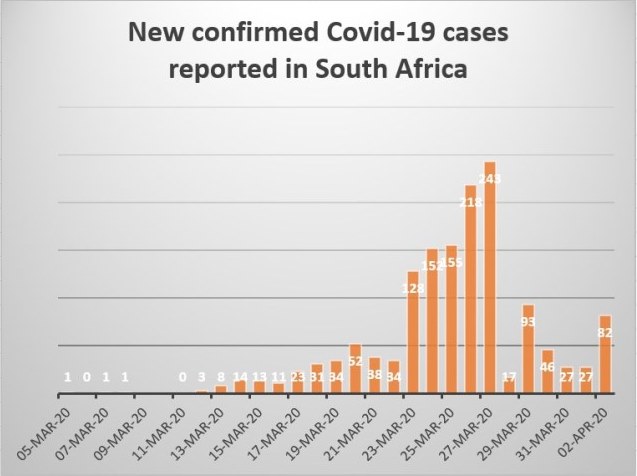 In order to understand where we are now it is useful to compare our situation with that of two fellow southern hemisphere countries – Australia and New Zealand – both of which publish on a daily basis very detailed data on the course of the Covid-19 epidemics in their countries.

In Australia over half of the cases thus far have been imported. In New South Wales, 1 419 of those 2 298 cases (61,7%) were overseas acquired. In New Zealand the percentage is somewhat lower at 51%. South Africa’s situation is probably similar. In South Africa and New Zealand then the confirmed cases, stemming from local transmission, are still in the hundreds, while in Australia they are still under two thousand.

Table 1: Covid-19 epidemic in three southern hemisphere countries vs the United Kingdom as a control

This could always be the result of under-testing but in all three countries the percentage of positive test results remain low. They are at 2% in Australia and 3% in New Zealand and South Africa. Over the past seven days, in South Africa the percentage of positive test results has been at 1,9%, and 4% in New Zealand. By contrast the equivalent figure in the United Kingdom, which has grossly under-tested, is 20,7%. Of the 50 000 people being tested per day in Germany 12% test positive. Moreover, the number of Covid-19 linked deaths recorded so far is also very low, compared to that of the United Kingdom, though this is an indicator that lags by some weeks.

The statistics on the number of confirmed cases announced on a particular day is a snapshot of the situation of several days before. It usually takes about five days for symptoms to present themselves, and there are sometimes further delays in the sample being taken, the test being processed, and then finally reported to government. Although SARS-Cov-2 began being spread all across the world from early January onwards, South Africa, Australia and New Zealand did not have raging Covid-19 epidemics – at the time these snapshots were actually taken – thanks probably to the good fortune of having converse seasonality to the United States, Europe and China.

The critical question going into winter is how embedded the virus is locally now in these countries. Even if the numbers of undiagnosed and unquarantined cases are still low right now they can still explode into the tens and hundreds-of-thousands, within the space of weeks, in the right alignment of climatic and social conditions.

As air travel has been curtailed locally and internationally you have seen a dropping or levelling off in the overall number of daily confirmed cases in all three southern hemisphere countries; as the number of new imported cases, who would also often then infect close contacts, has massively fallen. At the same time you are likely seeing the number of locally acquired cases, not directly linked to imported ones, begin to trend upwards. This is well illustrated by the following graph from the New South Wales state government: 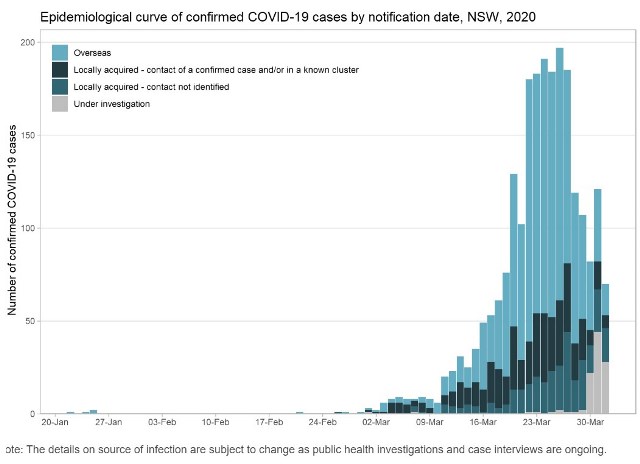 South Africa provides the least helpful breakdown of data, and the testing has also been biased towards the middle classes up until now. Zweli Mkhize has suggested however that cases of local transmissions are increasing. The first individual cases from township areas have been reported on, and there are cases of local clusters of infections. There is one at the Bill Buchanan Association for the Aged in Morningside, Durban, where five elderly residents tested positive, and another stemming from the church conference in Bloemfontein, where foreign visitors with Covid-19 initiated a large cluster of infections.

In all three countries the epidemic appears to be established and the virus circulating within certain communities, albeit still in relatively low numbers. All three countries have adopted lockdown strategies. They are now in a race against time to identify undiagnosed carriers of the virus – so they can be quarantined – before flu season arrives and the temperature becomes far more conducive to its transmission from person to person.

This is no easy task. One of the difficulties in trying to identify all carriers and thereby root out the virus is that the symptoms of Covid-19 can, in many people, be very mild, and indistinguishable from common ailments and irritations. Such people, as well as those who are pre-symptomatic, can nonetheless covertly and unwittingly pass on the virus to others, who may also not particularly notice that they have it.

This makes it very difficult to completely eradicate the virus. Even Singapore, which has had from the start stringent quarantine rules and excellent contact tracing, combined with an amenable tropical climate, has recently reported a number of new local clusters of infection.

South Africa has decided to impose a very economically and socially costly version of the lockdown. China did something similar, but at a much later stage of the epidemic, and they made absolutely sure it worked the first time around, as they knew it could not be repeated. A lot of the potential benefit in our country has been lost by the failure to align it with mass testing of people in the townships and informal settlements. As it is, that testing will only really get going towards the end of the lockdown period. Once people are moving around again it becomes much more difficult to identify and isolate existing clusters of infection before new ones break out.

Other aspects may prove in the long run to have been counter-productive. Many of the rules that have been imposed are idiotic and serve no rational purpose in checking the spread of Covid-19. Keeping people indoors for long periods actually facilitates the spread of respiratory illnesses within homes, and between them, as many people will continue to socialise with their neighbours behind closed doors. It is also detrimental to their physical and mental health, and their immunity, ahead of winter. It is very likely that many children are suffering from under-nutrition as they are no longer receiving meals at school, and/or the government is currently denying their parents in the informal sector the ability to earn an income.

South Africa’s 21 day lockdown then will likely have helped in the short term to limit the spread of the virus within the suburbs, and between cities and provinces, though less within high density areas where social distancing is neither feasible nor enforceable, to the extent that it has already established a foothold in such places.

If winter comes and the virus nonetheless breaks out then anything gained in suppressing its spread during the lockdown could be lost within a matter of days, even hours. Should this happen the current 21 day lockdown will go down in history as a “magical solution” to a looming catastrophe that achieved, at enormous cost, almost nothing at all.