There has been controversy and consternation over allegations about Churchill’s behaviour during the Second World War, when famine struck Bengal. Some have accused Churchill or indifference, or worse. Others have declared the allegation a fallacy, designed to smear one of Britain’s greatest leaders.

Here are the views of one historian, who has looked at the issue in some detail.

Starvation and disease killed millions in British India during the Second World War. Why? 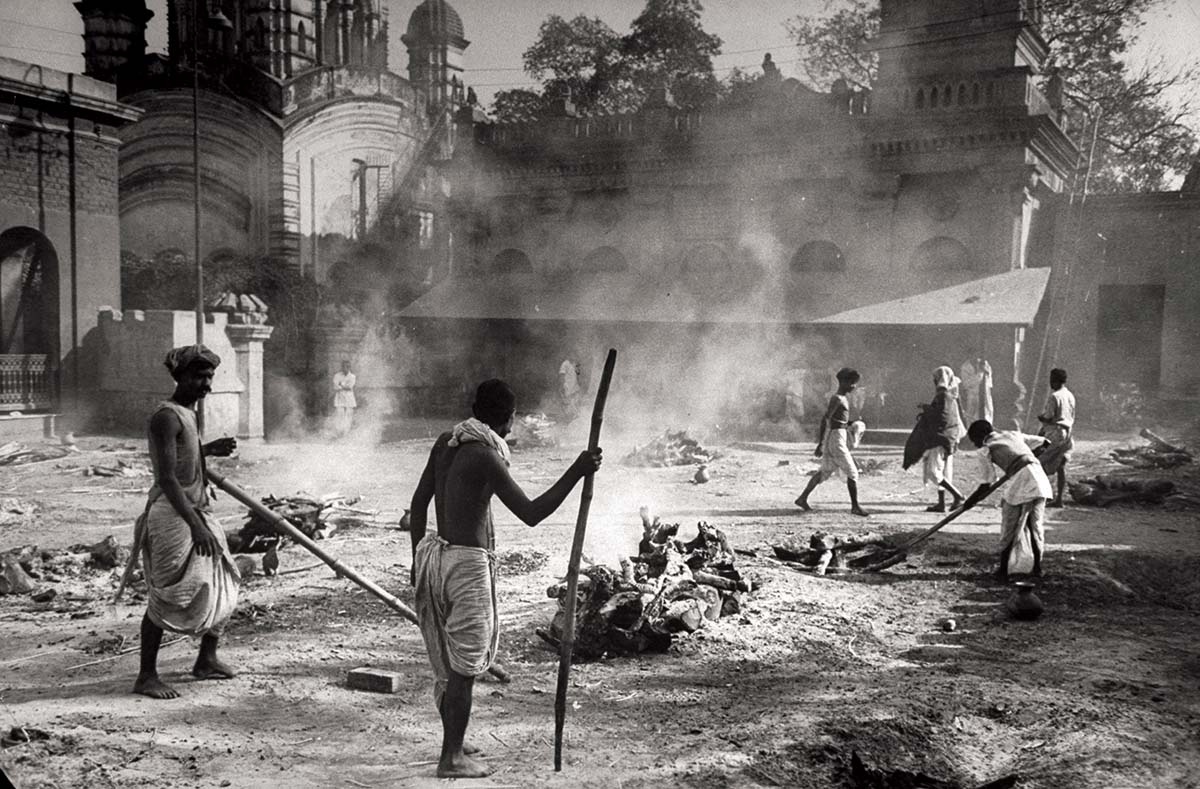 Hindus burn the bodies of co-religionists who have died of starvation, at Calcutta’s Myrone Memorial, 1943 © William Vandivert/LIFE/Getty Images

On an October morning in 1943, a scientist employed by the government of Bengal was travelling by boat along the Brahmaputra river from Bahadurabad to take up his new job in Dhaka (now capital of Bangladesh). All along the 120-mile journey, he saw bodies of dead and dying men, women and children on both banks. There was a war on and the Japanese were only a few hundred miles to the east.

But these people did not die in the war. They were victims of a famine that had begun in the summer of 1943 and continued until the end of the year. When it ended, two to three million people had died of starvation and disease.

Before Partition in 1947, the British Indian province of Bengal included the territory of Bangladesh and India’s West Bengal state. The famine happened because the price of rice, the staple crop, had risen more than three times between February and September 1943. With the Japanese occupation of Burma in 1942, the border between Bengal and Burma became the Eastern Front of the war. Requisition of rice to feed soldiers stationed here increased demand. But Bengal was an agriculturally developed region, had good transportation and a stable government. Fresh supply of rice should be easy to arrange. So why did supplies fail?

The Bengal famine was a calamity, but the mid-20th century was no stranger to them. It remains a puzzle because it is difficult to agree on an answer to the question: what caused the famine? Why is the answer so difficult to find?

Popular histories of disasters often start by assuming that, if we see a lot of victims together, a crime has been committed and a culprit must be found. This is not always a useful way to explain disasters, because a lot of people serving their self-interest (not necessarily a crime) could also produce a disaster. In this case, there are not one but four possible agents and not enough evidence to bring any one to book. One of these agents was nature, the other three were human. Scholarship has shown that each had a role to play, but culpability cannot be placed on any one of them.

The story of the Bengal Famine is, therefore, made up of four unsolved puzzles around four agents: Nature, Administration, London and the Markets.

The work on the famine by the economist Amartya Sen contains a simple, powerful argument: famines can occur not because of a harvest shortfall caused by bad weather, but due to human agency. In the case of the Bengal Famine, human agency was triggered by the Second World War and arose due to inflation, food hoarding and speculation. Sen’s argument that the famine happened without a bad harvest contradicts the explanation offered by the Famine Inquiry Commission.

His claim is difficult to test because of the way crop statistics were collected in British India. The statistical office measured annual changes in cropped areas and then applied a standard or average productivity in order to estimate the total output. In other words, the system was able to record change if low prices in one year led farmers to sow a smaller area. But it was not very good at recording change if there was, say, flood damage or disease. An astute officer could revise the yield figure downward, but doing so unilaterally was unusual. Several scholars, such as Mark Tauger, Peter Bowbrick, Omkar Goswami and Mufakharul Islam, have reconsidered and reconstructed crop output data. Their work shows that it is difficult to conclude that the harvest size did not fall.

A lot of energy has gone into the measurement issue, which is rather pointless because it does not make human agency any less important or less likely as a factor.

The global history of famines reveals that in some cases, especially when the administration is a dictatorship, a single political party or a warlord, and oversees a command-and-control system of food production and distribution, culpability for a famine can be fixed without question. Alex De Waal, a researcher of African famines, has described such disasters as holocausts, genocides or atrocities.

Bengal in 1943 was not such a situation. Food was distributed by the free market and was not subject to command and control. War-related food-grain control orders were never very effective and requisition of merchant boats for military use occurred on too small a scale to matter. The administration was a government formed by a democratic process. Although India was still ruled by the British, provinces were ruled by elected governments. Yet the relief effort was too little and too late. Why?

Conflict, rivalry and misinformation are part of the answer. ‘From the Midnapore cyclone of October 1942 to the winding down of the relief operations in 1944’, historian Lance Brennan writes, ‘the government of Bengal was shot through with conflict between the governor and the chief minister, among ministers, and between ministers and their department head.’ 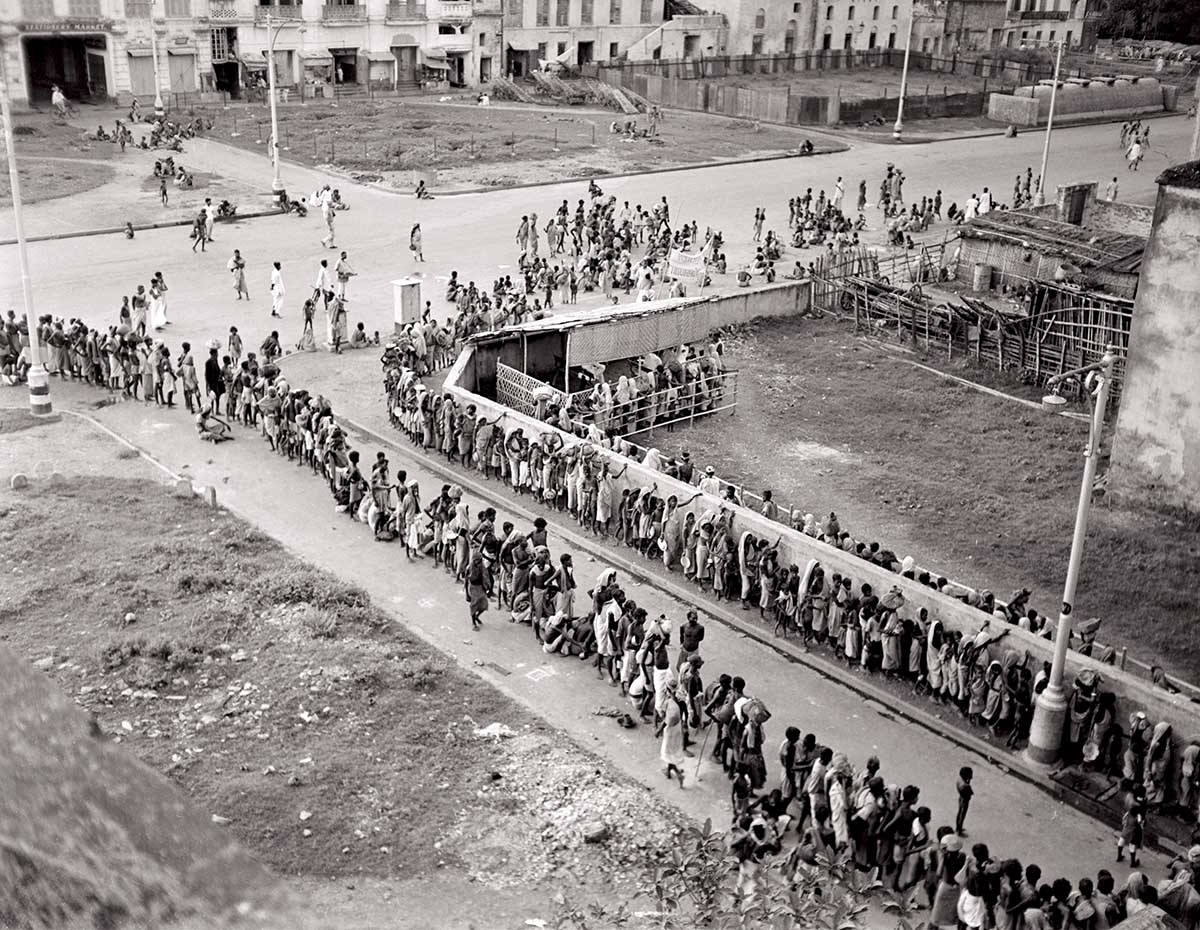 Indians queue for a soup kitchen in Calcutta at the height of the famine, December 1943 © Getty Images

Despite some dissent, the administration believed that there was no shortage of food in Bengal and that grain traders were secretly stocking up in order to cause an artificial shortage. In 1943, the key decision-maker was the Minister of Civil Supplies, Hussein Suhrawardy, an aggressive believer in the no-shortage theory. There was almost unanimous agreement that traders were to blame, according to the government in Bengal, the Viceroy Lord Linlithgow in Delhi and the Secretary of State Leo Amery in London, at least until the monsoon months of 1943.

But where did that idea come from? A habit of mind, a desire to shift responsibility, a convenient excuse, bad faith on Suhrawardy’s part, or bad market intelligence?

The historian Madhusree Mukherjee has suggested that Winston Churchill, Britain’s wartime prime minister, held racist views about Indians, which prevented Britain from supplying enough relief to Bengal in time. To be fair, the famine is just one of a number of examples of how Indians paid a price for Churchill’s beliefs.

As political history, however, the argument is naïve. There is little evidence that Churchill’s personal views about Indians influenced the policies of the War Cabinet. With Japan’s entry into the war and the fall of Singapore in February 1942, the Empire’s resources were a critical asset for Britain to fight a war that stretched from Europe to North Africa to Asia. Any prime minister would be reluctant to fight a war and negotiate with nationalists at the same time. Besides, Churchill’s reactionary views on the Empire notwithstanding, the context for almost everything that he said about Indians and the Empire was related to the Indian nationalist movement. Negotiating with it during the War could be pointless and dangerous, because moderate nationalists were demoralised by dissensions and the extreme nationalist, Subhas Bose, wanted the allied powers to lose the War (at least on the Eastern Front) and was trying to achieve that result. You do not negotiate with those who want you destroyed.

What has any of that to do with the famine? The War Cabinet did not divert enough ships from the theatres of war to Bengal, or order India to divert army rations to feed people. Was it culpable? The Cabinet believed what Calcutta and Delhi told it: that there was no shortage of food in Bengal. The Cabinet took decisions in the knowledge that the Axis powers were sinking one ship every day and had sunk around a million tons of shipping in 1942. The regions where rice might be available were the most dangerous waters to enter. Army rations were already reduced; any further cuts could risk a mutiny.

Whatever its reasons, the fact remains that the Cabinet did not do much. Was it acting in bad faith, using the Bengal administration as a convenient ally?

Administration, London and the Famine Inquiry Commission believed that grain merchants were hoarding food. It is not surprising that merchants were blamed during famines. Merchants were blamed for every famine that occurred in India during the 19th century. Most of the time, evidence demonstrates that the charge was overstated. It was dangerous for a grain merchant in a village or small town to stockpile food; they could get killed in a food riot and, on occasion, they were.

The administration acted on this belief and started raiding merchant warehouses. The merchants were Hindus, so the Hindu Mahasabha protested their persecution, while the Communists insisted the merchants were to blame. What did the administration find? Some excess stocks of kerosene, sugar and coal. But few traders were found with, and prosecuted for, excess stock of rice. Given the scale of the shortage, hoarding was inconsequential, as the historian Cormac Ó Gráda has shown. 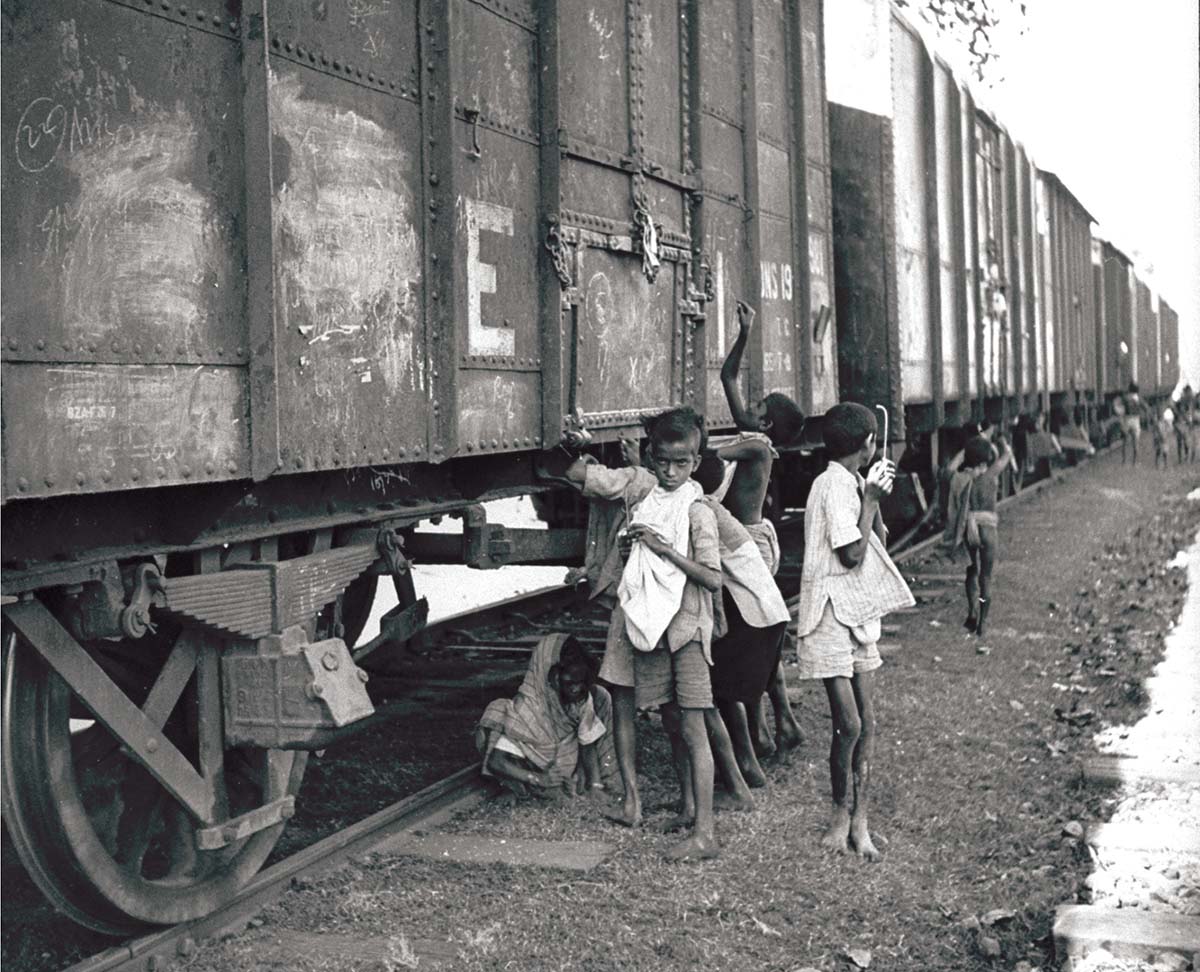 India had free trade and a good railway system, so why didn’t more food flow in from other regions of India into Bengal? The transport system was stressed but, more than that, there was fear in northern India, where the harvest did fail in 1942, and anxiety in rice-producing Bihar and Orissa that merchants in Bengal would hoard local stocks. As a result, formal and informal restrictions on cross-border trade remained.

The Bengal Famine of 1943 has never been fully explained: the culpability of colonialism or the agency of weather is not proven. Indeed, nothing is proven. We continue to live with four huge unsolved puzzles.

Is this subject over-researched and over-determined? I do not think so. Instead of an explanation, historians can study a grid with four agents: Nature, Administration, London and Markets. When a new work is published, you may treat it as new evidence in an unsolved crime. The grid will allow us to see which one of these four agents it sheds most light upon.

Tirthankar Roy is Professor of Economic History at LSE and the author of A Business History of India (Cambridge, 2018).