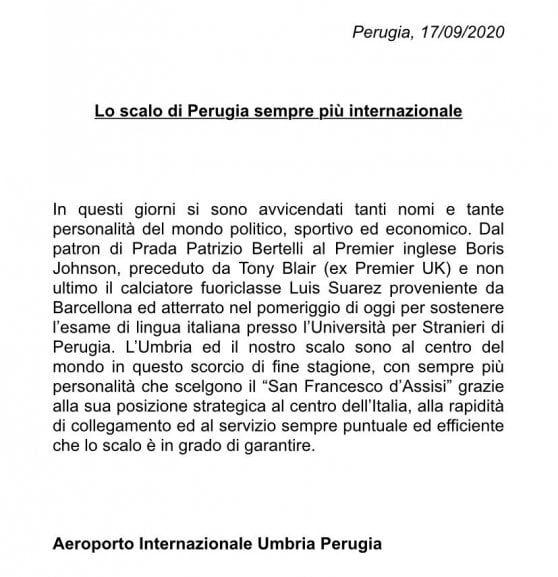 The UK has a serious coronavirus crisis underway and that same week there were Brexit talks with EU chief negotiator Michel Barnier in London. Negotiations are even more delicate and at risk of breaking up now, after the recent and sensational U-Turn of Mr Johnson whose government two weeks ago announced that he was going to break the international law “in a specific and limited way”, ignoring the legally binding divorce agreement on Northern Ireland, in case was necessary. A document that Johnson himself had signed in October 2019 and defined as “fantastic”, before his triumph at general elections last December.

On the afternoon of Thursday September 17th, a famous Uruguayan Barcelona footballer, Luis Suarez, arrived in Perugia, welcomed by cheering fans and supporters, to take an Italian exam in order to obtain the Italian passport. Immediately afterwards, the international airport of Perugia issued a proud statement: “Over the past few days, many names and personalities from the political, sporting and economic world have arrived here in Perugia. From Prada CEO Patrizio Bertelli to the British PM Boris Johnson, preceded by Tony Blair (former UK premier) and not least the champion footballer Luis Suarez from Barcelona, who landed this afternoon to take an Italian language exam at the University for Foreigners of Perugia. Umbria and our airport are at the center of the world at this end of the season, with more and more personalities choosing the “San Francesco d’Assisi” airport thanks to its strategic position in the center of Italy, the speed of connection and the always punctual and efficient service that the airport is able to guarantee”.

Boris Johnson in Perugia “over the past few days”? Could that be possible? In the past, Johnson had frequented several times Umbria’s main town, mostly to visit his longtime friend Evgeny Lebedev, 40 years old, a Russian-British businessman and editor of the London newspaper “Evening Standard”, well known also for his famous weekend parties at his majestic estates in Umbria. Johnson’s last trip there on the record caused quite a scandal: on April 28th 2018, as Foreign Minister of May’s government, he flew to Umbria without security less than two months after the Russian novichok poisoning of the double-agent spy Sergej Skripal and his daughter in Salisbury, in order to join one of the parties in fabulous Palazzo Terranova, Lebedev’s fairytale residence, shrouded in impenetrable secrecy. At the same place, that same year, the Saudi Crown Prince Mohammed Bin Salman had come for a dinner together with Virgin boss Richard Branson. The following morning, on April 29th, Johnson turned up at San Francesco d’Assisi airport, still unescorted, and looking sleepy and drained, with his shirt out of trousers and his wrinkled attire, as if he had slept in those same clothes until a few hours before embarking a Ryanair flight to London Stansted Airport.

Asked about the September 17th press release mentioning Johnson on the same day, a Perugia airport spokesman confirmed it, adding that both “Johnson and Blair were here in Perugia last week”. An airport worker confirmed Johnson’s presence “on Friday Sept 11th or Thursday Sept 10th, I don’t remember well”. Another airport source assured that the British Prime Minister arrived “on Friday September 11th at 2 pm and left on Monday September 14th at 7.45”, while former PM Tony Blair was reported to be in Perugia from 8 to 11 September, according to the same source.

Earlier in the morning of Friday September 11th, the British Prime Minister was reputed to working in Downing Street. Later that day, the PM also had a Zoom call with 256 Tory MPs on Brexit: Johnson’s Internet line was remarkably poor that evening and broke down for about 20 minutes. “When Johnson came back on the line he joked that he should probably invest in gigabit broadband”, an MP told “Politics Home”.

As for the outward journey, however, there were two other private flights from London Farnborough airport that week: one was a Hawker Beechcraft jet landing in Perugia on Thursday 10 September at 1.30pm, the second one a Bombardier Challenger 350 landed at 10.59 on Saturday 12 September. According to the website Flightradar24, Johnson’s alleged return flight from Perugia started at 8.27 am on Monday by a Embraer Legacy 500 jet, landing at 9.39 am local time at the RAF British military airport Northolt. Which is located, among other things, in Ruislip, a western suburb of London, partly the constituency of Johnson (Uxbridge and South Ruislip).

According to sources from Perugia airport, the return plane was supposed to take off at 7.45 am that day. However, apparently there was a problem because it took off 40 minutes later than the scheduled time. That Monday morning, September 17th, Johnson and the British Home Secretary, Priti Patel, were due to visits in London, then everything was cancelled at the last moment. That afternoon Downing Street added that Johnson “was in London and attended a coronavirus meeting in the morning”.

On Saturday September 12th, Johnson, together with his girlfriend Carrie Symonds, reportedly baptised his little son Wilfred, as broken last Monday by the “Telegraph” and the “Sun”, an event that Downing Street hasn’t commented on. On that occasion, it had been defined “an ultra-secret ceremony”, for which no details or the place were known, but a source told the “Sun” that “they’re not intending to release photographs as it was a special private moment. It was a priority for Boris and ­Carrie that the entire ­baptism was Covid secure. There was no reception or party afterwards. Perhaps they’ll have a big celebration whenever they get married.” Checking the website Flightradar24, almost half of the very few flights operating at Perugia airport that week are those connecting the Umbria main town and London. Additionally, on Saturday at 3.34 pm, a mini-jet from St Tropez lands in Perugia.

Lebedev and Johnson have a strong ten-year bond: they met in 2009, when the former was dating “Spice Girl” Geri Halliwell and the latter was Mayor of London. That same year, Lebedev bought the Evening Standard newspaper together with his father and former KGB spy, Alexander. Since then, Evgeny and Boris have never left each other: Lebedev has even a dog named after the prime minister. In 2012, Johnson went to Lebedev’s Perugia for another party and Lebedev reportedly paid for everything, from private jets to taxis. In addition to the infamous trip in 2018, Johnson celebrated with the Russian millionaire also the landslide victory of the 2019 election and recently he handed him a peerage, making “Lord Lebedev” the first Russian-British member of the upper house of the glorious British Parliament. Mr Lebedev wasn’t available for a comment. The mystery goes on.