Nigeria: The Shell oil company is to begin negotiations with British lawyers acting on behalf of a community in the in the Niger delta.

The talks – to be held in the delta city of Port Harcourt next week – come 5 years after a massive oil spill devastated the fishing community of Bodo [see press release below].

The firm taking on Shell is Leigh Day, which has won a string of cases in the developing world.

These included victims of the Mau Mau conflict in Kenya and the dumping of chemicals in Ivory Coast by a firm working for Trafigura.

Martyn Day says talks with Shell began in 2011, “but they didn’t go anywhere.”

He says the Bodo community has lost a vast area of the 100 sq km of mangrove swamps, which were once rich breeding grounds for the fish.

“They have no other industry,” says Day. While some 15,000 of the community are directly effected, Martyn Day won’t disclose what he is asking for in terms of a settlement.

That will be revealed when the talks get under way.

Negotiations will begin next week (9th September 2013) in Nigeria between Shell and the UK lawyers taking legal action against the oil giant in the High Court in London on behalf of 15,000 Nigerians who claim their community was devastated by two massive oil spills in the Niger Delta in 2008 and 2009.

The oil devastated the environment surrounding the community of Bodo, in Gokana Local Government Area, Rivers State, Nigeria. Bodo is a fishing town. It sits in the midst of 90 sq km of mangroves swamps and channels, which are the perfect breeding ground for fish and shellfish.

Expert evidence indicates 1,000 hectares of mangroves have been destroyed by the spills and a further 5,000 hectares have been impacted. Dr Erich Gundlach of E-Tech, a specialist oil spill response organisation, describes the loss of mangrove habitat as the largest ever recorded due to oil spillage.

In 2011 Shell admitted liability for the spills but continues to dispute the amount of oil spilled and the extent of the damage caused.

Leigh Day began the multi-million pound legal action at the High Court in March 2012 after previous talks broke down over a compensation and clean up package for the community. The UK based law firm, which represents the Bodo Community, is demanding not only compensation but also urgent action by Shell to clean up the damage.

To date nothing has been paid in compensation and no clean up work has begun.

The Bodo community is a rural coastal settlement consisting of 31,000 people who live in 35 villages.  The majority of its inhabitants are subsistence fishermen and farmers.

Until the two 2008 spills Bodo was a relatively prosperous town based on fishing.  According to the claimants lawyers the spills have destroyed the fishing industry. They claim Shell’s response has not been to try and speedily recompense the people of the community but to delay and prevaricate and to use the media to disassemble the position.

Shell, who last month announced quarterly earnings of $4.6bn, have provided one-off relief materials in June 2009 amounting to 100 bags of rice, beans, sugar, 100 cartons of milk, tea, tomatoes and oil in June 2009 which was entirely inadequate for a community of 31,000 people.

“Our clients need their livelihoods back and their environment restored. Shell is finding every excuse under the sun to avoid liability for the full extent of the damage done by these spills even blaming our clients who had, before the spills, been recognised by Shell as a responsible community.

“This is an impoverished region whose livelihoods from the creeks have been decimated. They want to be fairly compensated for their losses from the time the spill took place until the oil is cleaned up and the Bodo Creek is returned to its natural state.

“Shell’s position on clean-up has been pitiful. Since 2011we have been constantly trying to get Shell to agree a proper clean-up programme across the many thousands of hectares impacted including bringing in international experts in the field. Their response has been to start a rather paltry pilot scheme where they brought in unsupervised and inexpert local labour to clean up areas that are only a small fraction of the overall area impacted.

“Rather unsurprisingly the areas initially cleaned up are now back to pretty much the same state as before.  The whole exercise has been a waste of time. This situation has led to Bert Ronhaar, The Dutch Ambassador to Nigeria, becoming involved. He will act as mediator with the community and Shell at a separate meeting to be held at the end of September 2013. It is hoped this will lead to international experts being appointed and a proper process of clean up where the Bodo Creek is cleaned to international standards as speedily as possible. 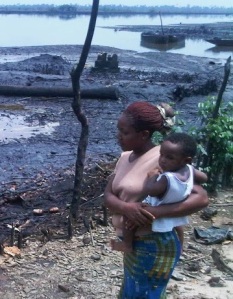 “It is entirely depressing that one of the largest companies in the world is acting like the playground bully, trying to batter local people whose lives have been devastated, into submission. We will be doing our damnedest to ensure that Shell pay out a fair amount for the damage they have caused and put the Bodo Creek back into its pre-spill state.”

The United Nations, Amnesty International and the Nigerian government have all expressed deep disappointment with Shell’s lack of action in the region.  Impoverished local fishermen have been left without a source of income, and have received no compensation.

The Ogoni fishing and farming communities have accused Shell of applying different standards to clean-ups in Nigeria compared with the rest of the world. Amnesty has described the oil spill investigations  ‘a fiasco’.

Shell say they were informed of the first leak in early October 2008. The community says by this date oil had already been pumping into the creek for approximately six weeks. Even then it took Shell over a month to repair the weld defect in the pipeline.

The second spill occurred in December 2008 and was also the result of equipment failure.  It was not capped until February 2009 during which time even greater damage was inflicted upon the creek as crude oil pumped into the rivers and creeks per day over a period of two months.

The Trans-Niger Pipeline has suffered an incidence of operational oil spills between 2006 and 2010 at a rate 133 times greater than the European average.

The legal action will present evidence from research (2) carried out just before the spills which states that the main river channels in the Bodo creek had no physical trace of oil, were ‘near pristine’, were rich in fauna and free of hydrocarbons.

Following the two spills, in September 2009, a Post Impact Ecological Assessment study (3) of the oil spillages was carried out on the Bodo creek. This found a severe reduction in the abundance of marine life with shellfish no longer present and fish numbers dramatically reduced.

The United Nations Environment Programme’s Environmental Assessment of Ogoniland 2011 has backed up these findings. It surveyed pipelines and visited all oil spill sites including the Bodo creek. It found Hydrocarbon contamination in water in some sites to be 1,000 times higher than permitted under Nigerian drinking water standards.

All photographs from Leigh Day