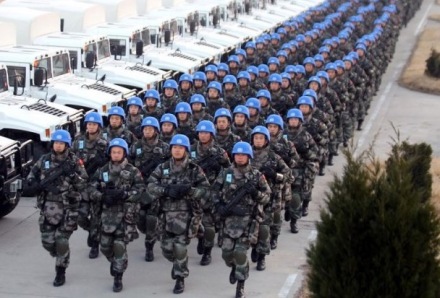 The Chinese have long attacked the West for its imperialist and militarist aims in Africa.

Well, it now looks as if Beijing has joined the pack.

It is reported (see below) that China has completed negotiations with Djibouti for a base – joining the French and United States, which already have facilies in this tiny Horn of African nation.

This is part of a gradual ratcheting up on China’s military presence in Africa. In September 2014 Chinese troops were deployed to Mali, Sudan and South Sudan.

The Chinese military were also implicated in the diamond trade at Marange in Zimbabwe.

But the idea of a military base in Djibouti takes the Chinese presence in Africa to an entirely new level.

China Has ‘Reached Consensus’ With Djibouti on Military Base

In addition to moving forward on a new military facility, China seals a series of trade deals with Djibouti.

China and Djibouti have “reached consensus” on building logistical facilities in the African state for the use of China’s military, China’s Foreign Ministry said on Thursday.

The news confirms reports that have been swirling since May 2015, when Djibouti’s President Ismail Omar Guelleh said his country was in discussions with the Chinese over a possible military base. China’s Foreign Ministry confirmed the negotiations for the first time in November of last year.

Now, it appears talks are close to an end. “China and Djibouti consulted with each other and reached consensus on building logistical facilities in Djibouti, which will enable the Chinese troops to better fulfill escort missions and make new contributions to regional peace and stability,” Foreign Ministry spokesperson Hong Lei said on Thursday.

Hong’s comments referred to anti-piracy escort missions in the Gulf of Aden, which China participates in as part of a United Nations-sanctioned international effort.

Hong pointed out that, while on anti-piracy missions in the area, China has “encountered real difficulties in replenishing soldiers and resupplying fuel and food” – problems the new facility in Djibouti will solve.

“The nature of relevant facilities is clear, which is to provide logistical support to Chinese fleets performing escort duties in the Gulf of Aden and the waters off the Somali coast,” he said.

Just before the Foreign Ministry noted a “consensus” on China’s new military facility in Djibouti, the two countries sealed a series of economic deals. Guelleh said in a statement that he had signed three agreements: one establishing a free trade zone in Djibouti; one increasing Djibouti’s role as a transshipment hub for trade between China and the rest of the world; and one regarding a legal framework that would allow Chinese banks to operate in Djibouti.

Hong noted that “friendly relations between China and Djibouti have been forging ahead over recent years,” a trend reaffirmed by the meeting between Chinese President Xi Jinping and Guelleh on the sidelines of the Forum on China-Africa Cooperation (FOCAC) summit in South Africa last December.

The recent agreements between China and Djibouti are part of “efforts to implement the consensus reached at the Johannesburg Summit, in a bid to drive development in Africa,” Hong said.

The trade agreements emphasize that Djibouti’s strategic location at the intersection of the Red Sea and the Gulf of Aden is attractive for China for more than military reasons. In fact, the country is an ideal spot for inclusion of China’s “21st Century Maritime Silk Road,” which will stretch from China to the Indian Ocean, the Gulf of Aden, and up the Red Sea through the Suez Canal to the Mediterranean. Egypt is already on board for the project; Djibouti is another natural hub for the “Belt and Road.”

The newly agreed-upon free trade zone and the use of Djibouti as a transshipment center both point to such a role.

If the Maritime Silk Road unfolds as planned, increased trade through the Gulf of Aden and Red Sea will mean more need for anti-piracy missions – which makes it even more crucial for China to have resupply facilities nearby.

While the Maritime Silk Road and its overland twin are not military initiatives, it’s easy to see how military strategy will follow economic investments. Djibouti, soon to be home to China’s first overseas military facility, is a prime example.

One thought on “China’s first military base in Africa”