This is a generous assessment of my book by Woldeyesus Ammar, of the Eritrean People’s Democratic Party. 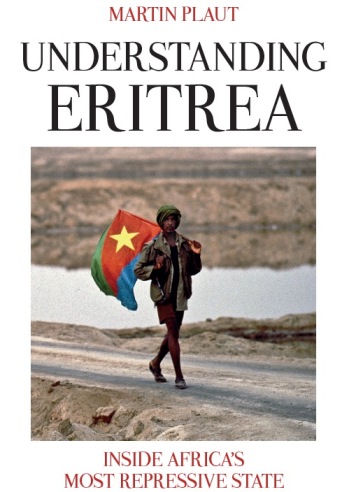 The year just ending also happened to be a period in which a good number of publications were released for the wider public with the yet unfulfilled aim of making Eritrea and the situation of its people better understood by others. Among them were  the official submission to the UN General Assembly and the Security Council the final conclusions of the UN Commission of Inquiry on Eritrea along its earlier 483-page comprehensive report, and follow up reports of the UN Monitoring Group on Eritrea and Somalia. Another worthy addition to the long list of new research papers and recent publications on Eritrea was  Martin Plaut’s Understanding Eritrea, a paperback published in October 2016 under the aptly chosen subtitle: ‘Inside Africa’s Most Repressive State’.

Martin Plaut and his new book on Eritrea

Earlier this year, journalist/researcher Martin Plaut mentioned to me that he was writing a book on Eritrea, adding:  “it can prove to be difficult to  write on a subject with so many experts.”  For sure he was kidding.  Himself one of the veteran Eritrea observers from his BBC days in the 1980s and till now; producer of authoritative publications on African affairs and current Horn of Africa and Southern Africa researcher for the Commonwealth Institute, Plaut has  again come out with a valuable reading material for all those interested to better understand Eritrea and its unending woes. (And no wonder that he one of those in the watch-list of the repressive regime in Asmara,  whose paid agents vainly try to silence him and his likes through ‘threats’ and name calling.)

The book makes a sweeping coverage of history – not actually to tell the country’s history, but to give a sufficient picture as to why Eritrea’s problems linger and why they are what they are. Also through a careful screening, he narrates and assesses events of critical importance in Eritrea’s sad post-liberation decades. In addition to squeezing out every bit of indispensable facts from the voluminous UN Inquiry Commission and Monitoring Group reports – facts that might have been  overlooked even by our most avid readers in the opposition camp – Plaut also surprises many a reader by putting more light on information not fully known to the ‘experts’ on the subject. And all this in a small space of not more than 250 pages!

Nowadays, if one mentions the name Eritrea, one can hardly avoid thinking of :

The book does fairly adequately address these hot issues of importance to Eritrea and all concerned about the plight of its people. Plaut’s findings on the regime’s illicit economic activities and deals are also of particular importance. He does not mention  any production of unwanted items by the regime after liberation although, according to the book, the front that Isaias Afeworki led to victory is said to have cultivated marijuana in areas under its control.

In its early pages, the book prepares the reader to expect Eritreans to be an outcome of a difficult history carrying traces of so many rulers, and a complex identity of diverse groups speaking nine languages, belonging to two major religions, living in different environments and with co-ethnics separated by artificial colonial boundaries.  It also asserts that peoples of the region were culturally inclined  “to be closed and secretive” and that the left-wing ideologies of the 20th century did contribute in  hardening further these traits in their elites. The author finds leaderships in the region to be  “veiled and obscure” –  culturally and partly intentionally. Therefore, even genuine differences could not be resolved through open discussions because of the “cult of confidentiality” that existed in the liberation movements.

The new Eritrean regime thus remained obscure by keeping everything secret. Even Eritrea’s population was wanted to remain an unknown figure. The last population census was made in 1931. According to Plaut, the population estimates for Eritrea today range from 3.2m to 6.5m, and the regime in Asmara can chose any figure when it wants to project fictitious percentiles on growth in education, health services, the economy etc.

The Eritrean regime’s numerous quarrels with neighbours, in particular the one with Ethiopia, are given sufficient space and insightful analysis. Regarding relations with Ethiopia, the author considers the question of the border to have been of critical importance although the Eritrean head of state, Isaias,  at first gave it little attention.

To his credit, Haile Mengerios, at that time regime representative in Addis Ababa, is said to have raised the border question early in 1992 but Isaias “rebuffed” him. The book also mentions that  even Yemane Ghebreab (monkey), then a novice in official diplomacy, blamed Haile Menkerios of being “obsessed with the border issue.”

One clear omission regarding the border issue is the book’s  failure to mention how much other Eritreans were very seriously concerned about that problem starting in the latter part of the 1970s when disagreements led to serious armed clashes between the Eritrean Liberation Front (ELF) and the Tigrai People’s Liberation Front (TPLF).

The author observes serious absence of checks and balances and unwillingness to compromise both in Eritrea and Ethiopia, and as such, when relationship between two individuals break down, there remain “no official structures to fall back upon.”  He also hints at the ominous probability – that no one can be sure that “full-scale war will not resume” anytime in the future.

There have been heated pro and con arguments about the failure of the concerned   states (especially Ethiopia) to accept the “final and binding” decision of the  arbitration Tribunal on the border problem with its epicenter at Badme. After reading this book, I am inclined to conclude that it was a misleading email by an OAU staff member and  observer at the Tribunal that hugely contributed in further complicating the possible acceptance of the arbitration decision.

The Tribunal gave only coordinates on the map without mentioning Badime and its location. When given the first copy of the decision, the OAU observer at the Tribunal wrongly interpreted the coordinates and emailed to his headquarters saying that Badime was given to Ethiopia.

The book informs that it was Martin Plaut of the BBC  himself who was the first to correctly read the map and to report that the OAU email was based on wrong interpretation. Plaut’s interpretation was backed by experts reached by BBC. At that time, Ethiopia was already celebrating victory and its foreign minister said all what “a victor” is expected to say. When the BBC report was broadcast, Ethiopia sent to London its minister of Information to ask the BBC to withdraw  its report,  but to no avail.

As we all know, it is now nearly 15 years since the boundary decision was passed  and the crucial matter left unaddressed by all concerned.

No present-day writer can spare Isaias the blame of being the topmost culprit in independent Eritrea’s disastrous failure from becoming what it was expected to be at the end of that long-stretched struggle. Martin Plaut could not be an exception. He describes Isaias not only as “clever and manipulative” but also as one whose style of rule is “arbitrary, personal and ruthlessly repressive”. This  “towering figure who led his people to independence” was not ashamed to become the  “dictator “who now holds them in servitude”. Yet, to Plaut’s judgment, “his colleagues in the EPLF leadership must [also] take their share for the responsibility for the country’s predicament.”

Flight and its Consequences

After discussing the build up towards dictatorship and the economic failures in most sectors that rendered the country inhabitable, the book thoughtfully narrates the risks faced by those Eritreans, mostly young,  who take the fatal decision to  say bye-bye to home. To be appreciated most is Plaut’s ability to select and provide most essential facts that can be kept at one’s finger-tips about what happened and in what numbers to Eritrean victims of human traffickers in the Sinai, the Sudan, the Libyan desert, the Mediterranean Sea and others parts of the globe. The human traffickers included Eritrean top officials working collaboration with Sudanese counterparts in the dirty business.

Also given adequate coverage are diaspora Eritreans – both the old and new caseloads, and how much they contributed to the coffers of the regime as they did in liberation struggle days.  However, the book reassures that “the days of [Eritrean diaspora’s] unequivocal support for the regime are over”.  However, the long-arm’ of the regime is still reaching many of the diaspora communities, including those 200,000 Eritrean-Americans in today’s Trumpland, who, by the way, were ordered to vote for this supposed new buddy of the dictatorial clique in Asmara. (And it is good to remember that Eritrea’s population was estimated at little less than 200,000 – equal to those Eritreans presently in America – when it was named ‘Italian colony of Eritrea’ in January 1890).

Naturally, the book discusses the problems in the diaspora opposition and concludes that old rifts of the liberation struggle years are still “standing on the way” of the much needed wider unity.  In the concluding parts of the book, Martin Plaut opines a number of possible scenarios for change in Eritrea, the most optimistic of which is an internal take-over by the army.

(This piece of writing was  initially aimed to be a much shorter thank you note to the author for making the effort to make Eritrea and its current situation better understood by readers.)

With warm greetings of the Holiday Season.

One thought on “‘Understanding Eritrea’ – a review”