Only someone who has themselves fled tyranny can truly grasp the significance of what the government has just done. The Home Office suggestion that refugees could have their permanent residency reviewed, and possibly revoked, after five years will send a shiver down the spine of anyone who has lived under dictatorship. 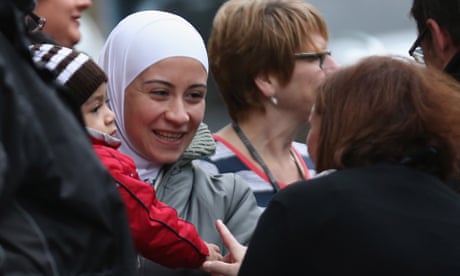 I remember all too well the enormous sense of relief I felt when I landed at Heathrow back in 1977. I had left South Africa after being active in the student movement following the Soweto uprising, and working to relaunch the non-racial trade union movement. Walking through Hyde Park with the grass beneath my feet and the wind in my face, an enormous weight had suddenly been lifted from me. The arrest and banning of my friends, the bugging of my phone, the notes on my car, the imminent threat of detention – all were suddenly gone. And like so many before me, I used my time to study, build a life and find a home.

There is nothing special about my story. I wasn’t in very much danger when I flew out of Cape Town. But it was that sense of abiding freedom that allowed me to stay. How many others would have had similar feelings – whether they were Huguenot weavers fleeing religious persecution in 17th-century France, German Jews in the 20th century or Eritreans today?

At a stroke the Home Office has undone what Britain has offered down the generations: a place of sanctuary and security and, above all, a permanent home for those fleeing persecution.

Imagine the case of a woman who left her country fearing that her family might subject her to female genital mutilation. Here she is, having broken ties with her relatives and those she might in other circumstances rely on. She has taken the plunge, crossed borders and subjected herself to all the hazards of being in the hands of human traffickers to make her way to Britain.

With a sigh of relief, and a huge feeling of gratitude, she might have finally been granted leave to remain. Yet now the threat that once seemed to have been lifted has been reimposed. She will know only too well that the clock is ticking. At a stroke of a pen she might be put back on a plane and sent back to all that she fears.

This is no idle threat. Charities are already warning that all that is needed is for a refugee to apply for a passport from their country of origin, or for a relative or dependent to return home, for the Home Office to act.

Ben Ward of Human Rights Watch points out that the Home Office is contravening the spirit, if not the letter, of the Refugee Convention 1951. “Under international law there is a responsibility to work for the integration of refugees into the host community, and this must have the opposite effect,” he says.

These measures come as the door for refugees is already closing. The case of Syrian refugees trapped in Turkey or Greece is well known. Less attention has been paid to the plight of people fleeing Eritrea, Nigeria and other parts of Africa for reasons ranging from persecution to war. The route via the Canary Islands or Spain has closed. Israel’s fence along the Sinai means that almost no one gets to Europe that way any longer. This has left Libya and, to a lesser extent, Egypt as the only exits. And even these are on the way to being shut.

Britain, along with the rest of the European Union, is effectively implementing a version of the system pioneered by Australia, where in 2001 refugees arriving by boat began to be outsourced to detention camps including that on the Pacific island of Nauru. Would-be travellers to Europe are increasingly being prevented from leaving Libya and instead becoming trapped in camps there. Some camps are controlled by Libya’s fragile government, others by Islamic State.

The UN’s children’s agency, Unicef, published details last month of just how terrifying these camps are. No one is under any illusion about the fate of prisoners held in these pits of despair.

Yet even if they escape – even if they make the long and dangerous journey through Italy and France, and finally make it to Britain – they cannot now know that they will have found a permanent sanctuary. To suggest that the Home Office regulations are heartless doesn’t even come close. They are a sword of Damocles hanging over the heads of the most vulnerable members of our community.