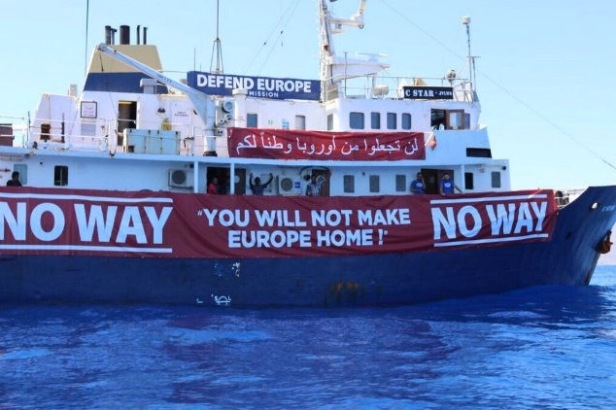 How Leave.EU threw its backing behind a far-right anti-migrant boat

As the Italian navy enters Libyan territorial waters for the first time, they are joined by strange allies: Europe’s far right.

Sign up for our weekly email *
By Martin Plaut
Source: New Statesman

The Italian government has begun what it describes as a “limited naval” mission to help Libya’s coastguard curb migrant flows.

“(We will) provide logistical, technical and operational support for Libyan naval vessels, helping them and supporting them in shared and coordinated actions,” defence minister Roberta Pinotti said ahead of Wednesday’s parliamentary vote authorising the operation.

“There will be no harm done or slight given to Libyan sovereignty, because, if anything, our aim is to strengthen Libyan sovereignty,” she told parliament, stressing that Italy had no intention of imposing a blockade on Libya’s coast.

Some Libyans reject the Italian initiative, arguing that it is an infringement of their country’s rights. General Khalifa Haftar, who controls most of eastern Libya, threatened to use his own forces to repel the Italians if they enter Libyan waters.

The Italian government is facing mounting criticism at home for allowing tens of thousands of Africans to arrive on its shores. This year year more than 95,000 have landed, according to the UN’s refugee agency. A further 2,385 have lost their lives or gone missing.

Italian attempts to curb the African exodus now has the support of the European far right. Members of the “Identitarian movement” have sent their own ship into the Mediterranean with the explicit aim of returning Africans to Libya.

Defend Europe has raised over $180,000 to support their mission to intercept the refugees on the high seas. They accuse the rescue missions of organisations like Médecins Sans Frontières and Save the Children of working with traffickers, and see the NGO’s as their targets.

Defend Europe is explicit about its aims: “Our goal is to document the doings of the NGOs, expose their collaboration with the human smugglers, and intervene if they do something illegal. Our goal is to step in where our politicians are failing and to do what is necessary to stop the deadly illegal migration into Europe.”

Their work has been backed by several far-right organisations, including fringe groups operating in the UK. This includes Generation Identity UK, whose mission is “the preservation of our ethno-cultural heritage”.

“The Defend Europe project has been funded by the international far-right and this no doubt includes UK far-right activists,” said Dr Joe Mulhall, Senior Researcher at the campaign group Hope not Hate.

“However, most worrying is the encouragement being shown by Leave.EU, the pro-Brexit campaign run by former Ukip donor Arron Banks, who has the influence and resources to significantly support the dangerous Defend Europe mission should he choose to,” said Dr Mulhall.

The backing of Arron Banks is certainly a boost for Defend Europe. Leave.EU has produced a video lauding the work of Defend Europe, saying that they “are doing some valuable work in raising awareness of ongoing crisis in the Med and the alarming role NGOs are playing.”

Defend Europe’s boat – the CStar – is now off the Libyan coast. Exactly what it will do is unclear.

The organisation intercepted an MSF boat leaving the Italian port of Catania in May. “They tried to halt us, but were intercepted by the Italian coastguards, interrogated and released,” MSF humanitarian co-ordinator Hassiba Hadj Sahraoui, told the New Statesman. “We don’t want to engage with them: people are dying. Rescuing them – that’s our mission.”

But the operations of CStar are little more than a distraction for the international rescue effort. Italy has introduced a code of conduct for the NGO’s rescuing the migrants off the Libyan coast.

A number of the rescue missions refused to sign – including MSF. The code banned the transfer of survivors from one ship to another – insisting instead that the ship disembark them at a port.

“We refused to sign because it would decrease the number of rescue vessels at sea at any time,” explained Sahraoui,. MSF also rejected plans to station armed police on board the boats, arguing that this would compromise their neutrality.

One of the eight humanitarian vessels operating in the Mediterranean has already been impounded by the Italian authorities. The Iuventa, a boat operated by German NGO Jugend Rettet, was impounded on the Italian island of Lampedusa.

“This looks like a reprisal,” says Ms Sahraoui. “The Italians are using administrative measures to try to halt the rescue operations, despite insisting that the code of conduct is voluntary.”

The Royal Navy is also involved in the maelstrom off the Libyan coast, as part of Operation Sophia, run from Rome. Their mandate has just been updated, and now includes training the Libyan coastguard.

But the Libyan coastguard has a poor reputation.

MSF says it has evidence that the Libyans use force, including firearms, to escort any migrants back to their shores. Once in Libya they will be sent to the country’s notorious detention camps, where thousands of men, women and children are left to rot with little hope of ever making it to Europe.