Just in case you were wondering why President Jacob Zuma was in such a hurry to reshuffle his cabinet, you need look no further than the multibillion-dollar nuclear power deal he signed with Russia.

Now he needs to deliver, and President Putin is not someone to cross – so Zuma has now (apparently) delivered the heads of obstructive ministers.

Several ministers were removed or transferred to new departments in the reshuffle – including David Mahlobo being made the new minister of energy.

According to the Sunday Times, Putin’s team told Zuma to “speed up and conclude a multibillion-dollar nuclear deal with Russia”.

Hours after the meeting, the cabinet reshuffle took place.

“Their visit was to deliver what many of us believe to be the final warning to the South African authorities. This group does not normally leave Russia. These are members of the military, the police, and the intelligence,” a source told the newspaper.

“Mahlobo was chosen by the Russians.”

The report stated that Mahlobo was chosen by the Russians after Zuma indicated he wanted Faith Muthambi for the energy job.

The Russians convinced Zuma to consider Mahlobo for the position – which was given to him without the approval of the ANC top six.

Several ANC members have warned that the move could destabilise the government and South Africa.

“South Africa recognises the role of nuclear power in ensuring security of energy supply and meeting the challenge of climate change,” he said.

“South Africa has made a policy decision to pursue nuclear energy as part of the energy mix.” 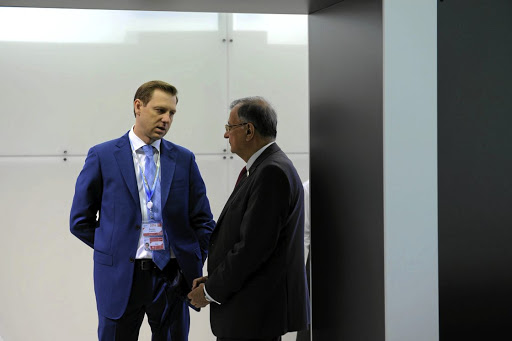 Rosgeologia holds a small share of the Russian market for seismic and geophysical services; its margin for profit, according to the state auditor, is just above breakeven. Yet Rosgeo, as it is known, announced in September what should be a new record for Russian state investment in SA, drilling six wells into the seabed off the South African coast at a cost of almost $400m, earning the right to sell billions of dollars in gas.

When they met hours later at the Brics summit in China, President Vladimir Putin and President Jacob Zuma ignored the deal. The three top officials of Rosgeo refuse to explain the contract. When one of them, Rosgeo CE Roman Panov, spoke at length about his company’s prospects in an interview with a Moscow newspaper, the South African offshore oil and gas project wasn’t mentioned.

The reason, Moscow sources say, is that they are sceptical that Rosgeo has the resources to implement the deal or that the Russian state banks will accept the risk of South African default. The reason for that, the sources add, is that they believe the Zuma administration is too politically weak and unstable and there is too little time left in Zuma’s mandate to implement the project.

South African allegations of the involvement in the Rosgeo deal of a Zuma family member and political allies of the president who visited Rosgeo in Moscow recently, threaten to expose the terms of the still secret contract with PetroSA to a court challenge for violations of the Constitution. That, and associated statutes laws on the management of public money, require the Rosgeo-PetroSA deal to be “in accordance with a system which is fair, equitable, transparent, competitive and cost-effective“.

Scepticism about this has already been hinted at in a ruling by the High Court in Cape Town on September 22.

The refusal of Rosgeo, Russian state banks and PetroSA to answer questions about the deal indicates their fear that it will not survive the transparency test. According to the PetroSA announcement, the agreement with Rosgeo “will see about $400m invested in oil and gas development…. The agreement involves the development in the exploration areas of blocks 9 and 11A off the south coast of SA…. The project envisages extraction of up to 4-million cubic metres of gas daily. This will subsequently be delivered to PetroSA’s gas-to-liquids refinery in Mossel Bay”.

PetroSA board acting chairman Nhlanhla Gumede said: “A find in block 9 and 11A would result in much-desired exploration activity of our onshore and offshore oil and gas potential. The country and PetroSA will benefit greatly from the find.” This is misleading — the oil and gas in the two blocks has already been found.

Rosgeo said in its news release that blocks 9 and 11A had already been explored and that PetroSA had significant data on the reserves waiting to be lifted and piped ashore. According to Rosgeo, “reserves of oil are estimated over 50-million tonnes; gas [reserves] over 400-billion cubic metres, expected resources of gas amount to 1.2-trillion cubic metres”.

PetroSA is too broke to exploit this treasure. With mounting financial losses, its management has been replaced by Zuma’s people, its board of directors sacked and effective control of the company taken over by the Central Energy Fund, a state entity much closer to Zuma and to his political and business advisers.

Due to this situation, PetroSA is too much of a risk for local or international banks to extend new loans.

Gumede was appointed in July, weeks before the contract signing in China. He answers to Central Energy Fund director Luvo Makasi, a 32-year-old appointed in December.

PetroSA’s acting CE, Kholly Zono, was barred by Makasi from going to China to sign the Rosgeo deal. Nor did he accompany Makasi and State Security Minister David Mahlobo when they visited Moscow in August. Makasi and two other men politically connected to Zuma met Rosgeo in August.

The three top Rosgeo executives — Panov, Ruslan Gorring and Sergey Suchkov — have unusual backgrounds for running a geological research business. All three were trained at military institutions and have lengthy military service and foreign postings. Panov got experience in Southern Africa between 2011 and 2013, when he worked for Norilsk Nickel’s investments in nickel mining in Botswana and SA.

When Rosgeo finalised its bid to PetroSA in 2016, it estimated the total capital expenditure on the project at $350m-$400m. Oilfield experts say that to protect such an outlay, recover costs and earn a profit, Rosgeo would require PetroSA to accept terms of sale for the gas it would pipe into the Mossel Bay refinery. PetroSA would be expected, the experts add, to fix a formula for pricing the gas so that it would not pay more than the prevailing market price. Rosgeo would bargain for a sufficiently high price to allow it to recoup its costs as swiftly as possible.

Zuma and Putin — two peas in a pillaged pod

Patronage and manipulation have served leaders well as they cling onto power while plundering their countries, writes Dumile Sibindana
Opinion
16 days ago

This appears to be a favour for the Russians unless there was a comparable bid for the same project.

PetroSA claims there was a rival bidder, but no details have been disclosed beyond a media report of a Nigerian company in the running.

Unless there was competitive bidding for the agreement about block 9 and block 11A, the Rosgeo agreement is likely to face a high court challenge.

PetroSA cannot afford to pay for the project. It proposed that Rosgeo take 65% of the equity in the project but pay all the capital costs to start up gas production and deliveries to shore.

Rosgeo insisted on 70%, and a stake of 35% has been promised to a black economic empowerment (BEE) entity created for the project. That BEE partner will receive its stake without making a capital contribution to the deal and earn a 35% royalty on the value of the gas Rosgeo expects to lift and sell. An adopted member of the Zuma family is involved in the negotiations with Rosgeo to become the 35% partner, according to sources in the energy ministry. Her name has not been disclosed.

The secrecy about the deal was partially lifted a month ago when the High Court in Cape Town ruled on a matter brought by two former PetroSA directors, claiming that their removal by Makasi earlier in 2017 had been illegal.

They accused Makasi and other government officials of putting pressure on PetroSA to accept Rosgeo’s terms without the required public finance management compliance and competitive bidding. William Steenkamp and Owen Tobias alleged that outside pressure in favour of the Rosgeo deal had led to their ousting from the board.

In a high court judgment earlier in 2017, Judge Lee Bozalek ruled that Zuma and his officials had shown unlawful favouritism, but he dismissed their application as he ruled Steenkamp and Tobias had not been fired unlawfully.

He conceded that there may have been unlawful intrigue in the Rosgeo-PetroSA deal, but decided against making the evidence public.

5 thoughts on “The Zuma – Putin connection”