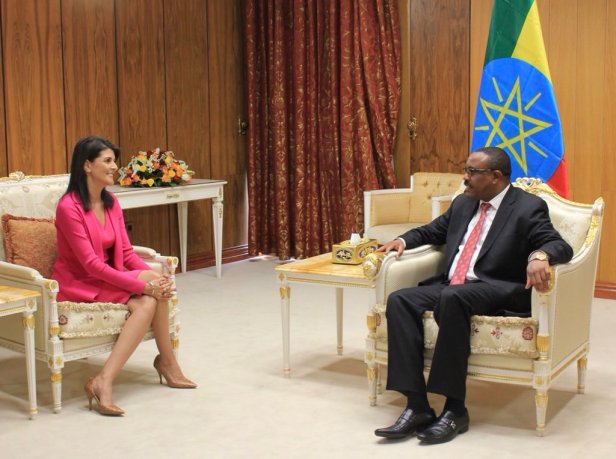 The US ambassador to the UN, Nikki Haley, is in Addis Ababa, on her first official mission to Africa.

It is an important opportunity for her and for her African contacts. She has already met  Ethiopian Prime Minister, Hailemariam Desalegn and Minata Samate Cessouma, the African Union Commissioner for Political Affairs.

Her talks with Samate were interesting – including discussions about Somalia, with Haley expressing support for the work of the African Union Mission in Somalia (AMISOM).

From Addis she is due to fly to Gambella, in western Ethiopia, where she will see the work of the UN and Ethiopia in caring for South Sudanese refugees who have poured across the border.

For Nikki Haley this could be a real wake-up call. Seeing at first hand the immense poverty and hardship that some 350,000 people are living is likely to be an unforgettable experience.

After Ethiopia come visits to South Sudan itself, and meetings with Salva Kiir before going on to the Democratic Republic of Congo for discussions with President Joseph Kabila.

Both these visits hold out immense challenges. Salva Kiir is fighting a civil war, while President Kabila’s term in office expired nearly a year ago.

Both leaders are hanging on to power for all they are worth. What can Nikki Haley possibly offer them, or threaten them with, that could see either man change his strategy?

Yet Haley is not a woman to be underestimated.

As a perceptive portrait of her in Politico put it: “The former South Carolina governor has quickly emerged as the security blanket that Republicans and even some Democrats—not to mention America’s allies—can cling to when trying to grasp where the Trump administration stands on global affairs. Haley is not only pro-America, pro-Israel and tough on terrorism—she’s also wary of Russia and attuned to human rights concerns.”

The UN ambassador is seen as the acceptable face of the Trump administration to the world.

She is also being talked about as a possible replacement for the US Secretary of State, Rex Tillerson. And Nikki Haley could have presidential ambitions of her own.

All of which means she needs to come up with something to show for her African safari. 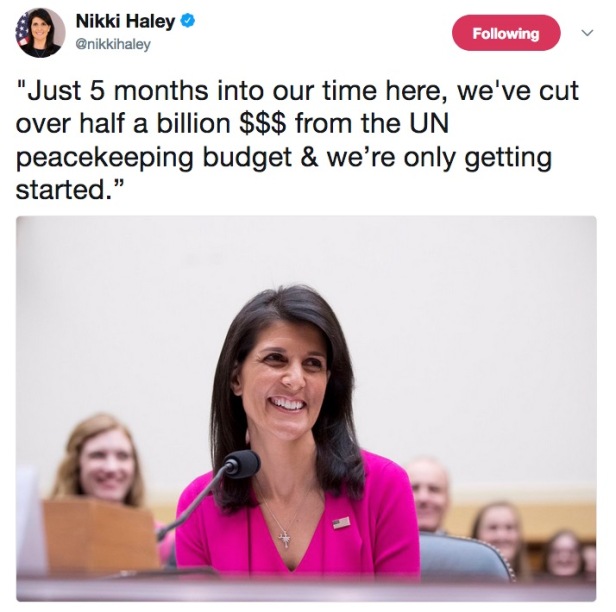 This was before she saw the immense problems the UN military machine has on the ground. Perhaps this will alter her perception of just how hard their task really is.

If her Africa trip does nothing else, it will have been well worthwhile.

One thought on “Can Nikki Haley – Trump’s UN Ambassador – pull an African rabbit out of her hat?”