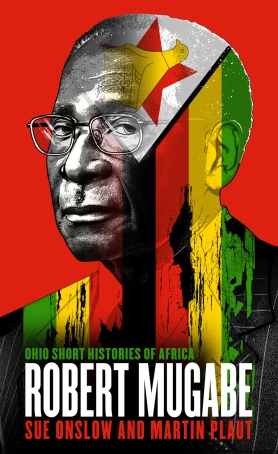 You can have a copy of this brand new biography of Zimbabwe’s first President at the 30% discount (£7.69) when you order using code CSF318RMUG

As man and leader he has come to embody the contradictions of his country’s history and political culture: as a symbol of African liberation, he remains respected and revered by many on the African continent, but this heroic status contrasts sharply, in the eyes of his detractors, with repeated cycles of gross human rights violations, capital flight, and mass emigration precipitated by the policies of his government and his demonic image in Western media.

In this timely biography, intended for a general audience, Sue Onslow and Martin Plaut explain Mugabe’s formative experiences as a child and young man; his role as an admired Afro-nationalist leader in the struggle against white settler rule; and his evolution into a political manipulator and survivalist. They also address the emergence of political opposition to his leadership and the uneasy period of coalition government. Ultimately, they reveal the complexity of the man who led Zimbabwe for its first four decades of independence.

Sue Onslowis Deputy Director of the Institute of Commonwealth Studies, School of Advanced Study at the University of London. She has written widely on British foreign policy and decolonization, and southern Africa in the Cold War era.

Martin Plautis Senior Research Fellow at the Institute of Commonwealth Studies, School of Advanced Study at the University of London. He was Africa editor, BBC World Service News, until 2013. He has since published three books on South Africa and Eritrea, including Promise and Despair: The First Struggle for a Non-Racial South Africa.He has advised the UK Foreign Office and the US State Department on African affairs.

In this sober biography of one of Africa’s longest-serving presidents, Onslow and Plaut provide a brief but comprehensive overview of a controversial leader who’s largely reviled in the West but often revered in Africa. The book traces Robert Mugabe’s evolution from freedom fighter in the 1960s and 1970s—including his leadership in the Zimbabwe African National Union, one of two main liberation movements fighting the white minority regime in Rhodesia—to his succession as prime minister at independence in 1980 and, later, president. The authors don’t shy away from discussing his worst choices—including the brutal suppression of 1980s opposition movement Zimbabwe African People’s Union; the harassment and intimidation of members of the Movement for Democratic Change party during the 2002, 2008, and 2013 elections; the disastrous intervention in the Second Congo War from 1998 to 2003, at a cost to the country of one billion dollars and many lives; and the Fast Track Land Reform program, the state-sanctioned violent acquisition of white-owned farms by supposed war veterans (many of whom were unemployed urban youths too young to have actually fought)—but don’t vilify him. Written in lucid prose, the informative book is commendable for its balanced assessment of 37 years’ worth of very tumultuous events. (Apr.)