Who now remembers the islands of Diego Garcia? The Chagossians – the people who once lived on them – certainly do, even though they have been in exile for years.

Expelled by the British in the 1960’s before the islands became an American base, they have campaigned for the right to return ever since.

On Monday 25th the International Court of Justice will deliver it’s preliminary judgement.

Below is a legal commentary on the case.

Anticipating the Chagos Advisory Opinion: The Forgotten History of the UK’s Invocation of the Right to Self-Determination for the Sudan in the 1940s

What does 2019 have in store for international law? Little seems predictable, but 2019 is likely to be the year in which the International Court of Justice will for the first time in two decades pronounce on the law of self-determination. In the Kosovo Advisory Opinion, the ICJ managed to sail around this spiky fundamental concept of international law, but it will be harder to avoid in the advisory proceedings on the Legal Consequences of the Separation of the Chagos Archipelago from Mauritius. This case puts self-determination front and centre.

However, legal historiography has thus far omitted a case that suggests that self-determination was imbued with legal meaning, by Great Britain itself, at an earlier stage, namely in the 1940s. Our forthcoming article in the British Yearbook of International Law shows that during the UN Security Council’s second year of operation, in 1947, the UK invoked the right of self-determination of another people, the Sudanese, as their legal entitlement, in its effort to counter Egyptian claims on the Sudan. While others have written brilliant histories of how the Sudan emerged into statehood, our article aims to restore the Sudan case to the legal history of self-determination, including the UK’s role in this. Thus, even if popular historical imagination envisages self-determination as a revolutionary ideal championed by the colonized but denied by the colonizers, in the case of the Sudan, the British propagated the Sudanese right to self-determination, albeit, as we argue, as an emanation of, not a deviation from, their own colonial predispositions.

In order to understand how it happened that in the late 1940s one of the world’s most significant colonial powers advocated for the right of self-determination of a people that it governed, we look at the individuals and historical circumstances that drove this development. Britain had officially co-administered the Sudan with Egypt since 1899, having earlier invaded the Sudan to restore Egyptian rule. De facto, the Sudan was governed by a small group of British administrators, known as the ‘Sudan Government’. On the basis of extensive archival research, the forthcoming article shows how the British-staffed ‘Sudan Government’, rejected self-determination demands from the Sudanese themselves, while at the same time trying to convince Whitehall of the importance of Sudanese self-determination, citing the Atlantic Charter, in order to keep Egypt out of the Sudan. In light of increasing demands for self-determination, they argued that Britain had to promote the ‘right’ type of nationalism in the Sudan: a nationalism that was in favour of Britain and opposed to Egypt.

Eventually, when the Egyptians tried to reassert their sovereignty over the Sudan after World War II, the British Government took up the self-determination idea promoted by the British-staffed Sudan Government and argued that the Sudanese people ought to be consulted on any potential change to their status. Justifying the UK’s position in his exchanges with the Egyptian Prime Minister, Britain’s Secretary of State for Foreign Affairs, Ernest Bevin, argued that the Sudanese were entitled to self-determination, ‘a fundamental right under the United Nations Charter’. With the negotiations on revising the 1936 Anglo-Egyptian Treaty of Alliance reaching a deadlock over the Sudan issue, the Egyptians referred the matter of Britain’s continued presence in Egypt and the Sudan to the UN Security Council in July 1947.

Britain’s UN representative, Sir Alexander Cadogan, received legal advice from the Foreign Office to insist on the right of self-determination in the face of any Egyptian claim. And indeed, in the Security Council debates, Cadogan summarized Britain’s position as ‘fighting for the Sudan’s full right of self-determination’, a stance that His Majesty’s Government ‘fe[lt] obliged to maintain’, being ‘the only policy consistent justice’ and ‘the only policy consistent with the spirit of the United Nations Charter’. As self-determination started to be invoked more often against the UK, the Foreign and Colonial Office began to develop arguments as to why it could not be applied as generally as the UK itself had argued it should be in the Sudan case. Just as it had successfully managed to popularize the notion that the Sudan was a ‘condominium’ (even though its 1899 Agreement with Egypt on the administration of the Sudan made no mention of joint sovereignty), Britain was very effective in hiding its remarkable role in promoting the right to self-determination in the early days of the Charter. 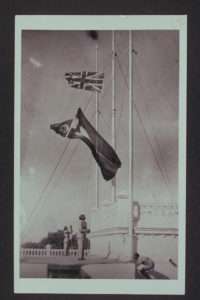 Image 1. Lowering of the British and Egyptian flags outside of the former Governor-General’s palace, at a ceremony to mark the independence of Sudan from Britain (Khartoum, 1956); G.F. Thomas collection, Sudan Archive Durham (SAD.747/8/15). Reproduced by permission of Durham University Library. 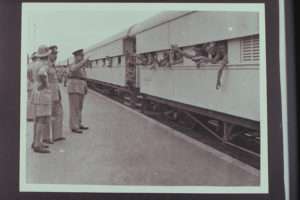 Moreover, the fact that this early practice emanated from the UK casts additional shadows over the UK’s arguments in the current advisory proceedings that it had ‘consistently, throughout the 1950s and the 1960s, objected to references of a “right” of self-determination’. (It also made a more specific claim that it had consistently objected to a rule of territorial integrity of self-determination units, which our article does not specifically address. The article does show, however, that Egypt objected to Britain’s separate governance structure for north and south Sudan on the basis that it threatened the Sudan’s ‘territorial integrity’). If the UK’s general claim with respect to the right of self-determination is understood as amounting to a persistent-objector line of defence (and both the literature as well as the response by Mauritius support that interpretation of the UK’s claim), then the Sudan case calls into question the ‘consistency’ of that objection. Mauritius has already challenged that claim with reference to some UK practice in the 1950s and 1960s. This article shows that even if the UK was consistently objecting to self-determination as a legal right in the 1950s and 1960s, it could do so only by deviating from its own arguments on self-determination developed and espoused in the Sudan case in the 1940s.