She was attacked by the apartheid government, for standing up to racism. Then the ANC and its allies attacked her for refusing to bend to their policies, which favour identity politics.

But seldom has she been so vilified as by the former editor of the Mail & Guardian, Chris Roper. This article charts what took place and puts it in context.

Source: Politicsweb.
The Ratcatcher writes on the FM columnist’s attack on Helen Zille as a “carnival barker” of this odious movement
The Financial Mail recently published a long feature article by the former M&G Editor-in-Chief, Chris Roper, suggesting that DA Federal Council Chairperson, Helen Zille, was a “greater threat” to South African democracy than the EFF’s Julius Malema. In his piece Roper described Zille as being “red-pilled” by the “alt right light” and as being a “carnival barker in the alt-right carnival of misinformation”.This is a very ugly claim as the “alt-right”, which briefly rose to prominence in the United States during Donald Trump’s presidential candidacy in 2015/16, is an utterly vile political movement. Though it had its fellow travellers and apologists at the time – most notably Milo Yiannopoulos at Steve Bannon’s Breitbart News – it has long been completely exposed and discredited as a far-right neo-Nazi operation. At its core was a vicious troll army that targeted conservative Jewish and other critics of Trump, like Ben Shapiro and Jonah Goldberg, often with grotesque holocaust invoking memes.Examining the language, ideas and behaviour of the alt-right is less fun than exploring a cesspit but fortunately there was one incident that pretty much sums up them and their world view in its entirety. On 17 September 2015 the conservative journalist David French had posted an item on the National Review weblog, the Corner, calling out the commentator Ann Coulter, a Donald Trump ally, for mimicking the white-nationalist language and rhetoric of the alt-right. As he later described the response:

“Within minutes, the tweets came flooding in. My youngest daughter is African American, adopted from Ethiopia, and in alt-right circles that’s an unforgivable sin. It’s called ‘race-cucking’ or ‘raising the enemy.’ I saw images of my daughter’s face in gas chambers, with a smiling Trump in a Nazi uniform preparing to press a button and kill her.”

This is all you really need to know about this noxious American intellectual effusion: The alt-right then was, and is, a deeply racialist and anti-Semitic movement, notorious for mocking the mass murder of European Jewry, and which openly abhors all forms of inter-racial love, affection and interdependency.

Here it is important to fill in some lesser known background on Helen Zille’s family history, both past and present, that is relevant in the light of Roper’s poisonous allegation against her.

Zille’s mother, Mila, was the youngest of five children of Carl Maximilien Cosmann, a Jewish lawyer, and Emilie, his protestant wife. Mila was born in Essen in 1919 and so was 14 in 1933 when the NSDAP of Adolf Hitler came to power. Cosmann was able to move his other children out of Germany but Mila, defined as a Mischling ersten Grades by the Nuremberg laws, was kept at home. As Zille writes in her autobiography, “shunned by former friends at her predominantly Lutheran school, and barred from all clubs and societies, she begged to be sent to boarding school outside of Germany. Her parents, unable to countenance life without any children, kept her at home.” Cossman decided they all had to leave after the family home, and a precious old cello, was invaded and smashed up by SA thugs in November 1938 and he was briefly detained. The family was able to get out of Germany, and to England, three weeks before the outbreak of World War Two.

Zille’s father Wolfgang was the son of Walter Zille, who was from a protestant family, and Helene, who came from a large Jewish family of 13 siblings, the ninth child of Hermann and Ernestine Marcus. Walter died in 1922 when Wolfgang was ten, and Wolfgang and his brother Heinrich were raised single-handedly by Helene in Rosslau, near Dessau, in what is today Saxony-Anhalt in Germany. In the late 1930s the two brothers emigrated to South Africa, were abIe to secure steady employment, and so were able to bring Helene out. She came over on the Windhuk in July 1939.

In her autobiography Zille describes visiting her grandmother’s tiny flat in Hillbrow, as a small child, where she was fascinated by a picture of Helene’s huge family.

“I would climb on the bed,…, take the photo off the wall, and ask Granny to go through their names. I was fascinated that she could remember them all, in order, starting with Fedor and ending with Fritz…. Fritz lived in London. I recall her saying that two sisters had gone to South America. Most of them, Granny said, had died. They died. From a child’s perspective, that is what old people do. I did not give it as a second thought.”

It was only much later that she learnt what had actually happened to those that “had died”. Of the thirteen children Fedor died long before World War Two. Fritz, Else, Mimi and Max were also able, like Helene, to flee continental Europe before the outbreak of the war– the latter three to South America. In strange, foreign lands they had to rebuild their lives from nothing. The others were not so fortunate.

Wolfgang Zille’s uncle, Paul Marcus, was the owner of Café Karema (Kaffee-Restaurant-Marcus) on the Marienstraße in Düsseldorf, Germany. During the late evening of the 9 November 1938 he was sitting in his office with his wife, Hedwig, when a gang of SS and SA thugs invaded the establishment throwing stones through the windows and smashing the place up. Paul went to the hallway to call the police but they refused to help. Hedwig meanwhile was assaulted and injured. She eventually made her way to a praxis, run by a Jewish doctor, on the Martin Luther Platz, where Paul joined her. The doctor though was not there however. This establishment too was invaded and vandalised by NSDAP thugs. 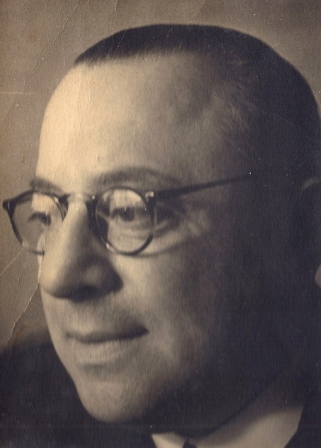 A short time later three black uniformed men came and screamed “Hande Hoch!”. They then opened fire. Paul Marcus was shot three times and killed instantly. Hedwig was shot in the stomach, with the bullet penetrating the lungs. She was found the next day by a cleaner lying unconscious in a pool of blood next to her dead husband. Hedwig and her son Hans were able to make their way to Palestine in 1939. The bullet was removed from her lungs in Tel Aviv. Paul Marcus then was one of the estimated 127 Jews murdered on Kristallnacht.

Another of the Marcus siblings, Antonia, married into the Gutmann family. Her daughter Erna in turn married Hermann Braunsberg, a successful industrialist who co-owned, with his brother Hugo, a textile factory in Frohburg, a town near Leipzig. Antonia Marcus was deported to the Theresienstadt ghetto on 13th July 1942. She survived a few months. Hermann Braunsberg was also deported to Theresienstadt in 1942, and then to Auschwitz in 1944 where he was murdered. Hermann and Erna’s son Heinz-Peter escaped Germany, as did Hugo, but not continental Europe. Following Germany’s conquest of Belgium and then France both were captured, held in the Drancy internment camp in Paris, and then deported to Auschwitz in 1942 where they too were killed. The Stolpersteine in Frohburg, commemorating the Braunsberg family, describe Erna only as “humiliated / disenfranchised. Dead Jan 1941”.

Another of Helene’s sisters, Klara, suffered a similar fate. Official German archives of the victims of national socialism list one Klara Homberger née Markus as having been deported on 10 May 1942 from Weimar-Leipzig to the transit ghetto in Belzyce, Poland. Klara’s son, Herbert Homberger, was deported to Auschwitz in 1943. He is listed as having been murdered on the 26th of August 1943.

In her autobiography Zille writes that she was not able to account for what happened to the other siblings: Karl, Bruno, Gertrude and Walter. The same online archives list a Bruno and Karl Marcus, both born in Dessau, as having been deported from Düsseldorf to the Minsk ghetto on 10 November 1941. One Gertrud Wolff née Marcus is listed as having been deported from Berlin to the Theresienstadt ghetto in July 1942 and then to the Treblinka extermination camp on 19th September 1942. There is no record in these archives however of a “Walter Marcus”. 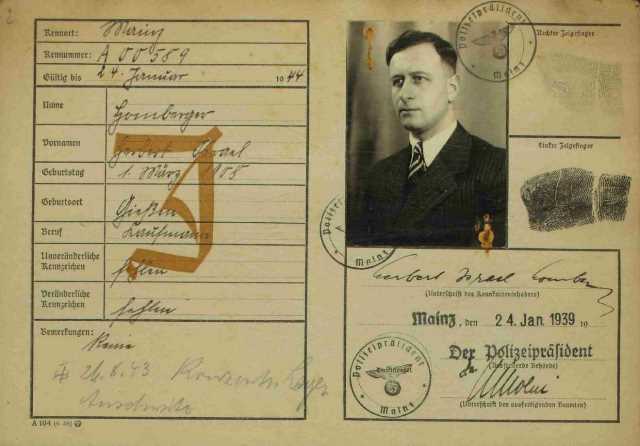 The identity document of Herbert Homberger, issued on 24 January 1939.

Today, Zille is the loving foster grandparent of two children, Chulumanco and NgoweNceba. This is well known, as one of the biggest press scandals of the Zille administration in the Western Cape was occasioned by Zille allowing her official residence, Leeuwenhof, to be used for a matric after party.

As the Weekend Argus reported in September 2018 “Zille confirmed yesterday that she had allowed her foster grandson, Chulumanco Mputing, who attends Rondebosch Boys High School, to host his matric farewell after-party at her home. Zille fostered the boy after his mother, Zille’s former housekeeper, died of cancer when he was still young. She confirmed to Weekend Argus that ‘the party this week was the after-party of the matric class of a young man that I have raised as my own son’.”

Best day of the year. Grandparents day at Rustenburg Junior with my beautiful NgoweNceba and her lovely friend Sisipho. 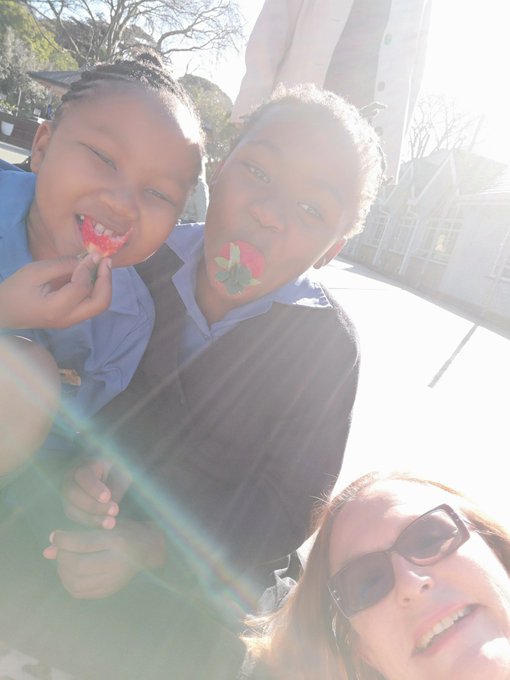 Gearing up for NgoweNceba’s 6th birthday party at Leeuwenhof. Big day for us all. 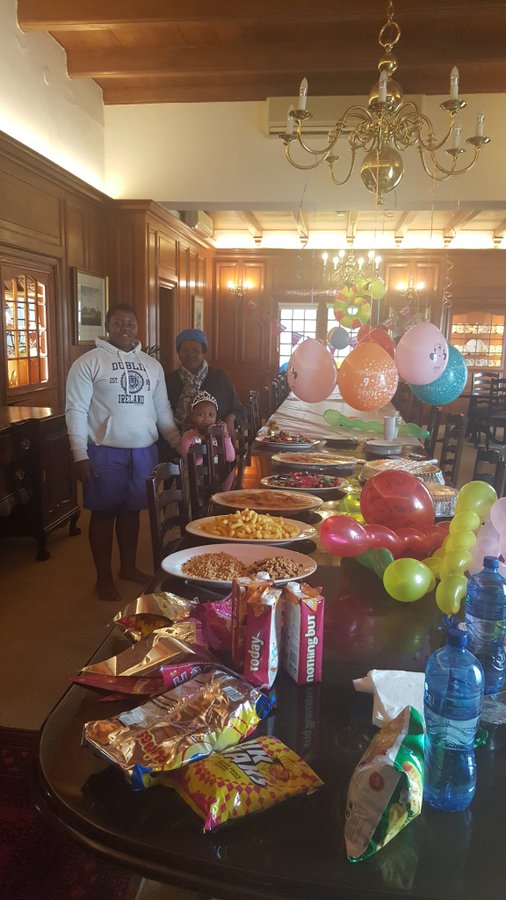 In these and other aspects of her biography Zille embodies, represents and articulates everything that the alt-right abhors. Roper produces nothing in his article that can conceivably be seen as linking Zille to this odious movement or its ideas. He applies the label anyway. This is vicious and dehumanising, not least because the alt-right is infamous for having targeted Jewish journalists, in America, with degrading “oven jokes” and Nazi-memes. As described above many of Wolfgang Zille’s uncles, aunts, and cousins, were killed in Nazi death camps.

To describe Helen Zille, of all people, as a “carnival barker” of such a movement breaches all boundaries of intellectual honesty and moral decency. It represents a remarkable failure of editorial judgment by the Financial Mail to have published such a smear.

2 thoughts on “South Africa: How Helen Zille has been smeared”