The African Union is best positioned to send peacekeepers to the continent’s various war zones. But it often lacks the funds available to the UN’s blue helmets. A compromise over co-financing peacekeeping missions would serve the conflict prevention goals of both institutions. 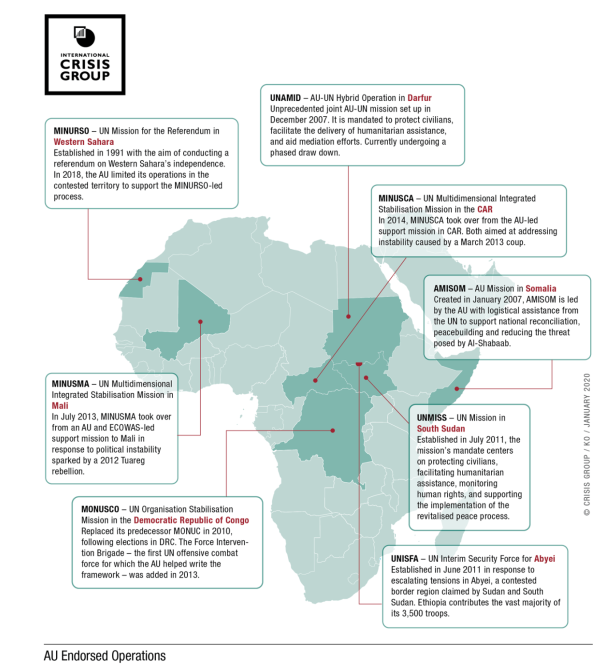 What’s new? Attempts to reach agreement upon a UN Security Council resolution on using UN assessed contributions to co-finance African Union (AU) peace support operations have ended acrimoniously, damaging relations between the Council and the AU Peace and Security Council. Discussions are now on hold, offering the parties an opportunity to clarify positions.

Why does it matter? Access to UN financing offers the hope of predictable and sustainable funding for vital AU peace operations, whose offensive mandates are often better suited to current conflict dynamics in Africa. An AU summit in February 2020 could determine if and how the proposal is pursued.

What should be done? The UN and AU should pursue a compromise. It could involve agreeing to treat AU troop contributions as in-kind payment, creating a joint mechanism for monitoring human rights compliance, and stipulating that a commander reporting to both institutions will lead co-financed missions.

A proposal to use UN assessed contributions as a means of providing sustainable and predictable financing for African Union (AU) peace support operations is perhaps the most contentious issue facing the two institutions. The Security Council’s attempts to agree on a resolution that would see a 25:75 funding split between the AU and UN for Council-authorised AU-led missions ended acrimoniously, threatening to taint relations with its AU counterpart, the Peace and Security Council (PSC). Central to the dispute are doubts about the AU’s ability to pay its share. Discussions are on hold until African leaders meet in February 2020 to decide if and how the AU will meet its obligation. The timeout presents a much needed opportunity for the AU to clarify key positions. UN member states need to do the same. They should then come back together and make the necessary compromises to get the proposal off the ground – an outcome that would serve both institutions and their common goals of conflict prevention, mitigation and resolution in Africa.

Since its founding in 2002, the AU has assumed greater responsibility for maintaining peace and security in Africa, including through peace support operations. Its ability and willingness to mount counter-terrorism and peace enforcement missions to help stabilise African countries confronting grave violence have become increasingly important in the face of rapidly changing conflict dynamics, especially given that such operations fall outside the scope of traditional UN peacekeeping. Resources, however, have been a challenge for Addis Ababa, which has generally needed to seek them on an ad hoc basis from non-UN donors or quickly shift missions wholesale to the UN, as it did in the cases of Mali (2013) and the Central African Republic (2014). Against this backdrop, the AU has repeatedly called on the UN to share the financial burden of its operations in support of peace and security on the continent.

The AU first sought the use of UN assessed contributions in 2007 for its mission in Sudan, which was on the verge of collapse due to a funding shortage. The idea eventually gained traction in 2015, after an internal AU decision cleared the way for negotiations over a proposal under which the AU would pay 25 per cent of the costs of Security Council-authorised missions and the UN would cover the rest through assessed contributions.

Those negotiations have since foundered, however, on three main issues. First, the parties have been unable to reach a clear understanding of how the 25:75 split will work in practice, especially regarding the AU’s ability to meet its financial obligations. Secondly, Security Council members continue to question whether AU missions financed through UN assessed contributions would comply with both international human rights law and the UN’s financial transparency and accountability standards. Finally, there are disputes about which institution should have overall force command. These issues are particularly important to the U.S. and the UK, which have indicated that they are unlikely to support the proposal until these problems have been resolved to their satisfaction.

The AU has made progress on a number of fronts. It has taken significant steps to ensure that the long dormant Peace Fund (the mechanism through which it plans to finance its 25 per cent) will soon be operational by requiring mandatory member states’ contributions and introducing a sanctions regime to deter and penalise defaulters. As a result, for the first time in its 27-year history, the fund has an endowment of over $100 million ($131 million), though it is still well short of its $400 million annual target.

Both the AU and the UN have hit the limits of what they can do on their own with their current tools for promoting peace and security in Africa.

The AU has also made advances on human rights compliance, drawing up a code of conduct, developing disciplinary processes and beginning to roll them out in existing missions. While some Security Council members think these advances do not go far enough, a lack of clear benchmarks for what constitutes sufficient progress has left many AU member states and officials feeling that the goal posts are continually shifting.

Negotiations between the Peace and Security Council (PSC) and the Security Council have been deeply divisive since late 2018, when Ethiopia tried to secure a resolution that would have made the in-principle decision to use assessed contributions for UN-authorised AU-led peace support operations. The U.S. threatened to veto the resolution on the grounds that the AU had not met the Council’s conditions on key contentious issues relating to funding, human rights compliance and financial governance. Efforts by French diplomats to broker a compromise split the consensus among the Council’s three African members (known as the A3). The majority of African states rejected the French initiative, leaving all sides angry and frustrated.

South African attempts to revive discussions in July 2019 fared no better. In concentrating efforts on securing U.S. buy-in to a new draft resolution, South Africa and the other A3 members failed to consult sufficiently with the PSC in Addis Ababa. Discussions at the AU had moved on, with some member states asking whether the Peace Fund would be best used to co-finance peace support missions with the UN or whether it should be spent principally on mediation and prevention. Some also questioned whether the AU should provide the full 25 per cent and suggested that the provision of troops be considered an in-kind contribution. Faced with these divisions and a draft that did not (and could not) address them, the PSC eventually pressed pause on the proceedings in order to give African leaders time to formulate a common position.

These developments have caused considerable consternation at the Security Council, with some members feeling that the AU is backtracking on its promise. To preserve inter-council relations, however, it is better to surface misunderstandings and misgivings now, before an arrangement is put in place, than to proceed with a deal that lacks key AU member support and therefore is likely both to fail and continue to cause friction. AU leaders should review the arrangement’s key elements, including the implications of meeting the 25 per cent commitment and the tradeoffs that could be involved (including that priorities like mediation and prevention may receive less funding). The Security Council’s member states ought in parallel to consider their own bottom lines, and whether they really want this deal to happen.

They should. Both the AU and the UN have hit the limits of what they can do on their own with their current tools for promoting peace and security in Africa, but together they have a fighting chance of breaking through those barriers. In the event that member states in both Addis Ababa and New York decide they want to get a deal done, the contours are not hard to imagine: the parties could negotiate a compromise that allows the AU to treat troop contributions as an in-kind payment toward the 25:75 burden sharing formula, recognises that some information about human rights compliance cannot be gathered until missions are under way, relies on the UN Fifth Committee to police financial governance, and expects force commanders to report to both organisations.

Such a deal is hardly perfect from either the UN or AU perspective, but the alternative would be to continue living with ad hoc arrangements that risk leaving critical peace and security needs in the continent unmet. That would be a bad result for regional stability and an unfortunate harbinger for UN-AU cooperation. There is a better way forward. The parties should summon the will to take it.