Lockdown: the panic in Cyril’s eyes

The president, renowned for his serenity, spoke of the possibility of “hundreds of thousands” of coronavirus infections, and plans to bring in the army to ensure the lockdown is enforced 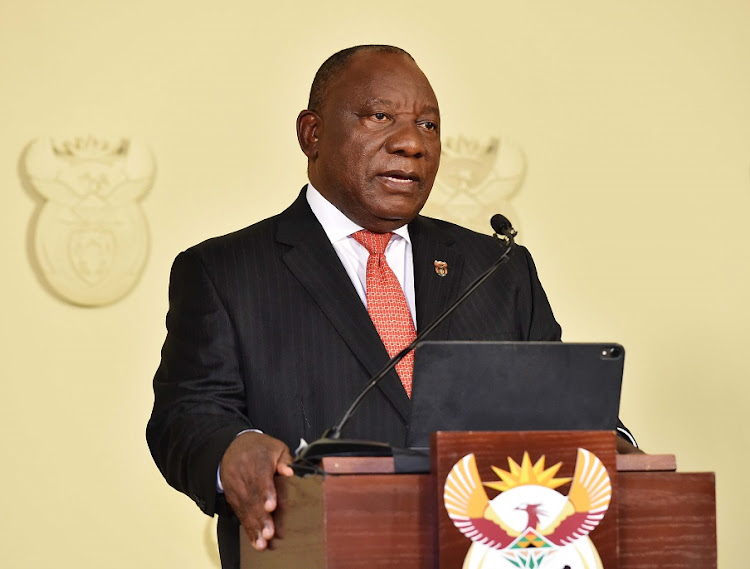 On Monday, when President Cyril Ramaphosa stood up to announce a 21-day national shutdown, there was panic in his eyes. The president, renowned for his serenity, spoke of the possibility of “hundreds of thousands” of coronavirus infections, and plans to bring in the army to ensure the lockdown is enforced.

Ramaphosa appeared presidential, and this crisis has strengthened his legitimacy. Even political rivals are backing him. It makes you shudder to imagine what would have happened had his predecessor been in charge: the Gupta-run VR Immunology would have scooped the tender for Covid-19 tests, appointments to the National Institute of Communicable Diseases would be decided in Saxonwold, and infection rates would be announced at a daily New Age breakfast.

But while Ramaphosa seems in control, this isn’t exactly true. Confirmed cases are rocketing — from 274, to 402, to 554 in three days — and there aren’t enough testing kits in the country, which means people don’t know if they’ve got Covid-19, and aren’t being stopped from spreading it. This is a problem since the evidence from South Korea suggests the one way to stem a pandemic is to test widely and ruthlessly. The lesson from South Korea, as The New York Times put it, is “swift action, widespread testing and contact tracing, and critical support from citizens”.

Testing is ramping up — it’s now 3,500 tests a day — but it’s behind the curve. Health minister Zweli Mkhize says he expects by mid-April, SA will be conducting 30,000 tests a day.

The question is whether the NICD, under-resourced and understaffed, can keep its hand on the pulse of the infections or whether it’ll be swamped. As it stands, SA is now at the stage where clusters of outbreaks are happening in the general population, and the growth is scary.

This is why Ramaphosa imposed a lockdown, even though it’ll strangle an economy already gasping for breath. You don’t want to be the president who (and here, we’re looking at you, Boris Johnson) carelessly sacrifices lives because you’ve got a mate in immunology who made a great case for “herd immunity” over a pint.

But if these are the challenges, it only becomes more imperative for Mkhize to improve his communication. He has an anxious population, so there can’t be days with no update on infections.

Last week, News24 reported that the government had effectively “gagged epidemiologists, virologists, infectious disease specialists and other experts on Covid-19”, instructing that all requests for comment should be directed to the NICD.

Oddly, the NICD denied this, saying it has “no authority” to make such a call — which shows how garbled the government’s messaging is.

The fact is, Mkhize’s spokesperson Lwazi Manzi had confirmed that “all communication should be centralised” to just a few people. This was the FM’s experience too, when we posed questions to Gauteng’s health department.

As Wits University’s Schalk Mouton says, if you gag the experts on virology, epidemiology and infectious diseases, you’ll inevitably get some crackpot pseudo-expert popping up to fill the space. “When you start gagging scientists in a time of disaster, you are going down a slippery slope. Who will be the next to get gagged?”

It’s an important question, especially as the army starts rolling into our suburbs, and a possible state of emergency looms. So far, Ramaphosa has acted as a statesman befitting his office. He realises what’s at stake. But he can’t afford to indulge the more autocratic-minded officials in his midst — or the crisis will become about so much more than Covid-19.

“If you break these laws, or regulations, you are six months in [jail] or fines or both. The police [with] support of SANDF, we are ready to make sure these things we talk about of complete non-movement will be implemented and will be implemented accordingly. For 21 days, please stay sober.”

It started somewhat differently when Co-operative Governance Minister Nkosazana Dlamini-Zuma, who’s responsible for the National State of Disaster regulations, emphasised the serious public health threat of Covid-19 and the rapid escalation of transmission.

“This lockdown is about protecting lives… The public will only be allowed to move when you buy food, medicine and go to see the doctor,” said Dlamini-Zuma. “Generally, you have to stay home.”

Or as the lockdown regulations in 11B put it:

“For the period of the lockdown every person is confined to his or her place of residence, unless strictly for the purpose of performing an essential service, obtaining an essential good or service, collecting a social grant or seeking emergency, life-saving or chronic medical attention.”

Gatherings are banned, except funerals, which are limited to 50 people. Night vigils are also a no-no.

Booze is banned with bottle stores, shebeens and taverns closed for 21 days from midnight on Thursday, and shops are limited to selling only essential goods.

Essential goods are defined in Appendix A of the lockdown regulations as food, including non-alcoholic beverages; sanitary products like toilet paper, soap and condoms; basic goods like electricity and airtime and fuel including coal and gas.

At Wednesday’s briefing by security ministers, it got murky at times in a way that highlighted if not necessarily divisions in Cabinet, then definitely mixed messaging.

Health Minister Zweli Mkhize briefly attended the briefing to publicly withdraw his comments earlier in the day that walking dogs and jogging would be okay, as long as it’s done in line with social distancing.

It was a win for the hawks.

“There shall be no walking of dogs that will be allowed,” said Cele.

Other inconsistencies emerged – and the potential for abuses and discretionary implementation.

But taxi services, like bus services, are permissible in Regulation 11C(1) “for purposes of rendering essential services, obtaining essential goods, seeking medical attention, funeral services and to receive payment of social grants”, with a cap of running at 50% carrying capacity. For example, two people, including the driver, in a four-seater or no more than seven passengers and the driver in a 16-seater taxi.

Transport Minister Fikile Mbalula emphasised the essential service taxis and buses would provide in getting essential workers to work and people from remote areas to grocery shops.

And limited hours are gazetted during which taxis and buses may perform this essential service: 5am to 9am and again from 4pm to 8pm.

“If you want to buy groceries and you stay in a remote area you will be catered for in the 5am to 9am [slot] and you’ll be catered for from 4pm to 8pm,” said Mbalula, adding later in the briefing:

E-hailing services like Uber or Taxify and metered taxis are also not allowed, unless they provide an essential service like getting people to grocery shopping and to doctors and hospitals in medical situations. The conditions are the same as for taxis and buses.

It’s unclear what would happen in a medical emergency at, say 1pm.

The way the regulations were drafted, including inconsistencies between Regulation 11 and Annex D, may give rise to challenges.

Trade and Industry Minister Ebrahim Patel made it clear courier services were deemed essential if they delivered “health products”. But there was no clear answer on whether grocery or take-away food deliveries by a courier would be permitted.

However, several ministers touted spaza shops as residents’ first port of call to get food.

“Spaza shops are allowed. You must buy nearest to where you are. You are charged to go to the nearest shop. You must be able to explain this if you should meet police on the way. It must be justified,” said Justice Minister Ronald Lamola.

In another inconsistency, nowhere do the regulations say residents may only shop at their nearest store, nor do regulations define what is nearest.

Perhaps the plug for spazas is a quick fix for government delivery to a sector which has long appealed to the government for support similar to Cele’s enthusiastic support for the booze ban to lower crime. As the police minister put it: “Rest assured there will be less crime. Rest assured that criminals will fall into the net…”

Or perhaps this plug for spaza shops is in recognition of the heavy economic impact of the 21-day lockdown on some of South Africa’s most vulnerable and working poor.

Hawkers, the self-employed and those scratching a living together, like rubbish collectors and recyclers, remain out of the loop of the economic support measures, from debt relief and resilience funds for small businesses to a R500 tax break for those earning less than R6,500 a month.

The regulations as they are drafted, alongside available ministerial directives, seem to allow for loopholes – to be exploited by some, or abused by those who now may stop and question South Africans to decide whether they are really going to the grocery store, the pharmacy of the doctor.

“When the regulations are implemented, there no doubt will be teething problems. It will be monitored by the NatJoints [the National Joint Operational and Intelligence Structure of bringing together police, the military, intelligence and others]. Nothing is cast in stone,” said Mbalula.

The lockdown regulations potentially go further than even State of Emergency measures permitted in the Constitution by indemnifying the state against any claim of compensation.

Section 37(5) of the Constitution ensures, “No Act of Parliament that authorises a declaration of a State of Emergency and no legislation enacted or other action taken in consequence of a declaration may permit or authorise (a) indemnifying the state, or any person, in respect of any unlawful act…” or the derogation of rights that remain regardless of any State of Emergency-related limitations. For example, the constitutionally guaranteed rights to human dignity and life remain in force entirely – even in a State of Emergency.

But in the lockdown rules, Regulation 11E offers wholesale indemnity for police, soldiers and peace officers like metro and traffic police, collectively defined as enforcement officers.

“No person is entitled to compensation for any loss or damage arising out of any bona fide act or omission by an enforcement officer under these regulations.”

It remains to be seen how this will play out.

And while Defence Minister Nosiviwe Mapisa-Nqakula said mobilising soldiers – they’ll go on foot patrols and guard mass distribution depots – was not a show of force by the government, the possibility of exactly that, a show of force, was not ruled out.

“It will only be skop, skiet and donder [kick, shoot and beat] when circumstances determine that. For now, we’re a constitutional democracy…” she said. (For now… – Ed)

But if South Africa nips the Covid-19 public health emergency in the bud, it will not necessarily be because of the government – and definitely not because of police kragdadigheid – but because of South Africans themselves, their kindness, grace, perseverance – and social solidarity