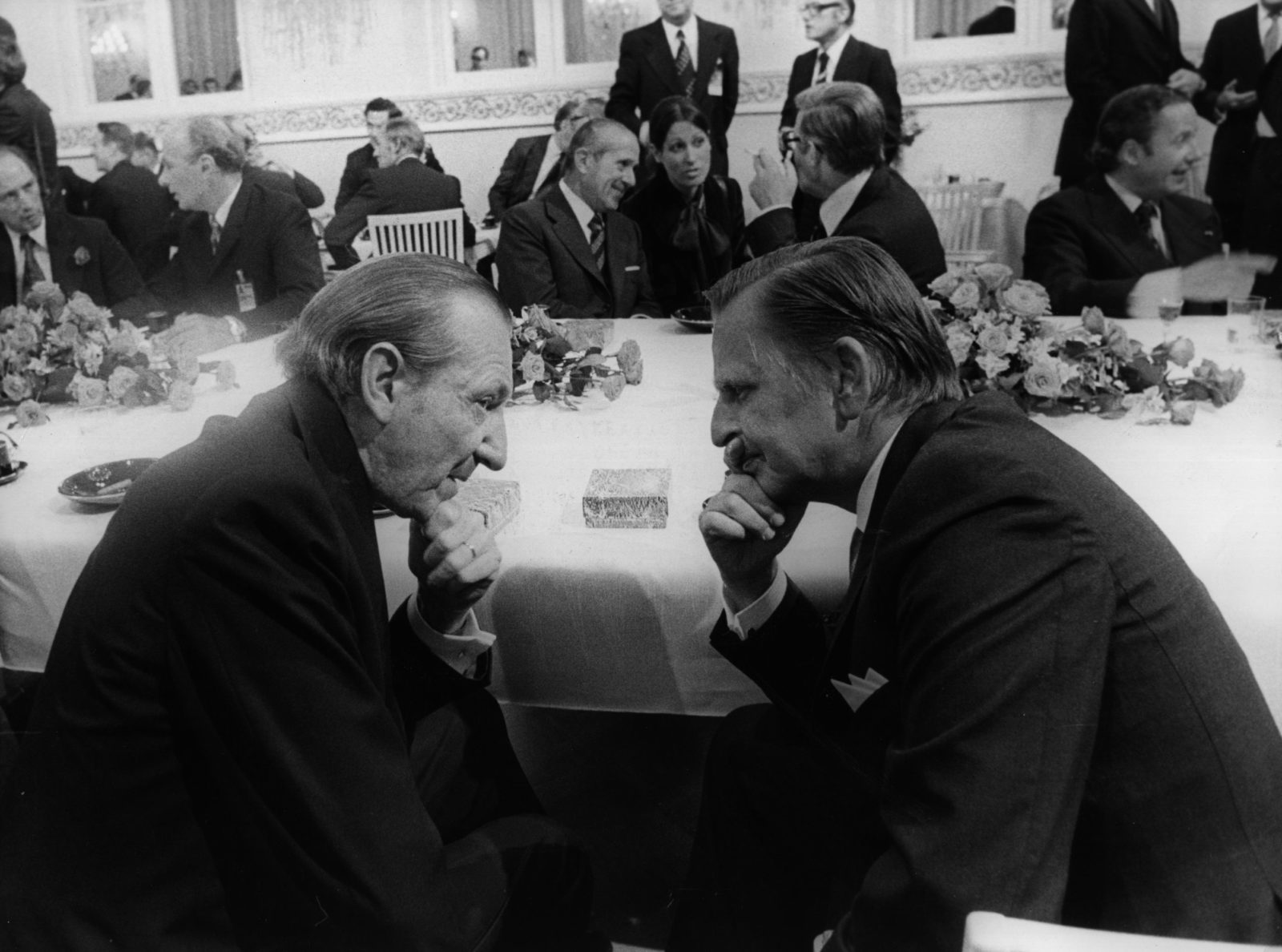 On the right, Swedish Prime Minister Olof Palme converses with Kurt Waldheim, Secretary-General of the United Nations at a meeting in Finland in January 1980. (Photo by Keystone/Getty Images)  Less

The Swedish police and prosecution authorities on Tuesday closed their 34-year investigation into the 1986 assassination of Prime Minister Olof Palme. In the process, they named one prime suspect and noted that ‘there was not enough evidence’ of a South African connection to the killing. However, this is unlikely to put an end to the speculation about a South African connection since there are so many unanswered questions and so many loose ends.

South Africa lies at the centre of many unanswered questions following the decision announced this week by the Swedish authorities to close the 34-year investigation into the assassination of Olof Palme. The Swedish premier was gunned down in the street outside a cinema on 28 February 1986, a week after granting the ANC an effective diplomatic presence in Sweden.

Palme and his “kitchen cabinet” of close friends, including Lars Gunner Eriksson of the International University Exchange Fund (IUEF) in Switzerland were deeply involved in trying to establish, with ANC president OR Tambo, a “third way” anti-apartheid force. This would have made it impossible for the Pretoria government and its Western allies to portray the ANC as being dominated by the SA Communist Party and, therefore, Moscow.

As such, Palme was a particular target for Pretoria. At that time, the apartheid state had also set up a number of clandestine “dirty tricks” units including Operation Longreach, headed by Craig Michael Williamson. This was the unit responsible for the letter bomb murders of Ruth First in Mozambique in 1982 and of Jeanette Curtis and her six-year-old daughter, Katryn, in 1984.

But there were no direct leads to the Palme killing until the Truth and Reconciliation Commission began its work in 1996. It was then that Eugene de Kock, the last commander of the notorious Vlakplaas death squad, provided much of the evidence that exposed what the country got to know about the level of callous brutality carried out on behalf of the apartheid state.

De Kock said he had no direct knowledge of the Palme murder, but noted that former security police “analyst” and gun runner, Philip Powell, had told him that two of Williamson’s close associates, Jonty and Cindy Leontsinis, knew who had carried out the Palme assassination. Williamson subsequently denied all knowledge of involvement.

Jonty Leontsinis, a Johannesburg horticulturist who, with his wife, Cindy, operated within security police and Military Intelligence fronts linked to Williamson, were never investigated or interviewed by the TRC. Powell disappeared after flying to England, allegedly to study for a postgraduate degree.

But, in 1997, something of a floodgate opened: Mozambican police arrested two “street urchins” who had been hired to set fire to the yacht of a local businessman, apparently as part of a personal feud. The children identified the man who had hired them as Nigel Barnett, an apparently long-established business figure.

The police could not at first believe what they found when they raided Barnett’s home. Perhaps, having spent more than a decade based in Maputo without being detected, he had become careless. Or perhaps he was simply arrogantly confident. Whatever the reasons, the paraphernalia, passports and other documents found made it clear that, if nothing else, the man was a spy.

What the police discovered were several identity documents, all genuine, but with photographs that could almost have been of different people, with or without beards, moustaches or being clean-shaven and with different hairstyles. Two were in the name of Nigel Barnett. But there was also one for Nicho Esslin. And, as it later turned out, Henry William Otto also featured as did, of course, Henry William Bacon.

It soon transpired that the spy had first been posted to Maputo by South African Military Intelligence in 1984, had travelled widely, and had continued to be paid by the post-apartheid government’s security services, a fact that still needs to be explained. Because it also emerged that Nigel Barnett was an acknowledged master among that small band of human flotsam that constitute his peers. He was known as “Mr 200 per cent”, one of that rare group who excel as both agents — spies — and operatives or “men of action” or, not to put too fine a point on it, killers.

As Barnett’s background became known, he was catapulted into the front ranks of suspects in the Palme investigation. He was born Leon van der Westhuizen, in May 1949, put up for adoption and subsequently adopted by Henry Bacon and his Swedish-born wife Amanda, who named him Henry William Bacon. His adoptive mother also taught him Swedish, a language he maintained after going into the South African army and then the navy as a diver before heading north to join the British SA Police in the “Rhodesian bush war”.

It is here that Henry Bacon excelled in information gathering, interrogation and “pseudo operations” and where he became accustomed to the use of disguise and false identity. As minority rule crumbled, it seems that he was recruited to South Africa’s murderous and clandestine Directorate of Covert Collection (DCC) by one of its leaders, Colonel At Nel. It is from here that his various identities emerge, along with the fact that, as a Swedish speaker, he made frequent trips to Sweden where the apartheid state built up a network of supporters, agents and informers.

Interrogated in Mozambique by local, South African, TRC and Swedish authorities, Bacon/Barnett insisted that he was not involved in the Palme assassination. He maintained that his spying role had been wholly mundane. But circumstantial evidence emerged that he had been in Stockholm on the night Palme was killed. The gun that had killed the Swedish premier was also a .357 magnum revolver, the weapon favoured by Bacon/Barnett.

However, Bacon/Barnett’s .357 magnum was later found in a safe deposit box in Durban. It was sent for ballistic testing and rejected as the murder weapon although it now transpires that the bullets found after the killing were too badly damaged to be able to trace them to any one weapon. In any event, assassins do not, as a rule, keep the weapons they use in such a killing. Stig Engström, now deceased, who was named this week as the prime suspect in the Palme killing, also owned a .357 magnum which the Swedish police have checked.

If Engström, a right-wing activist who was in financial difficulties, was responsible, did he act alone? Or was he bribed, hired or persuaded, on ideological grounds, to take action? All the Swedish authorities can say is that Engström is the prime suspect for having pulled the trigger and that “there is not enough evidence” of a link to South Africa.

They may hope that this will put paid to the case, but it is a forlorn hope. There are even more loose ends than exist in the case of the assassination of John F Kennedy. And, like the 134 apparent publicity seekers who confessed over the years to having shot Palme, conspiracy theorists galore will continue to have a field day while some dogged investigators, more than three decades down the line, will continue to question and to search for answers they may never find. DM