This article by the Daily Mail is an interesting barometre of discontent in the Tory Party.

And it comes before the worst of the Covid unemployment is felt.

This is the checklist:

SIMON WALTERS: I fear Boris Johnson is heading for MAJOR trouble – sex scandals, economic meltdown, a resurgent opposition… has the PM learnt nothing from the storms that sank his predecessor?

By SIMON WALTERS FOR THE DAILY MAIL

Here is a political quiz question: which Conservative leader is described below?

He deposed a female Prime Minister in a coup, won an election against all odds, but was hit by an economic tsunami, parliamentary sex scandals, claims of arrogance and EU tensions that saw his ratings tumble after more than a decade of Tory rule.

The obvious answer is Boris Johnson. But there is another answer: John Major. 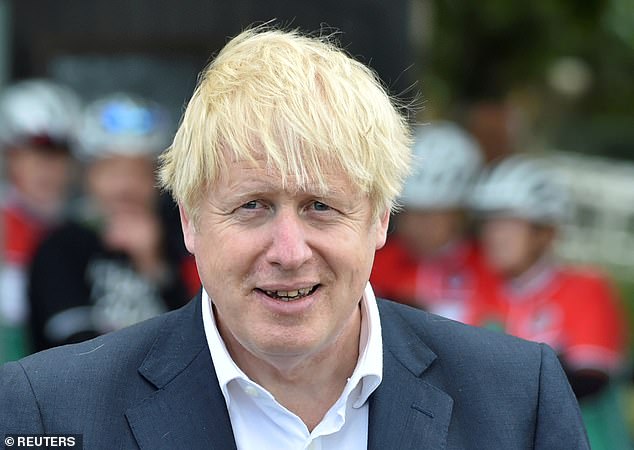 And as we survey the faltering performance of Johnson’s Government in recent weeks in a number of key areas, I can’t be the only one to feel a creeping sense of deja-vu that harks back to the Major era.

An air of complacency hangs over the Tories as we enter the August doldrums — one that poses a very real danger if it is not addressed.

You only need look at the creeping popularity of Sir Keir Starmer — whom a poll this week revealed to have overtaken Johnson as voters’ pick for who would make the best Prime Minister — to see a warning light flashing on the dashboard.

If the party is to avoid sinking further, then it would do well to remember how the rot set in for Major’s administration through a mix of incompetence, arrogance and misfortune.

The Government raised interest rates to 15 per cent in the ensuing panic, triggering fury among voters. They never forgave Major. 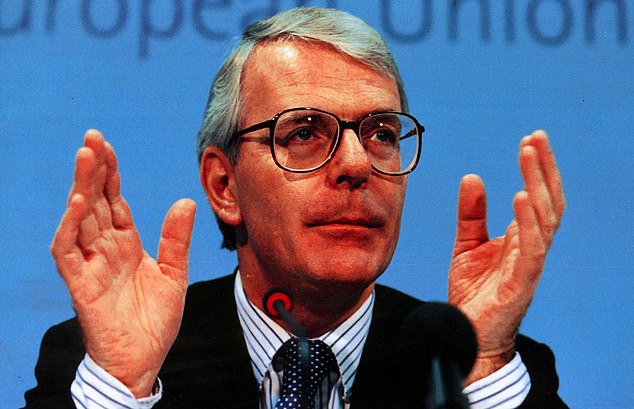 If the party is to avoid sinking further, then it would do well to remember how the rot set in for Major’s administration through a mix of incompetence, arrogance and misfortune

A year later he made his ill-fated populist ‘Back to Basics’ speech at the 1993 Tory conference, seen by critics as an attempt to link his policies to moral values.

When the mirror was turned on the moral probity of Mr Major’s own MPs, it was not a pretty sight, not least when married Tory Minister Steve Norris was revealed to have had affairs with five women.

The scandals came thick and fast: Politicians having sex with their secretaries, illegitimate children, MPs paid ‘cash for questions’ and profiting from Tory ‘right to buy’ council house laws.

After 18 years in power, it looked as though the Conservatives thought they could get away with anything: double standards, sleaze, cronyism and contempt for the electorate. Throw in Tory wrangling with Brussels and a resurgent Labour Party under Tony Blair, and the upshot was Mr Major was thrashed in the 1997 election.

If Mr Major’s own affair with Conservative MP Edwina Currie in the 1980s — not disclosed until 2002 — had been made public when he was leading his moral crusade he would probably have had to resign in office.

Compare and contrast with Boris Johnson: he has had countless affairs, will not say how many children he has fathered, got divorced the year he won power, moved his girlfriend into Downing Street, had a baby with her and is yet to marry her.

Unlike Mr Major, he was wise enough not to link his manifesto with morality and so cannot be accused of hypocrisy.

Indeed, the personal popularity that saw Boris Johnson help win the EU referendum, the Tory leadership contest and an election landslide, suggests that his flaws are part of his unique appeal.

But at critical junctures over the past months, he seems to have taken that popularity for granted. There is a narrow boundary between Old Etonian charm and entitlement that Boris has crossed all too frequently.

He spent some of the first two months on a Christmas/New Year break ensconced with partner Carrie Symonds in luxury on the Caribbean island of Mustique, refusing to name exactly who had provided him with the perk.

He ignored pleas to visit parts of the country devastated by floods in the New Year and missed the first five meetings of the Cabinet’s ‘Cobra’ committee at the start of the coronavirus pandemic.

When lockdown was imposed, and normal families were scrupulously obeying government edicts, he refused to sack either his chief adviser Dominic Cummings or Environment Minister Robert Jenrick when both were accused of breaking the rules — an error that has caused lasting damage to his party’s reputation over the handling of the Covid crisis.

And more recently he has packed the Lords with 36 new peers including a wealthy Russian-born chum, Evgeny Lebdev (son of a former KGB spy turned oligarch); his own brother Jo Johnson (a middle-ranking former minister of limited experience), and a city tycoon, Michael Spencer, who has given the party £5 million.

On top of this ‘cronysim’, the Conservative Party has been hit by a series of ‘Back to Basics’ style sex scandals in recent weeks.

Delyn MP Rob Roberts, who recently announced he is gay, is being investigated over claims that he invited a female intern to ‘fool around with no strings’ and told her she had ‘lovely legs’ after splitting from his wife.

Then there are growing concerns over his party’s management of the economy. When Mr Major’s Government was hit by ‘Black Wednesday’ he tried to save jobs and businesses by pumping billions into the economy. Voters might have given him the benefit of the doubt had they not thought the entire Conservative Party had grown out of touch.

Mr Johnson has spent many more billions trying to repair the damage inflicted on the nation by coronavirus while preparing for further Brexit turbulence when the UK finally stops following EU rules in December.

It is too early to say if he will succeed, though the fact that the Bank of England has confirmed we are facing the worst recession for a century illustrates the scale of the problem.

In the Prime Minister’s defence, unlike ‘Black Wednesday’ no one could reasonably blame the Tories for a global pandemic.

But his reluctance to reinforce the message that workers must get back to the office to help revive the economy, while the scale of job losses grows more apparent day by day, suggests he has not made it the priority he ought.

By the time of the 1997 election Mr Major had got the economy back on track — but a fat lot of good it did him. The jury is still out on Mr Johnson’s handling of Covid but he will have to hope the electorate is more forgiving of him than it was of Mr Major.

It it worth noting that at the next election, due in 2024, he will have to engineer a feat no political party in Britain has managed to pull off for 200 years: lead his party to win, to all intents and purposes, five general elections in a row.

(Allowing for the fact that David Cameron led a Tory-Lib Dem Coalition in 2010-15 and Mrs May led a minority Tory Government.)

If the Prime Minister is to succeed, he needs to show the country he and his party are governing for the people as he promised — not just for themselves.

Like Mr Major, a weak Left-wing Labour leader in the form of Jeremy Corbyn rather than Mr Kinnock, helped Mr Johnson win his first election.

Like Mr Major, it won’t be so easy next time round when he is likely to face a revived Labour Party under its new leader.

How ironic it would be if Boris, the man who hoped to be a leader like his idol Winston Churchill, instead endures the fate of a much-mocked Prime Minister best remembered for allowing his party to drift onto the rocks. 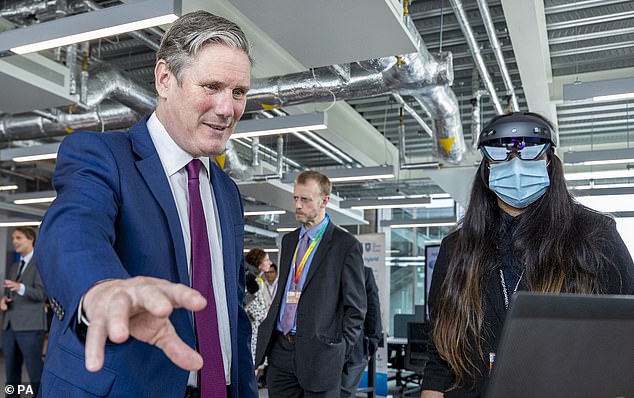 You only need look at the creeping popularity of Sir Keir Starmer — whom a poll this week revealed to have overtaken Johnson as voters’ pick for who would make the best Prime Minister — to see a warning light flashing on the dashboard. He is pictured during a visit to Flintshire in north Wales