The former president’s supporters threaten to resort to violence again in a deeply divided country, putting its democracy on the line and its economy in peril. 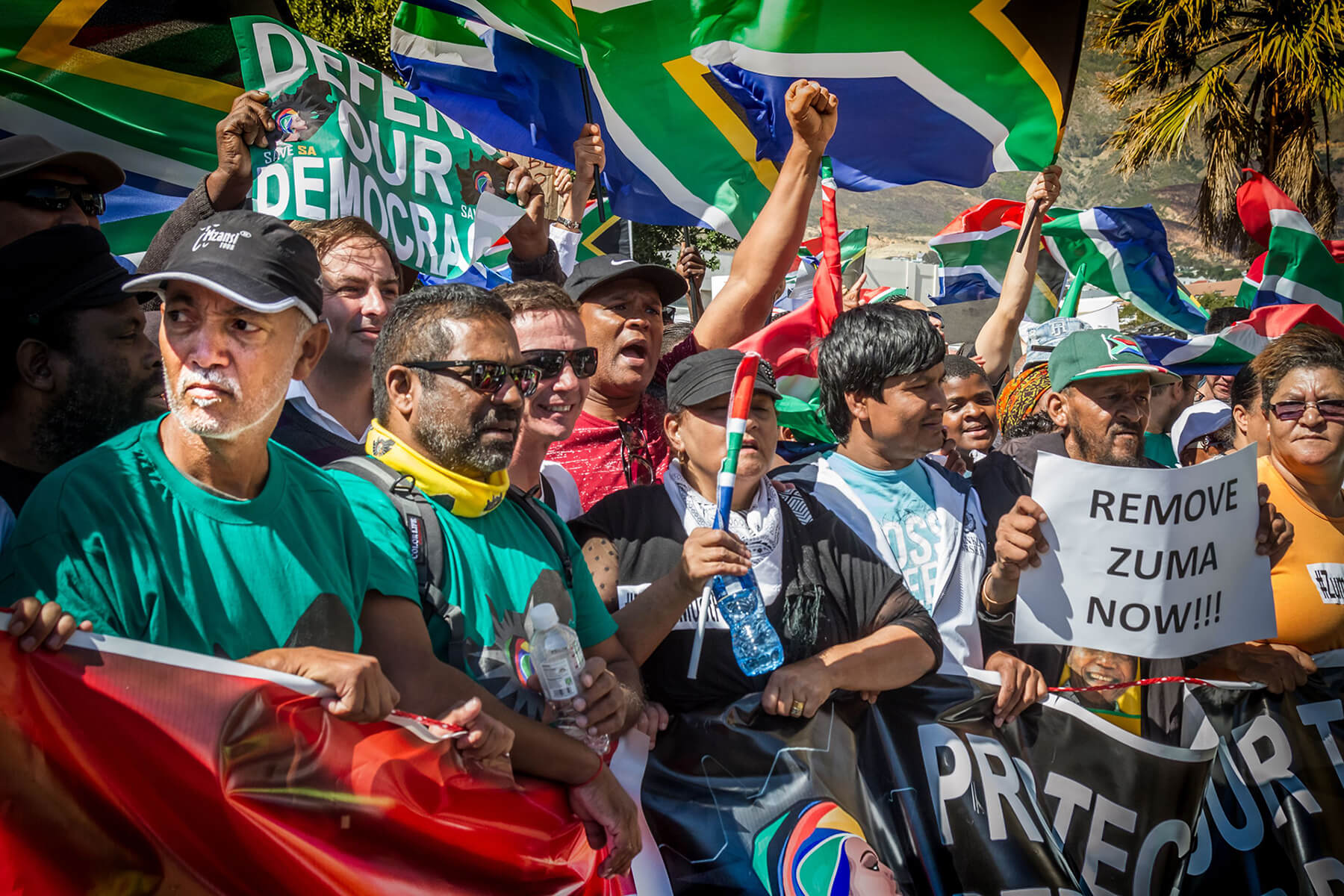 Thousands of people march to Parliament in Cape Town, South Africa, to demand that the President of South Africa, Jacob Zuma, step down immediately because of his corrupt rule. © Charles HB Mercer/Shutterstock

The former President of South Africa, Jacob Zuma, is the glowering figure who looms large over the country’s future. The 80-year-old is determined that never again will he suffer the ignominy of being jailed — despite being charged with hundreds of counts of corruption in a case that has dragged on for nearly 17 years. Zuma has pleaded not guilty to corruption, money laundering and racketeering in a 1990s $2 billion arms deal that he promoted.

To head off any chance of being imprisoned, he has deployed the so-called “Stalingrad defense.” This is a term for a legal strategy of stalling proceedings based on technicalities. Zuma’s lawyers are fighting every attempt to put him before a judge on the basis of arcane technicalities. Finally, this strategy is wearing thin and Zuma’s supporters are now resorting to alternative tactics.

This is not the first time that Zuma faces time in prison. Last year, the Constitutional Court of South Africa found Zuma guilty of contempt of court and sentenced him to jail for 15 months. Zuma’s supporters took to the streets in KwaZulu-Natal and Gauteng. They blocked roads, assaulted people, and looted and burned supermarkets.

When Zuma’s legal team were in court on April 11,  they reminded the court of what had happened. They warned the judge that the riots that ensued after his jail sentence last year resulted in the deaths of more than 350 people. Zuma’s lawyers claimed that the riots “were partly motivated or sparked, to whatever extent, by a sense of public outrage at perceived injustice and special treatment of Mr Zuma.” They were making an obvious threat.

It is important to put Zuma’s July 2021 riots in context. The country’s most notorious mass killing remains the Sharpeville massacre of March 1960.

This occurred during the era of apartheid. The massacre cost 69 lives as the police fired into a crowd. The Zuma riots cost many more lives than the Sharpeville massacre.

To contain the 2021 riots, South African President Cyril Ramaphosa had to deploy 25,000 troops. He admitted that he had no prior warning from his intelligence services of the scale of the unrest. This is unsurprising. Zuma was an intelligence agent for the African National Congress (ANC) and has strong links with South Africa’s security services. As the South African media have reported: “Former senior security agency and ANC members aligned with Jacob Zuma have allegedly instigated the unrest in Gauteng and KwaZulu-Natal. Citing sources in the intelligence community…these former agency members used intelligence networks to spark the riots.”

The government made promises to bring those who instigated the Zuma riots to justice.  Duduzile Zuma-Sambundla, Zuma’s daughter, was one of those accused of stoking the riots. She and none of the major figures allegedly behind the Zuma riots have been held accountable. Of the 3,000 suspects arrested, all of them have been small-fry.

Constitutional Challenge And Risk of Becoming a Failed State

Many ANC leaders, keen to stave off allegations of wrongdoing, have muttered darkly about the constitution for years. KwaZulu-Natal Premier Sihle Zikalala recently criticized the courts, saying “It is time we should debate whether the country does not need parliamentary democracy where laws enacted by Parliament should be above all and not reviewed by another organ…” Ironically, Zikalala is calling for a return to parliamentary supremacy — the hallmark of the apartheid years.

There is a real cost to such maneuvers by ANC politicians. In its December conference,the party will elect a new leadership. If some ANC members have their way, they could even remove Ramaphosa, although this seems unlikely as of now. Nevertheless, the ANC’s branches and its provincial structures are experiencing a bitter battle between the pro- and anti-Zuma factions. These factions are fighting for the support of the ANC’s 1.5 million members in meetings across the country, some of which are turning violent.

While the ANC is locked in internal battles, there are warnings that South Africa might be turning into a failed state. The government has failed to provide many essential public services already. The railways have been vandalized and looted so severely that no trains have run in the Eastern Cape since January 7. Critical coal and iron ore exports are grinding to a halt because of cable theft  that has gone unchecked for years because of South Africa’s systemic corruption.  As per Bloomberg, “more than $2 billion in potential coal, iron ore and chrome exports were lost” in 2021.

The failure of the electricity supply system is so chronic that it is hardly remarked upon. In the Cape, the opposition Democratic Alliance has plans to dump the state electricity provider — Eskom — and establish its own power supply.

In a September 2020 report, Eunomix warned that “bar a meaningful change of trajectory, South Africa will be a failed state by 2030.” The remarks were echoed in March this year by the treasury director general Dondo Mogajane. He took the view that, if South Africa continued on its present path, it could indeed become a ‘failed state’ with “no confidence in the government, anarchy and absolutely no control in society.”

In April, Ramaphosa was forced to respond to Mogajane. The president adamantly declared that South Africa was “not a failed state yet and we will not get there.” Ramaphosa claimed that his government was taking steps to rebuild South Africa’s capacity and fight corruption. This claim remains an admirable but unfulfilled ambition.

Zuma has not been brought to court and his associates are locked in battle with Ramaphosa’s supporters for control of the ANC and the country. Meanwhile, growth rates slide, unemployment rockets and poverty remains endemic. Even as South Africa is on the slide, the world’s attention is elsewhere. This is a tragedy. Africa could lose one of its few genuine democracies and see the collapse of its largest economy.