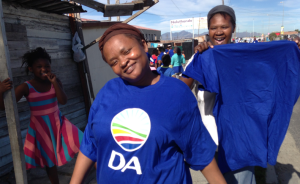 By Thursday between one in four and one in five South Africans will have voted for the DA, if the opinion polls are remotely right. The majority of this support will come from be black South Africans – the African, coloured and Indian population who have lived under the ANC and found it wanting.

While we should of course have the humility to wait until the electorate has actually voted, this is the clear direction of travel. Of South Africa’s three major cities the DA will retain its Cape Town fortress, Gauteng will be contested and only Durban will remain firmly in the ANC’s grasp.

For a party that won 1.7% of the vote twenty years ago, this is an extraordinary achievement. But these simple facts seem to have evaded the grasp of most South African commentators obsessed with Oscar Pistorius or mesmerised by “Commander in Chief” Julius Malema’s antics.

What the chattering classes ignore is that the DA’s leadership and – more importantly – its support base now truly reflects this “rainbow nation.” It is the ANC, which has become the exclusive party.

It is the teacher who could not bring herself to pay a bribe to her union to win advancement, the Durban shack-dweller under attack from ANC thugs and the Aurora miner, unpaid for 18 months by President Zuma’s nephew, while R1 million was donated to the ANC’s election chest.

It is not that they wanted to leave the ANC, but the ANC which left them behind. While the ANC leadership can raise champagne glasses to their success, there is precious little that flows beyond its magic circle.

What happened on the mines is perhaps the best example.

It was the NUM, of which Cyril Ramaphosa was once such an illustrious leader, which abandoned its members. Who will forget his emails 24 hours before the Marikana massacre in which he allegedly called for ‘concomitant action’ against ‘criminals’ by the police? Who can ignore the fact that NUM shop stewards had their salaries paid by the company, resulting in a gulf between them and their members? How could a union end up arming its officials against the members it is meant to represent?

No surprise then that NUMSA is planning an early exit from the ANC’s grasp.  This will, of course, only take place once the election is done and dusted. But if NUMSA forms a new party of the left together with other unions then the political landscape will be transformed.

That lies very much in the future, but the prospects for Wednesday’s election are clear. It is a two-horse race.  Only the ANC and the DA will win significant support. Malema’s EFF may pick up 4 or 5%, but who else is really likely to make a showing?

For the older liberation parties like AZAPO and the PAC this could be the end of the road.  This will, of course, suit the ANC down to the ground.  The party has always regarded other liberation movements with disdain, treating them as illegitimate upstarts.

I know from my time with the British Labour Party in the late 1970’s that the ANC attempted to win for itself recognition as the: “Sole Legitimate Representative of the People of South Africa.”  I opposed this attempt, arguing that it would fly in the face of the UN and the Organisation of African Unity, both of which recognised both the ANC and PAC.  If passed it could have resulted in the Labour Party having to request permission from the ANC for talking to the emerging non-racial unions, or even Helen Suzman.

The ANC did all in its power to undermine me, but in this they failed. These events did, however, convince me of the ANC’s determination to eliminate its rivals.  No wonder Jacob Zuma can still go around suggesting his party should rule until the second coming of Christ!

But the prospects for Wednesday are clear: only the ANC and DA are making the running, with the DA beginning to erode the ANC’s monopoly.

Martin Plaut is an author and former BBC Africa editor and Labour Party Africa adviser. He has spent the past 2 months in the DA headquarters.