The world is a brutal place. And the news agenda is relentless. So a tragedy today is forgotten tomorrow.

But some images and stories live in the mind and the story told by Chris Cotter is certainly among these.

The desolate refugee camp the Afar Eritreans live in – not a blade of grass to be seen anywhere – is unforgettable. And the bitterness of exile – the years of waiting for a welcome from anyone other than the Ethiopian authorities – is heartbreaking.

Chris is not your average professional documentary maker: perhaps that’s why his story is told with such compassion and such sincerity.

He was just an average American boy from outside Philadelphia, who liked to travel. He had been to Africa before; climbed Kilomonjaro. But somehow the fleeting glimpses into the lives of the people he met were not enough.

Chris sought out a story that he could really tell, and stumbled across Eritrea, a country he knew nothing about.

But, after meeting Eritrean exiles on a demonstration in Washington, he was soon hooked.

He was lucky enough to be briefed by an American he met who had lived in Asmara in the 1970’s as an aid worker.

So finally, saying goodbye to his faithfull dog and with a camera in his rucksack and a friend by his side, Chris set off to the refugee camps in northern Ethiopia. 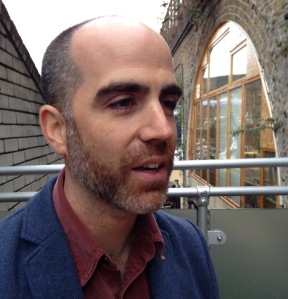 His travels took him to the desolate camps that are home to some 130,000 Eritrean refugees.

And he patiently heard their stories: of how they fled from the endless military conscription; of shots fired at them on the border; of the abuses and torture at the hands of human traffickers.

Finally he visits Israel, only to find a cold and hostile reception from large segments of society, although this was mitigated by the genuine warmth and support from some truly remarkable Israeli activists.

This hour-long film is not without its faults: it is a bit rough around the edges and could do with editing. But its sincerity and authenticity shine through.

Chris Cotter is now looking for a distributor – I wish him well. This is a documentary that deserves a wide audience.

2 thoughts on “‘The Eritrean Exodus’ – A remarkable documentary”