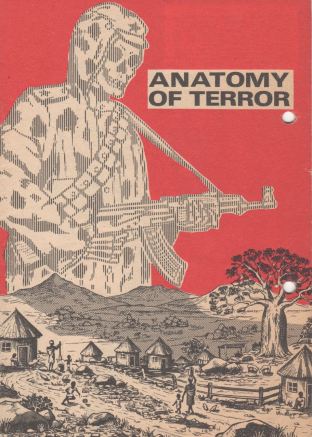 This story carries a health warning: it contains some terrible images.

So if you are of a queasy disposition, don’t proceed.

The subject is a small booklet that I have had since 1976.

It was distributed in the halls of residence at the University of the Witwatersrand, at which I was a student.

It made no bones about its authorship: this was the product of the Ministry of Information, Immigration and Tourism of the government of Rhodesia. They were the mouthpiece of the Ian Smith regime.

Like most students at Wits I flipped through it, but soon disregarded it as no more than propaganda.

The photographs of the atrocities carried out by what were termed ‘terrorists’ were clearly fakes.

We knew better: they could not possibly have been carried out by the freedom fighters of 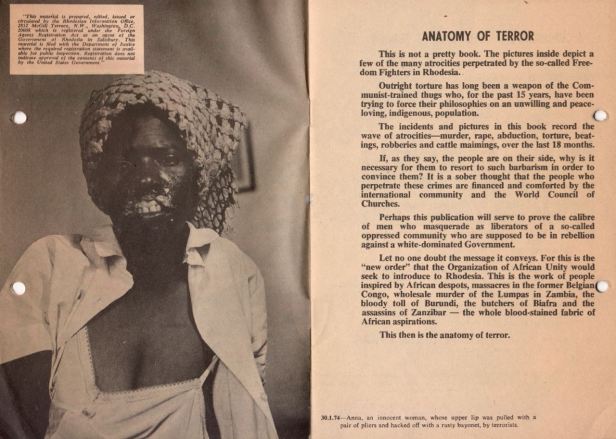 Zanu, who were bravely coming across the border from bases in Mozambique to attack the forces of white reaction.

The image of communist, gun toting killers haunting peaceful African villagers could not possibly be correct.

We were facing the allies of ‘good old Smithy’ in our own apartheid government.

In June 1976 the same authorities mowed down perhaps as many as 200 children in a single day, at the start of the Soweto uprising.

How could we possibly believe them, or their allies in Salisbury – as Harare was then known.

Today I am not so sure.

After all the appalling atrocities that Mugabe has inflicted on his own people, from the Gukurahundi massacres onwards, I think that perhaps I – and others on the left – were wrong.

Was this not the hallmark of Robert Mugabe: of the intolerance of different points of view that has left Zimbabwe bankrupt in every respect? Did he tolerate, if not actually encourage, such terrible acts?

The Ian Smith regime committed atrocities of its own, but these were debated and acknowledged internationally at the time. The crimes of the ‘freedom fighters’ we supported were not.

It is not a happy thought.

One thought on “Rhodesia, Mugabe and terror”