The Reuters story  below sums up the current situation. Underneath it is my timeline of how this crisis developed.

West African leaders to tell Gambia’s Jammeh to step down

The show of unity by regional leaders came as diplomats said the United Nations Security Council would meet behind closed doors later to discuss Jammeh’s refusal to hand over power.

Jammeh had quickly conceded defeat to his challenger Adam Barrow in the Dec. 1 presidential election, but in a volte-face that drew international condemnation he then said he would challenge the result in the Supreme Court.

The election had appeared to end Jammeh’s authoritarian 22-year rule was widely seen as a chance to end repression in a country seen by many as a police state.

“These heads of state will ask him to leave power,” the foreign ministry of Gambia’s neighbor, Senegal, said in a statement. It called the trip “a last chance mission for Jammeh”.

Gambia’s Communications Minister Sheriff Bojang was not reachable for comment on Monday.

Barrow told Reuters in the capital Banjul that Jammeh had made a mistake, shocking the world, and said he hoped Johnson Sirleaf’s delegation would ensure an “expedited transitional period” that paved the way for a transfer of power.

“We are not talking about a military option. We want to safeguard our democracy and we want peace,” he said, but added that he was concerned for his own security.

“I have no official security. As president-elect, I should not be exposed in the way I am today,” he said.

Barrow said he had not had any communication with Jammeh’s government since the president’s televised announcement on Friday.

Jammeh seized power in a coup in 1994 when he was an army lieutenant and has ruled ever since, wining four elections that were criticized by rights monitors and surviving several coup attempts. International human rights groups accuse him of widespread violations and repression.

He declared Gambia an Islamic Republic last year and in October announced its withdrawal from the International Criminal Court.

A statement from Barrow’s opposition coalition called for Jammeh to step down immediately.

Before his surprise change of mind, he had pledged to hand over power to Barrow in January following the transitional period dictated by Gambian law.

Gambia has no sitting Supreme Court, and so in order to hear Jammeh’s complaint, legal experts believe at least four judges must be hired.

“We do not recognize that the outgoing president has the constitutional authority in the last days of his presidency, to appoint any Supreme Court judges in the Gambia for the purpose of receiving his petition,” opposition figure Mai Fatty said.

The United States, European Union, African Union, United Nations and ECOWAS have all pressed Jammeh to respect the result.

How the coup took place 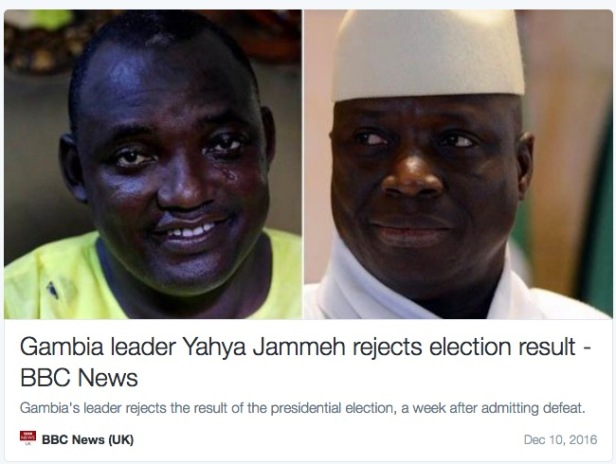 There is every indication that the outgoing president of the Gambia, Yahya Jammeh, has staged a coup.

It seems he preferred to be in power – as he promised – for a billion years, rather than life in prison [see below].

Not surprising, perhaps. After all that’s how he came to power in this – Africa’s smallest country – 22 years ago.

So it was something of a surprise when he publicly accepted the outcome of the election, leading to wild celebrations.

Perhaps the first indication that things might go wrong came when it was reported that Fatoumata Jallow-Tambajang, the architect of the coalition, and a senior politician considered the mother of the nation, announced that Jammeh would be prosecuted.

This was how the story was reported by the Guardian:

In an extraordinary speech on Friday, Jammeh said he wanted to return to his farm to “eat what I grow and grow what I eat” – his favourite political slogan. But Jallow-Tambajang claimed that on this farm, in Kanilai, close to the Senegalese border, he had the “bunkers and treasure” to start an insurgency and the coalition feared he could move weapons out of the country.

“He can’t leave. If he leaves, he’s going to escape us,” she said. “We are stopping him from leaving. We are negotiating. He said he wants to go to Kanilai. Any day he tells us he wants to go abroad, then we say no. It’s the presidential prerogative.”

She said the government wanted him prosecuted quickly in case he tried to flee – although it had not yet decided whether to try him in the Gambia or internationally. The government also planned to rejoin the international criminal court – Jammeh withdrew the Gambia from it, so the president who once vowed to bury opposition figures “nine feet deep” could find himself at The Hague.

Faced with the threat of being on trial and jailed, Jammeh acted.

Monica Mark also reported that there were a number of soldiers on the streets of the capital, Banjul.

This was confirmed in other tweets – like this one. I have removed the name, for fear of putting the person who sent it in danger.

Then well known West Africa observers, like Jeffrey Smith put this out:

By this time it was pretty clear that something bad was under way. I responded by tweeting:

The news was confirmed by Reuters and the BBC

It was really time for African leaders to act. After all, it was just seven days ago that the African Union chairperson, Nkosazana Dlamini-Zuma, welcomed the Gambian election, saying: “The AU Commission Chairperson hails the statesmanship of outgoing President Yahya Jammeh, for gracefully accepting the outcome of the elections.”

The AU has now issued a press release, calling for President Jammeh to step down peacefully.

I was told that Liberian President, Ellen-Johnson Sirleaf, was planning to travel to the Gambia on Saturday (today).

That appears to have been shelved – as my former colleague has reported.

Meanwhile, the US State Department has put out a strongly worded statement:

We strongly condemn President Jammeh’s December 9 statement rejecting the December 1 election results and calling for new elections. This action is a reprehensible and unacceptable breach of faith with the people of The Gambia and an egregious attempt to undermine a credible election process and remain in power illegitimately.

We call upon President Jammeh, who accepted the election results on December 2, to carry out an orderly transition of power to President-Elect Barrow in accordance with the Gambian constitution. We call upon all institutions in The Gambia, including the elected leadership, the armed forces, religious leaders, political parties and civil society organizations to reject violence and peacefully uphold the will of the people that was expressed clearly through the ballot box. The people have spoken and it is time for Gambians to come together to ensure a peaceful transition to President-elect Barrow.

At the United Nations there have been calls for an emergency meeting of the Security Council.

First, the UN Security Council called on outgoing President Jammeh “to respect the choice of the sovereign people of Gambia, as he did on 2 December, and to transfer, without condition and undue delay, power to President-elect Adama Barrow.”

Secondly, Senegal’s president has called on Gambia’s leader to respect the results of the country’s Dec. 1 election that saw President Yahya Jammeh lose to his rival.

President Macky Sall of Senegal, which surrounds Gambia, late Saturday joined the calls for a peaceful transition in Gambia, where tens of thousands of Senegalese reside.”

Perhaps more importantly, there were suggestions that Senegal was deploying troops along its border. For what purpose is not clear.